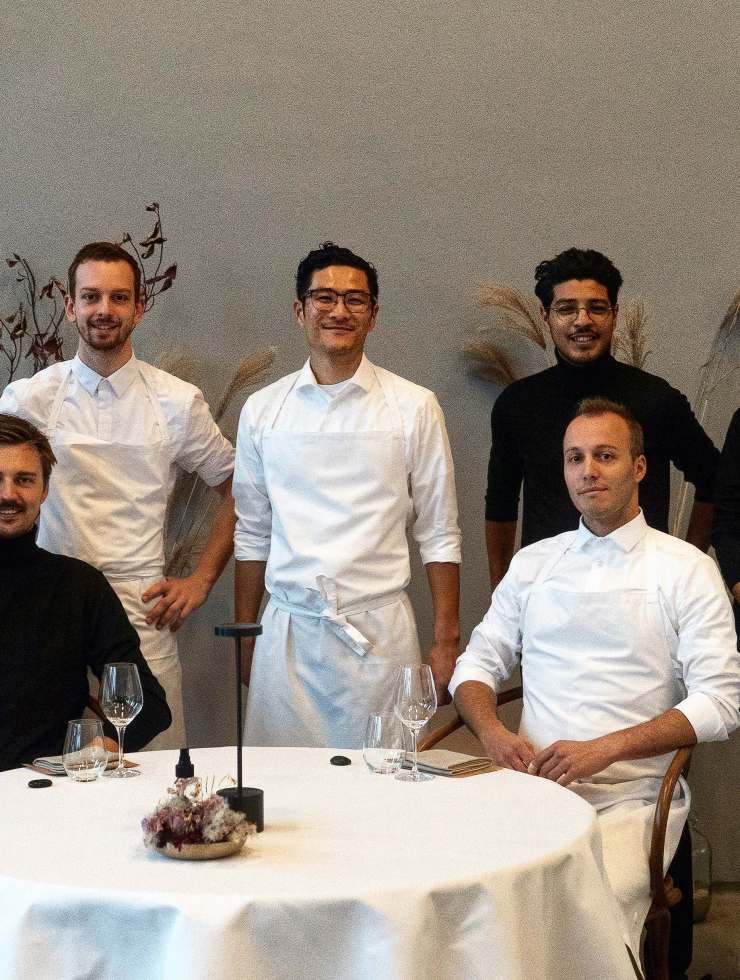 “I’ve always been very conscious of being adopted. But instead of viewing it as a weakness, I now view it as my strength.”

Born in Seoul but adopted by a Danish family, a young Kristian Baumann – in the chef’s own words – “looked different to all the other kids on the football team”.

Although Copenhagen isn’t Baumann’s birth-city, it is the city in which he cemented his reputation as a key figure in New Nordic food. His career features stints at landmark dining rooms including Noma, Relae, Manfred’s and, most recently, 108, a multi-function restaurant, cafe and wine bar in the former Noma space on the Copenhagen waterfront. Sadly, Covid-19 and a lack of travellers forced Baumann and his partners to close 108 in September after five years of trade. While those closest to Baumann expected the 34-year-old chef to wait out the (typically quiet) Danish winter before returning to the kitchen, our man had other ideas.

Enter Koan, a pop-up restaurant inspired by Korean food, culture and art that opened in early October will operate out of Copenhagen distillery – and fellow member of the extended Noma family – Empirical Spirits until the end of the year. For Baumann, the decision to re-enter the fray was driven by two things: ensuring he could re-employ some of his former 108 staff, and wanting to reconnect with and celebrate his Korean heritage.

“I really identify with Korea,” he says. “When I’m there riding the metro alone I feel at home. Everyone looks like me. I look like them. It’s a very strange feeling. I have a lot of love for Korea.”

Since his first trip to Korea in 2017, Baumann has made a Korean research trip an annual event. Food, unsurprisingly, features prominently on his itineraries with Baumann seeking out everything from traditional Korean royal court cooking and back-alley barbecue to the country’s Buddhist-inspired temple food. (Baumann: “it’s beautiful and so relaxing and definitely something that I’m drawn to as a person as well as a chef. It’s very inspiring”).

These Korean connections manifest themselves at Koan (in Zen Buddhism, a koan is a riddle designed to provoke deep thought) in different ways. The plates, for instance, have been thrown by Korean potters, and Korean chilli makes appearances at different stages of guests’ 13-course dinners. Not that an evening at Koan is a giant kimchi love-in, of course: cured squid brushed with a combination of squid garum and a sesame-esque paste is a riff on sannakji (raw live octopus). A roasted barley ice cream is both a nod to nuruk – Korea’s equivalent to Japan’s koji – as well as the extended Noma family’s collective obsession with fermentation. Traditional Korean this ain’t, but for Baumann, not having to cook Korean food “the right way” has enabled him to create his own Nordic-Korean cooking style.

“I’ve always been very conscious of being adopted,” says Baumann who jokingly refers to himself as a “plastic Korean”. “But instead of viewing it as a weakness, I now view it as my strength.”

While the food at Koan is as intricate and ambitious as what Baumann was serving at 108, Koan is a more intimate affair. Each service is limited to just a single seating of 40 guests – at the time of publication, dining restrictions in Copenhagen require all guests to leave a restaurant by 10pm – and the roster at Koan numbers just eight: three chefs and five front-of-house staff. (By comparison, 108 had, in its heyday, a pool of 85 employees).

Although Koan’s residency at Empirical Spirits finishes at the end of the year, Baumann and his partners Lasse Peder Nielsen and Marco Bottin – the restaurant’s general manager and head chef, respectively – hope Koan will have a permanent home in 2021.