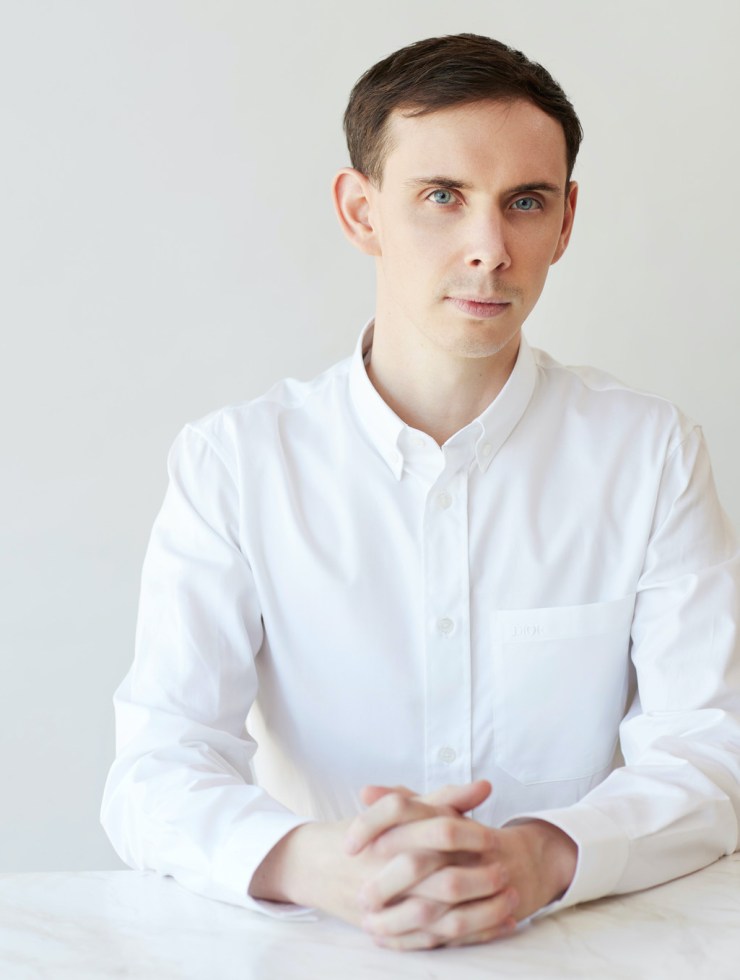 Get ready to see a lot more Daniel Calvert on your Instagram feed. Or at least his cooking, anyway.

Only this time instead of pigeon pithiviers, weightless mille-feuilles and other hits from Calvert’s four-year tenure at Hong Kong neo-bistro Belon, eaters should be on the look-out for blue mackerel “escabeche”, sourdough polenta bread, and dainty ramekins filled with sudachi-spiked caviar: three of the dishes at Sezanne that have emerged as front runners for signature-dish status.

For those with a taste for French cooking, Sezanne, the new in-house restaurant at Four Seasons Tokyo at Maranouchi that opened today, is an irresistible prospect. A firebrand young chef with a formidable resume; the backing of an international hotel chain that isn’t afraid to spend; plus an elegant dining space designed by Hong Kong-based designer Andre Fu. It’s a package set to thrill. Just as long as you can get in, of course.

With just 12 tables on offer and priority for bookings given to in-house guests at the 57-room hotel, it’s safe to assume the demand to dine at Sezanne will outweigh the supply, especially once international travel recommences.

“I’d like to think that we might get to a point where if you want a table at Sezanne, you have to book a room,” says Calvert, a Surrey-born, Per Se-trained chef who relocated to Tokyo in November. “That would be pretty cool.”

As executive chef of Four Seasons at Marunouchi, Calvert might be the public face of both Sezanne and its sister restaurant, Maison Maranouchi – a more casual bistro-style restaurant that opened at the start of June – but he’s just one of the hotel’s high-profile recruits. Elwyn Boyles, a one-time pastry chef at The French Laundry in the Napa Valley, will be overseeing the pastry side of things, while Simone Macri, formerly of Jaan in Singapore, has come aboard as Sezanne’s general manager. Factor in a new, custom-designed kitchen and a dining public with an appetite for French food and Sezanne looks destined to be one of 2021’s key openings.

Calvert talks to The Local Tongue about what diners lucky enough to snag a booking can expect.

“Tokyo has a reverence for the classic old-school Parisian palate. I’m not saying we’re going to build Le Maurice here, but I love that style of dining. It’s never going out of fashion and everyone craves it. Like, how much do you crave to go to Paris and sit at Le Bristol? I would love to sit there more than anywhere in the world and eat and drink. I think it’s fallen out of fashion because a generation of cooks didn’t learn how to cook in Paris. From an English standpoint, people went to New York, San Francisco and Australia. I’m not speaking any less of those cities, but when I went to Paris after London and New York, that’s when I truly learned how to cook. I’m not saying that you have to go to Paris to learn how to cook, but it’s just how it worked for me. But even if I went back 15 years, the style of food that I’m cooking now is exactly what I loved to eat back then. I don’t want to eat wood sorrel fluid gel or whatever. In 20 years’ time, I’ll still want to eat a sauce Perigourdine. Guys like Dan Hong and Jowett Yu were classically trained at places like Marque and Bentley. And yes, they did deviate to Mr. Wong and Ho Le Fook respectively and become masters of their new cuisine, but they could because they had such strong fundamentals.”

On buying the best ingredients

“The quality of the product in Tokyo is insane. Being able to get on a phone and call someone and have amazing product the next day definitely takes the headache out of things, but we don’t want to become these warriors of where we are and claim that Japanese terroir is what we’re all about now. Do I believe that certain things are better from Japan? Of course I do. Japanese venison is better than English venison, but turbot from France is still better than turbot from Japan. French asparagus is better than Japanese asparagus. And let’s not forget about beautiful Australian truffles which are better than Japanese truffles. You just have to make educated decisions and base your cuisine upon that.”

On the importance of producers

“When you sit down, you’ll have a welcome note from us that explains we’re a restaurant that collaborates with long-term suppliers. I have exclusivity on Petrossian caviar in the whole of Japan because of a relationship that’s born out of years of loyalty. I have a guy who shoots venison up in Hokkaido for us. I have 48-month-old Comte from Bernard Antony. I work with Truffle Hill who’ve been very loyal to us for years at Belon. This is what’s highlighted on the menu rather than a list of my dishes. To me, reading a list of suppliers and ingredients that we’re going to serve is more powerful than a menu.”

On the Sezanne menu

“We are going to be tasting menu-only. I hate to use the word, but it’ll be omakase-style, although we want to change it as much as possible. There’s amazing produce in Japan but it’s also quite scarce. We won’t have the same product for 40 guests a night because if we did, it wouldn’t be that special. We can only get beef from Muneharu Ozaki once every two weeks. The questions is how do I serve that in a way where I have enough product for everybody to make sure the menu is dynamic, and that everybody’s getting something special and feels great? I want multiple tables to have multiple menus on the same evening. I want a table of four to have a roasted chicken from Hokkaido. I want a table of six to maybe share a rib of beef from Kyushu. I want a single diner to maybe have a piece of venison saddle. I think that that’s the natural way to cook. The fact that I have all the products available – all the ammunition – there’s no reason why we can’t cook like this.”

“It’s going to be mostly French with a heavy Champagne focus. We’re named for Sezanne which is a region in Champagne that’s known for its blanc de blancs. Ulysse Collin is one of my favorite Champagnes and the winemaker Olivier Collin is from Sezanne. We have a beautiful Cristofle Champagne trolley which will serve different vintages by-the-glass that will change each day. You might sit down and have a Krug 1988 by the glass, or it could be a Veuve Clicquot 1990. We will likely have the biggest collection of Prieure Roch in Tokyo which will be quite a talking point. We have a direct relationship with Yannick Champ who’s the winemaker of Prieure Roch.”

On winning over Tokyo

“We want to be dynamic and give people a reason to come back and become a regular. We want guests to realise that they can enjoy themselves in the way they want and we will work with them. Maybe you just sat down and ordered a bottle of Bordeaux. I’m probably not going to give you a chicken for your main course. Or you ordered a Puligny-Montrachet, so I won’t serve you beef. I want to cook for people day-in, day-out and get to know their children’s names. I hope that locals grow to love the restaurant and we are adopted in Tokyo like we were in Hong Kong.”

Read Daniel Calvert’s guide to eating and drinking in Hong Kong like a local chef.