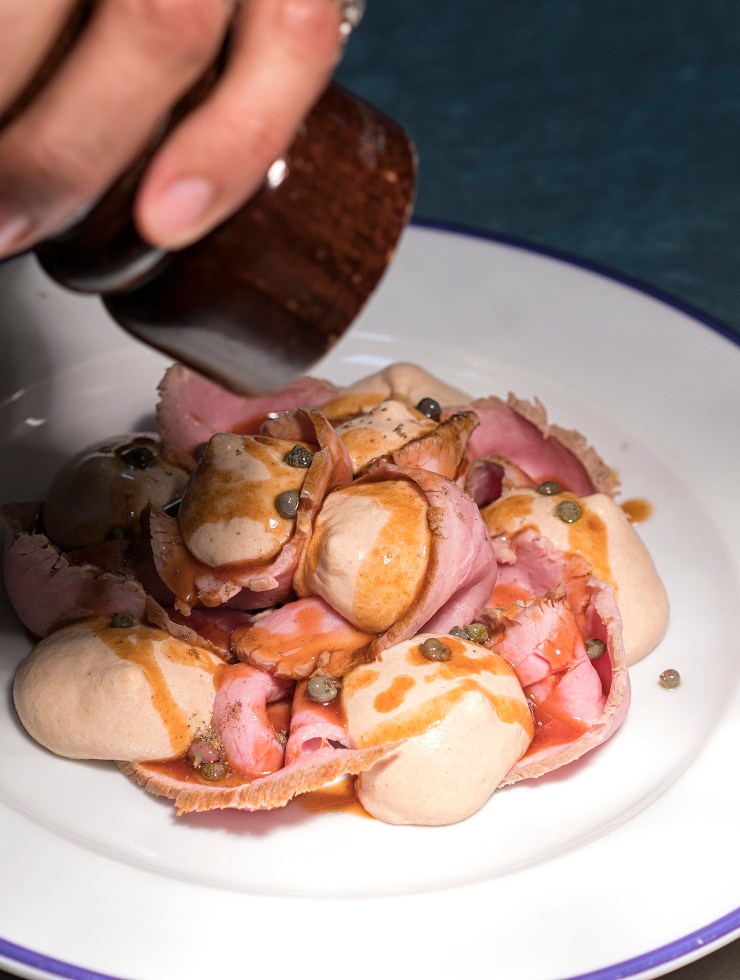 In this new content series, we take a closer look at signature dishes from your favourite restaurants around the world.

Vitello tonnato might have originated in the northern Italian region of Piedmont, but it belongs to the whole of Italy now. It’s easy to understand why: poached veal marinated in a mayonnaise-like sauce flavoured with tuna is a combination most eaters find hard to resist. Diego Rossi, however, isn’t most eaters.

“It’s a flat dish, it’s always grey and sometimes very dry,” says Rossi, the charismatic chef behind, Trippa, a Milanese neo-trattoria that’s turned heads for its delicious, democratic approach to Italian cooking. Born in Verona, Rossi learned how to make vitello tonnato the traditional way while he was cooking in Lombardy. Now that he’s running his own kitchen, Rossi has the freedom to change things up. “I tried to give new life to this dish that I don’t like.”

Based on the Insta-fame of Trippa’s vitello tonnato, it would seem our man has succeeded, not least because Rossi’s version stays faithful to the original. At the heart of the dish is the vitello (veal): whereas most recipes call for lean veal round (girello), Rossi prefers tri-tip (spinacino) and poaches it low and slow to keep the meat juicy. So far, so mostly traditional.

The dish’s tonnato – “tuna-like” – element, however, sees Rossi move a little further from the status quo. He starts by making a mayonnaise using tuna, anchovies and capers grown on Pantelleria, a hot and wind-swept volcanic island south-west of Sicily famous for its capers. The mayonnaise is then put in a siphon where it gets aerated to create a lighter, brighter sauce to partner the veal. More capers plus a jus made from roasted veal bones – a proxy for the caramelisation that happens when meat gets hit with high heat – finish the dish. The result is something that Rossi describes as sophisticated, juicy and lively: all the things bad vitello tonnato isn’t.

Although vitello tonnato has been on the Trippa menu since the restaurant opened in 2015, Rossi is the only person allowed to cook it, such is the dish’s importance to the identity of Trippa. Like any chef whose repertoire includes a signature, Rossi is grateful that guests come to his restaurant for the vitello tonnato: he just hopes they also find the time to taste the other things he and the kitchen have been working on.

“There are people that come to Trippa and only try the vitello tonnato, fried tripe and roasted bone marrow because these are the signature dishes,” he says. “I’m happy because I’m proud of all my dishes, but my favourite dishes are the nightly a la carte specials. Every day we change three dishes that we make by hand. For me, these are the real Trippa dishes.”