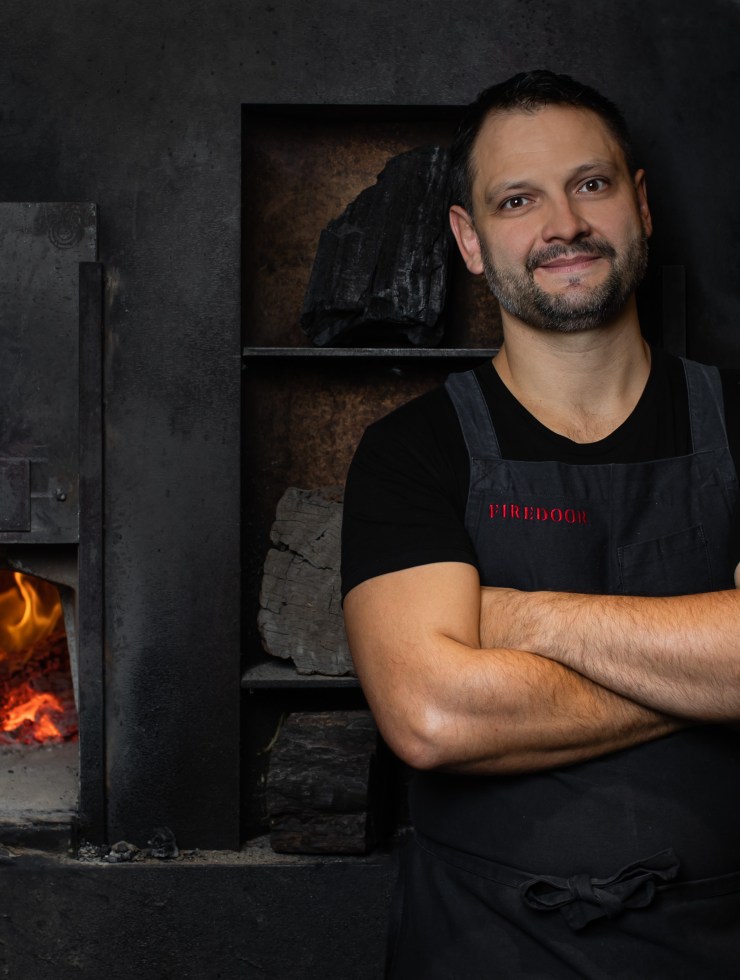 Diners come to Firedoor in Surry Hills to watch Lennox Hastie play with fire. A former head chef at legendary Basque grill Asador Etxebarri, Hastie is obsessed with exploring the magic that happens when prime Australian ingredients meet wood, fire and smoke. When he’s not at the (literal) coalface of his Sydney restaurant, these are the places the freshly minted Netflix Chef’s Table BBQ star likes to eat and drink at.

The Evolution Of An Italian Favourite

LuMi Dining is a husband-and-wife restaurant I’ve been going to for a while. The restaurant serves a courageous chef’s menu that’s broadly Italian but features Japanese finesse. Even though chef Federico Zanellato has put his prices up, it’s still ridiculously cheap. Anything that’s owner-operated is going to have that passion behind it because the owners have skin in the game and they’re going to put their heart in it. Federico is, like me, a little bit crazy but in a good crazy way. He’s super passionate about it and pouring his heart and soul into the restaurant and doing that little bit more each time. He’ll do something repeatedly till he gets it to that point where it’s amazing, but then he wants to get it even more perfect. There’s almost an obsessive quality about that. It’s really amazing to see, especially nowadays in terms of chefs and that attention to detail.

Italian Dining In Sydney Circa 2020

There’s been a huge surge in Italian joints. I think every city should have a restaurant like Ragazzi: an iconic Italian hole-in-the-wall that just delivers in spades. Scottie [chef Scott McComas-Williams] doesn’t disappoint with what he does in the kitchen. Because he worked with Frank [Camorra] at Movida back in the day, he manages to get a lightness and depth of flavour which comes from that Spanish background. It looks very simple on the surface but there’s a lot of depth of flavour to what he’s doing: I’d say more so than other joints. He does this goat rotolo which is like a stuffed, rolled pasta. The goat is cooked down slowly in a ragu and rolled inside that pasta. You get that beautiful thing where the edges of the pasta get this beautiful crisp edge before giving way to this rich, unctuous goat centre.

When I used to do consultancy for the Fink Group, Sagra was right on the doorstep of the head office. It’s a nice little go-to place and somewhere that’s always quietly ticked along in the background. The owners are running it on a fairly low-key basis and interchanging between who’s running the floor and who’s in the kitchen. It’s super simple, super tasty stuff – they’ll throw a pasta or some beautiful cheese on the menu – but very well executed. I’d describe it as Italian with an Australian slant. It’s in an old house and feels very homey. During the whole shutdown period, they were doing amazing stuff and helping the homeless and giving away food which is just incredible to see. They’re really grass roots and in touch with the local people and people who are struggling.

When chefs are in town, I tend to take them to Sean’s in Bondi for a long lunch. There’s something very Australian about going to the beach and sitting near the water and having Australian ingredients simply presented. Most chefs are typically interested in ingredients as opposed to being oversold something that’s ridiculously manipulated. Just the quality of the ingredients at Sean’s: they really speak for themselves. Visiting chefs really appreciate that relaxed atmosphere and it allows them to be themselves and relax, even if they’re here for an event. That’s when the interesting conversations tend to happen. If you go to a fancy restaurant, you can’t relax. I’d also bring a couple of bottles of Australian wine because Sean’s do BYO which is amazing. But it’s a firm favourite by every means: not just to take visiting chefs, but from a personal perspective, too. It’s somewhere I can happily go and instantly feel comfortable and at home. I just wish it was closer to where I live. After that, I’d probably pop into the Cured and Cultured bar at Bennelong at the Opera House: it’s the perfect backdrop in terms of such an architectural landmark. You can sit there and be quite relaxed. Chef Pete Gilmore’s handling of iconic Australian classics is great for visiting people to see.

If I’m after some comfort eating, I’d go see the guys at Boon Café. It’s easy and literally five minutes away and it’s a one-stop Thai shop you can pick up some vegetables and groceries for the restaurant. I’ll get some crab rice and green juice to balance things out. There’s also Chaco Bar which is now Chaco Ramen which just does ramen which is amazing. Chaco Bar moved into the old Jimmy Liks site in Potts Point. I popped in there recently and sat at the counter which was so interesting for me to watch. I loved seeing another grill chef on a very different slant and grilling in a very different but very personal way. They’re still doing the best yakitori in Sydney.

Banh Xeo Bar is an Asian restaurant in The Cannery in Rosary that’s run by Tania Ho and Benjamin Sinfield, a couple of young St John alumni who are making a real amazing go of it. They used to have a market stall making these amazing pancakes that got so popular that they decided to open a business. Because the chef [Ben] came from that St John background, there’s nothing he likes more than getting in a whole pig, breaking it down and celebrating each part of it on his menu. Things like pig’s head nuggets with roasted bone marrow, lemongrass and chilli and incredible broths: exactly what I want to eat most of the time. They’re such a lovely, humble young couple who are always really pleased to see you. Even though the canteen-style café site works for them, I hope that they find a space that fits the level of the food they’re serving. It’s not on everyone’s radar but it’s a place that deserves a lot more merit. Just talking about it makes me want to get there now.

My Favourite Pub In Sydney

Being British, I like spending time in pubs. There are two good places in Sydney that spring to mind for me. One’s the Lord Nelson which is in The Rocks and is the oldest pub brewery in Sydney. It’s got an amazing beer offering. Over the last year, we’ve collaborated with them to make beers for the restaurant and have just made our third batch. I’ve always wanted to make beer and get involved and not just dial it in and get someone to make it for me. Each time we do a beer, we do something different: the last one was made with Geraldton Wax and desert lime and came out really well. We’ve just made our fourth batch of beer which was a Davidson plum and wattle seed red ale with rye malt.

Great Coffee In The Neighbourhood

Great coffee is something people in Sydney take for granted until you travel and go the airport or out of town. You order a coffee and it’s nothing like a coffee. There’s no joy in that cup at all. It’s great to have Single O Surry Hills in the neighbourhood. I love the whole culture the entire team has created around coffee. Most of them have been there for a hell of a long time because they’re super into promoting coffee across its many forms and facets. It’s not just a white coffee or black coffee, but cold-drip, long-pour or on-tap. It’s mind-blowing to think coffee has so many different styles and profiles. Every time I go in, the guys are raving about this amazing coffee that comes from a particular area and has notes of sherry and chocolate. It’s not false advertising and they’re not reading it off a cheat sheet: they’re super proud and passionate. Maybe the O stands for obsessive?

Come Into My Office

Firedoor is a different kind of grill restaurant that blows away your preconceptions of what a grill restaurant is and what it can be. That was always my hope for it. We have no gas or electricity and we literally cook everything over a wood fire to order. We don’t even have charcoal. We light a fire every single day and time our preparations in harmony with the heat. It’s the craziest form of cooking and is the hardest form to get a consistent result with, but what we consistently find is that everything we produce over fire is delicious. I’m always learning new things about the ageing of meat and different cuts. It’s very new territory and there’s a lot of unanswered questions for me because there’s not people out there who can answer my questions, I just have to find my own way and learn from mistakes. Beef is at the more extreme end of the ageing spectrum but we age all of our meat including pork and lamb. Fireshop is something we run on a fortnightly basis and came about as a way to support our producers during the lockdown and give the public a way to access some of our suppliers. We run dinner boxes on a fortnightly basis and each box is centred around particular ingredients or members of staff and food from their childhood.

Selected Works: Finding Fire: Cooking at its most elemental (2017)