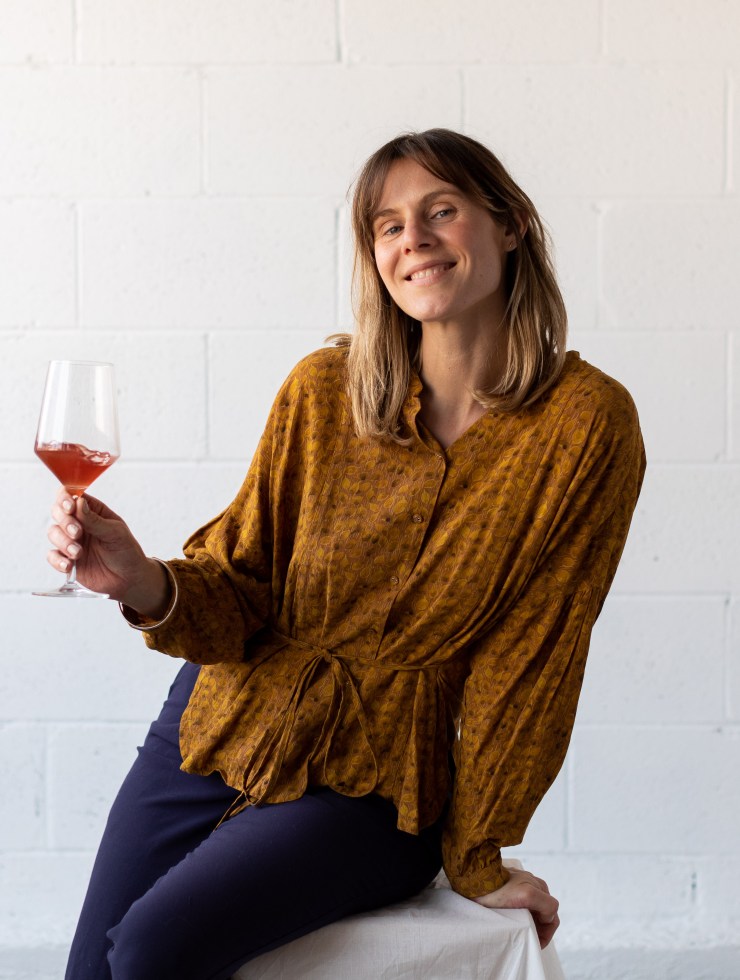 Wine is Rachel Signer’s life. She drinks it. She writes about it. She makes it. Since discovering natural wine in New York, Signer has travelled the world, documenting the stories of vignerons that share her love of organic viticulture and winemaking. (Many of these stories are published in Pipette, the natural wine journal she publishes). Nowadays, home is on a farm in the Adelaide Hills where Signer and her winemaker husband Anton Von Klopper take care of their vines, gardens and – most importantly – daughter Simone.

The Place I Call Home

The Adelaide Hills are to the east of Adelaide. There were vines planted in early colonial times but what we’re talking about in the present day was planted in the 1980s by a couple of families here. I’ve heard a lot of winemakers say that the soil in the Adelaide Hills is quite favourable to making wine without any sulfur additions. It’s a large region with vineyards that are one and a half hours away from each other, so obviously there are different microclimates, but I think the weather is just cool enough at the right time that it preserves acidity so you can make really nice, early harvested wine and not feel the need to add anything to it. The climate allows people to grow Burgundian varieties, so things like gamay, chardonnay and pinot noir tend to thrive. Then you also have people growing varieties like nebbiolo and sangiovese which are generally grown in warmer climates in Italy, but they do really well in this climate.

The Adelaide Hills has become a really eclectic, surprisingly international community. I feel like everyone I meet is so interesting. They’re growing something or they have some kind of incredible hobby or they’re making something which might be a small business. And people are really creative and very multitalented. Like, they manage a farm as well as perform in children’s theatre: that’s the kind of people we know. On an average day, you’re encountering people that do ceramics, or make natural wine, or are veggie and flower growers, or are involved in festivals or are yoga teachers. I think the commonalities are that everyone’s really outdoorsy. People go for hikes and bush walks all the time and spend a lot of time at the beach. Although it’s a 45-minute drive away, we treat it like it’s our backyard. We’re always going on walks there. It’s quiet in winter but the rest of the year is like a party atmosphere. Picture a group of people drinking magnums of natural wine with kids running around and a bonfire burning under the stars: that’s a party in the Hills.

Right now we’re drinking quite a lot of Scintilla wine by James Madden who has a Jura-inspired approach, especially because he works with savagnin and makes wonderful light reds. And we drink a lot of Manon wines which are just really electric and lively. They have a really interesting approach to blending. We’ve also really been into magnums from The Other Right. I know that might sound funny, but for us, it’s really amazing to find a magnum of natural wine which is so stable that you can open and drink it for four days and it doesn’t go bad. We just love that because then we don’t have to think and we just have one bottle open and drink it three nights in a row. But there are so many new producers on the horizon. It seems like lots of people are starting up labels. There are two other winemakers here on our farm and they’re great. There’s Aaron who makes Chateau Comme Ci Comme Ca which gets more and more interesting with each year, and then Jean Bouteille who is a French winemaker who makes The Pirate. It’s neat because there’s four of us making wine here and doing really different things.

There’ll be more hotels in future years but right now, there’s really only one that I know of which is Mount Lofty House. It’s quite expensive, but it’s really nice. It’s in an amazing location right next to the Botanic Gardens. I’ve seen people stay in amazing Airbnbs in Crafers, Sterling, or Upper Sturt. I would definitely recommend staying up here. Going down or up the hill between here and Adelaide totally changes the experience. It doesn’t take that long, but it feels like a big drive.

Just down the road in Piccadilly, we have Ensemble and Brid. Ensemble is a collaboration between a plant stylist, a shoemaker and a clothes maker and they’re all focused on doing things ethically and environmentally. They’ve curated the most incredible collection of things from all over the world that they sell in their shop. It’s just an amazing place. Right next door is Brid, which was opened by Duncan Reid, a friend of ours who is a very serious home baker. His mum has a bakery in New Zealand. Brid has a couple different kinds of bread every day and Duncan is also using some of the spent grain from a friend of ours who is starting a miso and soy sauce brand called Bhreu Ferments. His bread is incredible, plus he has these amazing dark chocolate rye cookies. Stirling has a place called The Organic Market and it’s open 364 days of the year. It’s a little grocery store and is the best place to get organic vegetables around here. It also has a café with very nice coffee, tea and food. And then there’s the Ashton Post Office Café which opened recently and is a country café where you can have cake, coffee and pastries. It’s really good.

More Than A Restaurant

They don’t shout from the rooftops about it, but The Summertown Aristologist is really a project about growing nutritious, organic vegetables and then using them in simple dishes and serving natural wine. Nearly all of it [the vegetables] comes from the patch on our farm that’s currently tended by Lily Graham, who’s doing an amazing job. It’s exciting. It feels like it’s always in flux, always developing, always looking for new things to grow, always looking for new ways to offer food in a sustainable, affordable way. The current chefs Tom Campbell and Ethan Eadie have done such an amazing job over the past year and a half and are really refining their approach. You can order a la carte or you can have the tasting menu. The cellar is full of local and imported natural wines. Not everyone knows this, but if you’re having a meal at the restaurant, you can show up half an hour early and do a complimentary tasting at the cellar door. It’s the cellar door for Lucy Margaux, Chateau Comme Ci Comme Ca, and Commune of Buttons: the three partners in the restaurant. You can also buy wine from Italy, France and other parts of Australia.

The Scenic Hotel was a local hangout where you’d find old chaps having a pint and a kangaroo schnitty [schnitzel]. There’s an amazing view of Adelaide: that’s why it’s called the Scenic and there’s lots of outdoor seating. Jay Marinis, one of the new owners, took over in late 2020. Being a distributor of low-intervention wines, he started introducing those to the menu, so the wine program is pretty exciting. He’s also done a couple of events which were really interesting. One of the things I love about events at The Scenic is that they have incorporated Aboriginal leaders in a way that I’ve never seen around here: not just acknowledgement of country, but talks about the Uluru statement and didgeridoo playing. That’s really special and awesome and I’m looking forward to seeing more of that. He’s revamped the food program a little bit and introduced fresher, veggie-focussed dishes. He also does a tartare with Smith’s chips which is particularly good.

My Favourite Places in Adelaide

We would make a trip down to Adelaide for LOC Bottle Shop. To us it’s just perfect. It’s so cute and unpretentious. And owner Olivia Moore is really great at making anyone feel welcome. She’ll find something to drink even if you’re not familiar with natural wine. She really knows her stuff and is doing a great job of presenting the best of what’s out there. Hey Jupiter is a French brasserie run by a French and Australian couple and has an awesome by-the-bottle wine list. You can get some oysters and have a bottle of wine on their terrace. And then there’s Exchange Coffee which is just down the road and is super good. Other than Exchange, Sibling is the best place to get coffee in Adelaide and has a very nice atmosphere. It’s really cute and it’s a little bit easier to park around there compared to other places. When I have time when I’m in Adelaide, I love being able to stop there and get a flat white a a bite to eat there. You can get amazing breakfast bowls with poached egg and avocado.

My favourite yum cha place is called Ding Hao. We go down there and bring wine and it’s amazing. All the dumplings are incredible, especially the prawn and coriander dumplings. I also like the rice flour rolls and the tripe which is my favourite dish. Anton really likes the chicken feet but I’m not such a fan. You have to come after 1pm for the chicken feet.

A Journal About Natural Wine

I started Pipette [the French word for a wind thief which is the instrument you dip into a barrel when tasting wine in the cellar] because there was really no serious journalism about natural wines and I wanted to change that. I didn’t just want to write my own reports: I also wanted to publish writing by other people. I’ve really learned to love editing, working with writers from around the world is a very special part of publishing a magazine. Another goal was to present the articles with beautiful original photography and artwork, because mainstream publications don’t really do that. They think that photography often is too expensive. I just got tired of seeing the same old things published about natural wine. There’s this whole audience out there that just love natural wine and would appreciate sophisticated journalism. I thought, let’s really profile the people that are influential and let’s talk about the real issues. Let’s talk about sulfur additions. Let’s talk about organic farming. It’s easy to get caught up in natural wine being like cool or having fun labels, but really, it’s about farming.

Signer’s first book and memoir, You Had Me at Pét-Nat, will be released in October 2021. Click here to find out more and to pre-order a copy.