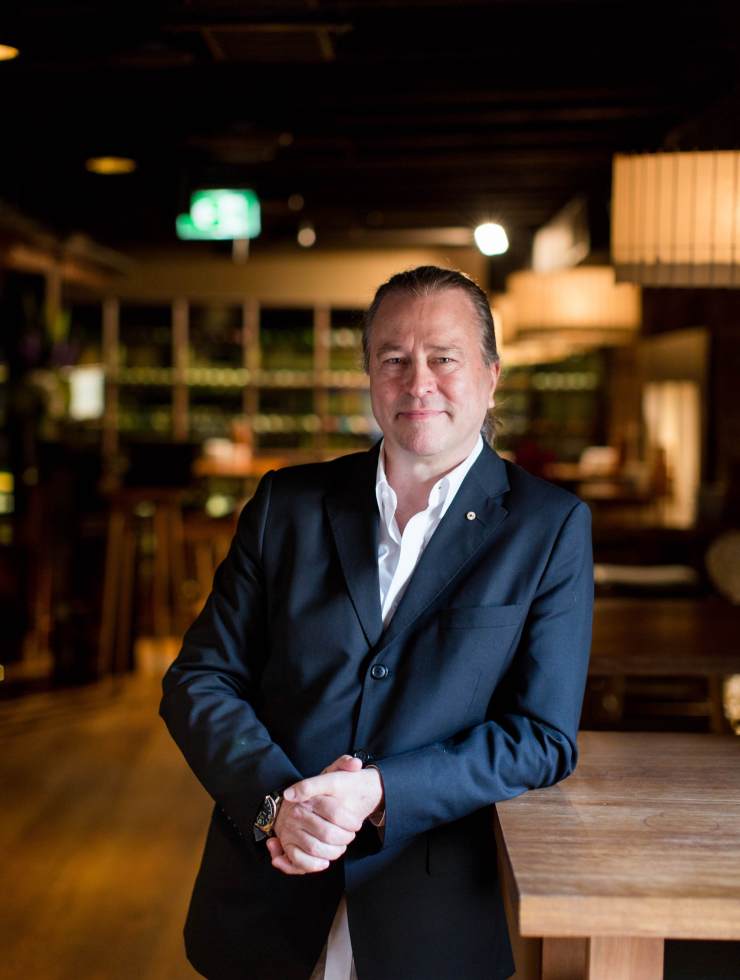 Regional Chinese cooking. Luxe steakhouse dining. Uncompromising Italian. The food on QANTAS. Great burgers: influential Australian chef Neil Perry has overseen many restaurants and cooking styles – it’s testament to his experience that he does all of them so well. His tastes and knowledge of Sydney’s dining scene are equally comprehensive and diverse, whether the occasion calls for big night out celebrations or where to score the best food court noodles.

I love eating around Sydney, and a lot of places I really like tend to be small, hole-in-the-wall Asian restaurants. About half a block down from my office is Malay-Chinese Takeaway Restaurant. With laminated table-tops, the décor is about as fancy as the name, but they do the best laksa you can find in Sydney and, as you probably guessed, take-away, too. I also really love Happy Chef Noodle Restaurant which is in the Sussex food court. It does the best wonton noodles, and has a really delicious menu.

Great Asian Eats In A Flash

Dainty Sichuan is also fantastic. It has a little express place in World Square that does a really beautiful spicy soup with chitterlings and intestines, which I really love. I really like the girls and guys down at Chat Thai restaurant in Gateway. It’s really yummy, lovely Thai food, and it’s half the price of some of the other restaurants around town doing similar food.

And then I really love Chaco Bar, a Japanese place in Darlinghurst which does yakitori at night and serves the best ramen in Sydney during the day. It’s just the bomb – really amazing. I’ve been going to Chaco since it opened about five years ago. I go a lot. My kids and I really love going to for a really great Korean barbecue experience at Danjee Korean BBQ.

Where To Find Great Live Seafood

I really like Ester. The chef there, Mat Lindsay, used to work for me in the 90s. He’s a really nice kid, and his food is awesome. There’s a bit of an Asian influence. It’s really interesting cooking. I definitely put him up there as one of the best cooks. There’s a lot of natural wine on the wine list, so I don’t like that so much. I’m just not convinced that wine faults are that delicious, but you know, if that’s what floats your boat. But the food’s really good. Another young boy that’s doing some good things is Josh Niland at Saint Peter. He’s doing some funky things with fish, things that you would normally do with meat, sort of dry-ageing and such. Personally I don’t think we should dry-age beautiful white-flesh fish, but I get what he’s trying to do. It works really well with oily fish like tuna and mackerel, where you get more density and more intensity of flavours as the cells collapse and sort of start to intensify in flavour. He cooks really beautiful food, and his wife Julie, who does the desserts, used to work for me.  And then along from there, I really like Danielle Alvarez, who’s cooking at Fred’s. She’s a really good kid, and I really like the restaurant. The kitchen cooks with fire like my restaurants do. I really love that sort of style.

There’s some really good modern Italian cooking happening at 10 William Street. Its sister restaurant Fratelli Paradiso in Potts Point is a bit of a favourite of my kids, so we often go down there with the family. It has a natural wine program, but there are a few things you can drink. It always does great pasta, and the kids will have a little Roman-style pizza. We’ll usually share a plate of calamari, too.

Sydney On a Beautiful Day

For a special occasion restaurant or just to enjoy a beautiful Sydney day, I love to sit at the cured and raw bar at Bennelong and order a bunch of stuff and look at the harbour bridge. That’s pretty cool.

Richard Purdue is the chef at Rosetta, my Italian restaurant. If there’s anybody cooking better, real Italian food in Sydney, I’ll hold my breath underwater for 20 minutes. There’s no one even close. They’re absolutely ripping the food. It’s just the best ingredients in Australia, beautifully cooked with great craft, and that fantastic Italian ability to cook seasonal food, leave it alone and have it stand on its own. I really love the pizza coming out of there at the moment – beautiful four-day sourdough pizza. Then also great antipasti, handmade pasta and desserts. It’s a really beautiful restaurant.

Another place I really love is Room Ten in Llankelly Place. I have coffee there every day. There’s only about a metre-and-a-half of bench space, and they’re doing a really good food program out of there, which is just amazing: great sandwiches, great salads, a really beautiful breakfast menu, and they’re always busy. It’s a tiny place but it’s just packed from seven in the morning till four in the afternoon. I quite often dive in during the afternoon for the spicy lamb rack which is amazing, or the beautiful salt-beef toasted sandwich.

The Key To A Good Burger

I just adore Burger Project, and I think the burgers out of that place are just amazing. If you take the best beef in the country – 36-month grass-fed brisket and chuck – and you cut it, grind it and hand-form it into a patty and then just smash it into the grill with Murray river salt, I mean, it’s just impossible to beat that. The wife doesn’t like the one burger I have each week, but then again, I’m strong enough to only have one, which isn’t easy sometimes.

Some Of The World’s Most Exclusive Meat

It’s pretty hard not to sit behind the bar at Rockpool Bar & Grill with some great oysters, a beautiful steak and some amazing wine. Rockpool is probably one of the only restaurants in the world where you can taste incredibly unique beef – all dry-aged and beautifully looked after – cooked over wood. There are steak tastings where you taste beef side-by-side: the nuances in aroma, flavour and texture really stand out. You can see what an amazing piece of Blackmoore Wagyu tastes like next to a Ranger’s Valley 300-day grain-fed Angus, next to a beautiful 36-month grass-fed Angus out of Cape Grim. There’s often Mishima beef – which is the original Japanese cow – and that’s probably the only restaurant in the world serving it. There’s Rhone, a composite breed which David Blackmoore has developed. It’s a secret breed of prized cows out of Europe he swears he’ll reveal to me, one day. It is the most extraordinary beef. Like a 30-month-plus animal with a marbling score of 6. It’s one of the great steaks in the country, and there just aren’t many places in the world that you can eat meat like that.

We have the most spanking, amazing fresh fish with great flavour here in Australia. Compared to the rest of the world, I think we’re a tiny bit more sensitive to the cooking of it, which is great. The first thing I usually want to eat when I get home from travelling is a beautiful piece of charcoal-grilled King George whiting, coral trout or flathead. It’s just perfect.