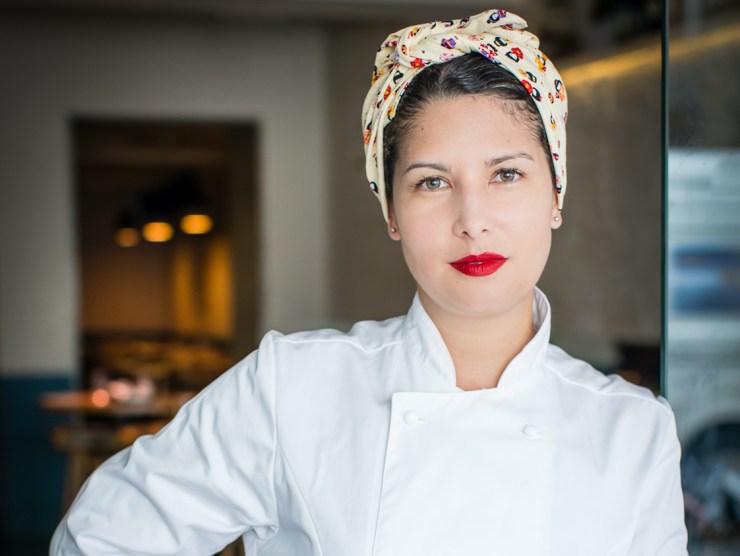 Foraging. Diving for seafood. Making cheese: all part of Analiese Gregory’s rural lifestyle in the Australian island-state of Tasmania. You can now immerse yourself in it thanks to her cookbook “How Wild Things Are: Cooking, Fishing and Hunting at the Bottom of the World” and her SBS show “A Girl’s Guide To Hunting, Fishing and Wild Cooking.” While Gregory’s resume includes high-profile international kitchens such as Mugaritz, (San Sebastian), The Ledbury (London) and Quay (Sydney), it was her honest, produce-led cooking at Hobart restaurant Franklin that announced her arrival on Australia’s dining scene. Franklin, sadly, is no longer with us, but the Tasmanian capital has plenty to interest eaters and drinkers.

I live in the Huon Valley next to the river in between Huonville and Franklin. I’m on the side of a hill. It’s a dirt road and dead end and nobody ever drives past. All the neighbours know each other and most of them are old Tasmanian farmers. I’ve got geese, goats and chickens at the moment. There’s a sourdough bakery called Summer Kitchen Bakery in Ranelagh which is two towns over and within 10 minutes drive which is really cool.

A Pub That Appeals To Everyone

Tom McHugho’s Hobart Hotel has this thing where it kind of appeals to everyone. You can take someone there that just wants to have a pint and a parmy [chicken parmigiana] or a $10 steak, but then you can also take all your natural wine loving friends that want to eat roasted Delicata squash with house-made cheese. It hits so many things at the same time. And they do all the right things. They support all the local producers. They buy seconds of vegetables and eggs and all kinds of things. They put their money where their mouth is. While I was cooking at Franklin, I had been known to have staff meals and breaks there.

The Agrarian Kitchen is like the ultimate farm produce-driven restaurant. They really go above and beyond to find producers in their local area and the Derwent Valley and they grow a lot of the stuff themselves. Everything they grow in the Agrarian Kitchen garden goes down to the eatery and gets preserved. It kind of reminds me of The River Cafe in London, but in restaurant form. They’re preserving and working with the seasons and using the best of local produce. There’s a wood-fired oven and a smoker. You can go down and get house-cured meats with preserved cumquats in the middle of winter. It’s great country cooking. They also have a great team. When I go there with my friends, we go and visit a couple of really good little antique shops in the town, like The Drill Hall Emporium.

The Agrarian Kitchen is also pretty close to the Two Metre Tall Brewery which has a farm bar that you can rock up to five days a week. Go before your lunch at Agrarian if you can or just after. It’s just a little further up the Valley. It’s always either [owners] Ashley or Jane [Huntington] there and you have a chat to them about the beer and get a pint. A lot of their beers like the sour cherry ale are hard to get a hold of but they’ll often have some for sale to take home. I’m not a beer drinker, but I got turned on to their cleansing ale when they were selling it at [Tom] McHugo’s [Hobart Hotel]. They make beer for people that don’t drink beer. They make a lot of sours and things like that. They started growing their own grain and harvesting native grains to make beers. They’re both super curious and just very into cool ideas.

A Restaurant – And Wine Bar – Doing Its Own Thing

I love the walk-in wine room at Dier Makr. Often when people go somewhere with a tricky wine list, they need a lot of help or they don’t know what to do. It’s a nice adult-in-a candy-store kind of thing to walk into a room and be like, “oh my god look, we’ll have this, maybe we want this.” The restaurant also does a kind of vegetable-driven set menu. It’s very much: “This is what we do. Like it or don’t like it. This is what we stand for”. It’s just a really fun place. When they were doing bar snacks, I would just go and sit there and prop up the bar and have a glass of something really nice and get them to cook me something on a Sunday night when I was off from Franklin. Lucinda, Dier Makr’s small wine bar, is a bolt hole you can always slip into. It uses the same produce in Dier Makr but in slightly different ways. They’d make heartier things like bowls of pasta and broth. During the lockdown, Lucinda turned into a wine shop and was like a mini [Melbourne-based specialty liquor store] Blackheart & Sparrows sort of vibe in the middle of Hobart.

Pigeon Whole Bakers feels like part of the lifeblood of Hobart. The shop is so beautiful and there’s so much light. I find that even on those days I say I’m not going to eat gluten, I still wind up going there and getting something. When I was doing heaps of traveling, I would always make sure my drive to the airport would go past Pigeon Whole because they would open really early and the food at Hobart airport is so bad. I’d be eating something like a Pigeon Whole bagel on a JetStar flight and be like, now I’m actually winning at life. I love the ham sliders, largely because they make their own [mustard relish-style] vegetable pickles. They’re small, tiny round brioche buns. You could probably eat two of them, but one is enough to take the edge off.

There’s a newish cafe called Sunbear that opened in an old teddy bear shop on Collins Street. It’s all wooden furniture and really nice chilled vibes. It does batch brew and different roasts and is a really nice place to sit, which can sometimes be a bit lacking In Hobart. I also go to Straight Up Coffee and Food quite a lot. It’s a gluten-free, vegetarian café. It also roasts its own coffee and you can get espresso, v60, Chemex, Aeropress and all these different brewing methods. My go-to is cornbread with haloumi, avocado and scrambled eggs. I was raised as a vegetarian and I’ve taken my mum and my sister there and they both love it.

Sonny is a wine bar that was originally a spin-off of [neighbourhood Hobart restaurant] Templo. Again, it’s quite similar to Lucinda and is a really nice bolthole you can walk into off the street. It has a nice little shopfront and is just a really nice place to take a friend and catch up and have casual snacks and a glass of wine. I went and had a snack that was brioche with aged Gouda and pickled onions and it was really good. Because of the Templo connection, they have that pasta-making knowledge so you always know the pasta is going to be really solid. For people who are new to Hobart, it’s a nice place to go. It’s one of those cosy little places with high-quality food and beverages that make them go, “oh we didn’t know it’d be like this down here.”

In the short history of Tasmanian wine, Dirk Meure is kind of a legend. The first time I met him, I came down to eat at [influential Hobart natural wine restaurant] Garagistes when I was still working at Quay. My partner at the time Richard was a sommelier and had organised to see this local winemaker who was doing really interesting European things. So we drove down and turned up to see Dirk and Luke Burgess [chef at Garagistes] there in his gumboots making vinegar. Like [natural wine importers] Roger and Sue, Dirk is another one of the people that has supported and pushed the industry and gone to the restaurants of young people that wanted to move to Tasmania to cook. His nephew Rory was managing other people’s vineyards for them and making wine for other people. He’s just started making wine for himself in earnest. He doesn’t just buy grapes, he actually manages the vineyard and does the farming which is to be commended. He has a d’Entrecasteaux pinot noir and an east coast riesling coming out.

Hobart’s hospo community is tight. During the Covid lockdown around Australia, chefs in other cities came out saying that we needed a cull of restaurants and that there were too many, but that’s not the way I and other chefs in Hobart feel about it at all. We’re all really sad that places are closing and not reopening. Hobart is punching above its weight food-wise for the size that it is. Everyone working in restaurants is aware that the more of us there are and the more things there are to do, the more people will come down here, the better tourism will be and the busier we’ll all be.