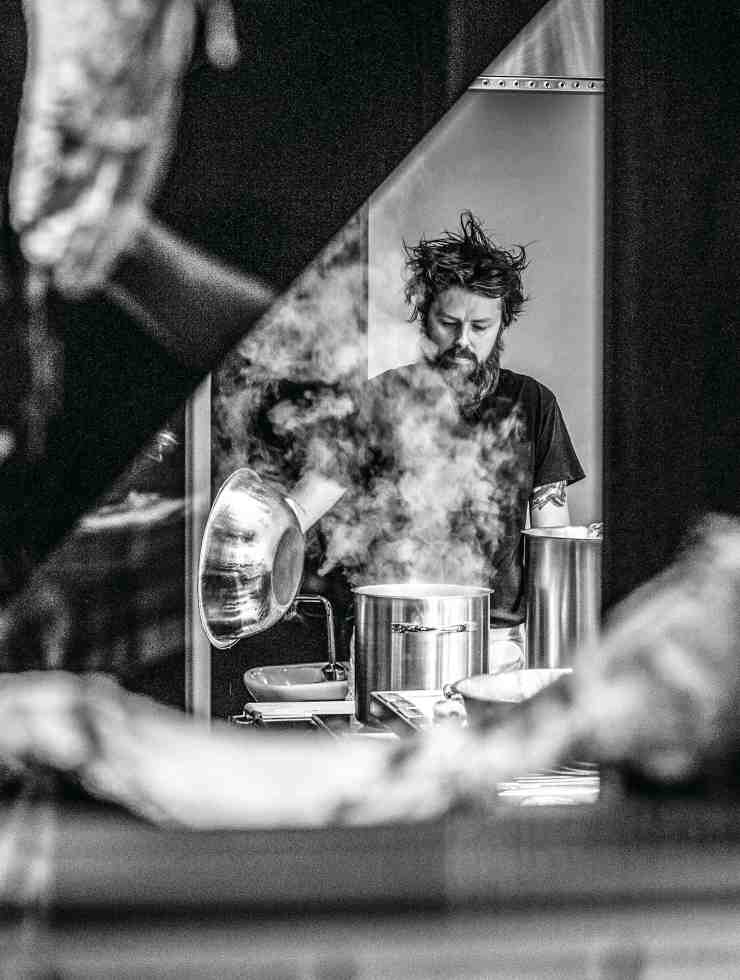 Once upon a time, Geelong had two major claims to fame. The Geelong Cats football team, and being home of Ford Australia. Following the 2016 opening of Igni – a small, wood-fire tasting menu restaurant – the Victorian city forced its way onto the radars of eaters around the world. In the kitchen: Aaron Turner, a straight-shooting cook that counts Noma and El Celler de Can Roca as former ports-of-call. He’s travelled and cooked around the world, but now calls Geelong home, not least because he’s also opened a taqueria and “fried chicken dive bar” in the city. There’s not a better person to give you the lowdown on – as the locals call it – Geetroit.

Geelong’s Past, Present And Future

I didn’t grow up in Geelong but I ended up here. I love living in Geelong. I’ve lived here on and off for 10 years and used it as a home base for travelling and working in restaurants. It’s been a nice home base. You’re next to one of the best coastlines in Australia for fishing, surfing and hanging out on the beach, and attached to that really cool coastline is rainforest, The Otways, so you really have the best of all the worlds, just a lot more chill. Geelong was once a manufacturing worker’s city. That mentality is still there which I quite like, but as we know manufacturing is on the out, so the city is adapting. More people from Melbourne are moving down to work in the health, education and government sectors and moving their young families down this way which is changing the vibe of the place in terms of a vibrant community of people. I guess there’s a little more expendable cash to spend which has forced a whole lot of new restaurants to open in the area, pre-COVID-19. The city is changing. The food comes first, and then culture, and the rest changes around it. It’s in a good spot.

The other good thing about Geelong is that you’ve got access to a lot of cool producers doing a lot of things. For what we do at Igni and – prior to that – Loam, that’s the most important thing that you need. I’ve spent the last 12 years building up relationships with these producers. In Port Campbell, we’ve got Great Ocean Ducks that are some of the best ducks in the world. Then around there there’s also Ravens Creek Farm, a really great pork producer, with a little crowdfunded vegetable farm called Kinsfolk Farm next to them. Kinsfolk sell at a lot of the coastal farmers’ markets. Throughout the years, producers have started to build up a really good community together and it’s nice to be a part of it in terms of support and exposure for them. Working with these producers directly lets you develop products that might otherwise get flushed down the sink. Things like the goat’s whey which I use for fermenting and then the farmer then gets to make some money off. And you’re only a phone call away from all these guys. The other good thing about this area is the honey. There are really good expressions of the area through honey. We’re pretty lucky to be able to get that. There’s a farmers’ market right in the middle of the city every Sunday at the South Geelong Primary School which has started to get more traction and foot traffic which is really good. Every time I walk past it or go there, there are more producers doing their thing.

A couple of great microbreweries like Bells Beach Brewing have popped up, plus producers like Bellarine Distillery that’s producing a gin called Teddy & The Fox. It’s across the road from the Drysdale Cheese, the goat’s cheese farm that I use, and they’re feeding the goat the spent grains and what-not. Charlie Swan of CS Wine Co is doing some really cool wine and Anthony Brain at Livewire Wines does a lot of hands-off, minimal intervention stuff. They’re both doing some of the more interesting stuff around the area. We’ve done a few projects with them including making wines for the chicken shop and learning from them. No one’s so big that you can’t ring them up and say, “hey I’ve got an idea, are you interested in giving it a whirl?” Geelong’s cool like that. It’s also a great knowledge base, especially if you’ve got fermentation questions. It’s nice to be able to pick up the phone and give ‘em a buzz.

Sam’s Café Geelong is a Geelong institution. It’s only open for lunch and is owned by a Lebanese family who have been there forever. They do shish tawook and shawarmas that are 10 bucks and they’re the best. I get the lamb shawarma with chilli and this sesame garlic paste. There’s some tabbouleh-ish stuff in there, too. It’s really simple, it’s really quick and it’s always perfectly seasoned. It’s so good. They do have a longer menu with those 80s Australian café classics like a bacon sandwich and a ham and cheese toasty, but the main focus is on the falafel, lamb shawarma and chicken shish tawook. It’s hard to go past the shawarma. The seasoning is on point: a balance of lemon, garlic, salt and chilli. As a cook, that consistency is what you should be aspiring to at all times.

Where Locals Buy Their Banh Mi

There’s another placed called V N Rolls which is a Vietnamese cafe out near the cemetery that does banh mi. It has these massive slabs of pork shoulder that are perfectly roasted plus these big sheets of crackling. The salad is always super fresh and there’s always a line. It sell hundreds of banh mi each day and it bakes its own bread. It’s really cool and it’s really retro and it’s like six bucks for the banh mi. You can’t go past it.

I go to a cafe called Kilgour Street Grocer quite a bit. It’s more like a reinvented corner grocer. I go there for the coffee and the whole vibe. It sells really good bacon and eggs to have there and to take home as well. It also roasts its own coffee. It’s run by a young family doing their thing and they’re doing it well. There’s also Cartel Coffee which is more of a brew bar that just does coffee.

There’s a cool little wine bar and wine store called Union Street Wine that’s run by two young guys that love wine. It’s a really small bar that probably seats about 15 people with an ever-changing list of wines by the glass. You can buy everything by the bottle and takeaway. They also do little plates of cured meat and salty fish which I love. Next door they’ve got a wine store which is always stocked with a really cool range of wines and beers. They also do a wine subscription club which is really cool. They’re doing well and about to open another store in West Geelong near Hamlyn Heights.

The Barwon Club Hotel is an old rock and roll live music bar that has been there forever. It has really cool bands coming through. It just ticks all the boxes. The bar staff there all know my name. There’s Guinness and Melbourne [Bitter] on tap. And it’s just around the corner from my house. Plus they do a really nice pub meal for what it is. You want a schnitzel? No problem. I really like it.

Culturally, Pivotonian Cinema is an important part of the city. It’s an arthouse cinema that plays a lot of movies that you wouldn’t necessarily expect to see down here. There’s a big group of people in Geelong that are really into everything that isn’t Marvel. When I first moved back here, they set their cinema up inside the Ukrainian town hall and away they went. Then it grew and grew and set up a crowdfunding campaign and moved into this building next to a bottle shop and across the road from a gas station. It’s tiny but it’s awesome. It has those big comfy chairs and good local booze like Lethbridge Wines.

My Fried Chicken Side Hustle

The Hot Chicken Project is a hot chicken dive bar, really. Fried chicken and booze. It’s my idea of the perfect restaurant. Doing hot chicken, it was important for me to take what I thought Nashville hot chicken was – which was a real community based restaurant, not a big chain of mass produced chicken – and make sure that it was a restaurant and bar that was ingrained in the community. I think we’ve achieved that. We have a lot of regulars, it’s very consistent and it’s a place that you can come and use however you like. If you just want a drink and snack, we’ve got that. If you want a full plate of chicken, we’ve got that as well.

Tacos y Liquor is my homage to the tacos truck of LA and the neighbourhood taco shops of Mexico. It’s really tiny. We have just four tacos and some sides plus a small tostada menu. We’re just trying to keep it in that street vein and not what’s been popularised in Australia which is ritzy and fancy. It’s basically a little bar with a little kitchenette. It’s got that same ethos as the chicken shop and is here to use how you want. I want to make people happy whether that’s a margarita at the bar or four tacos.

Geelong is pretty spread out. You’ll need a car if you want to get down the coast. There are buses that do go around and connect to the coast, but I’m more of an at my own pace, my own time, my own space kind of guy. When we first started Igni, people would come down and then leave. Then we stated seeing people stay overnight, then for the weekend and then the long weekend. The more things that are happening, the more I’ve noticed people stick around. A weekend’s a good amount of time: a little bit more if you can. That means you can head right down the coast to the Great Ocean Road and explore around there.