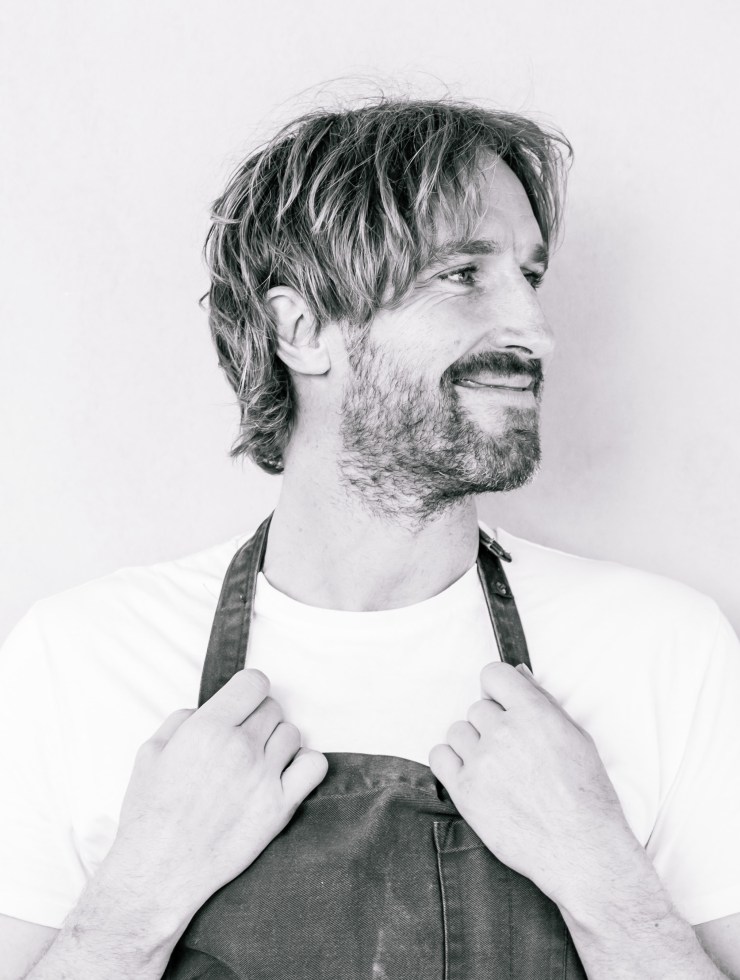 Byron Bay, an Australian beachside paradise near the Queensland-New South Wales border, seems to agree with Darren Robertson. After eight years at legendary Sydney fine-diner Tetsuya’s (including three years as the restaurant’s head chef), Robertson decided it was time to shift gears and get back to basics. In 2011, he and some likeminded friends threw open the doors to Three Blue Ducks, a thoughtful, ethical restaurant perfectly pitched for the Sydney seaside suburb of Bronte it opened. Three Blue Ducks has since taken flight around the country and now boasts an outpost in Robertson’s new home city, Byron Bay. Here’s where else the surf-loving chef thinks you should eat and drink when you’re in town.

A 20-minute drive from Byron Bay is a small coastal town called Brunswick, and it’s here that you’ll find Fleet, my favourite, and arguably the best restaurant in the area. There’s something about this place that’s quite magical. Chef Josh Lewis and his wife Astrid McCormack are lovely hosts, to the point that you almost feel like you’re in their home. The service is amazing, and their knowledge, particularly Astrid’s wine knowledge, is unbelievable. She’s certainly one of the best in the business. The food is delicious, and with the whole mecca of amazing producers available, Josh is obviously sourcing super local ingredients. My favourite dish would have to be the sweetbread schnitzel sandwich. It’s not a dish you would expect in an elegant, fine-dining restaurant, but I absolutely love it. It’s so tasty. Whenever I go, I’m always tasting a new wine or a different approach to a food combination. I always leave feeling like I learned something.

Where The Drinking Is As Good As The Eating

Josh and Astrid also have a Mexican restaurant, La Casita, just down the road from Fleet. It’s awesome, and luckily for me, just around the corner from where I live. They took it over last year, installed a proper kitchen and a wood fire grill, and are creating simple food with lots of flavour. Things like tacos, ceviche and lovely guac, just done really well.  It’s a great little space too with a beautiful courtyard. It’s a nice place to go for a few tacos and a beer. Lightyears is a great spot for Vietnamese food and good cocktails or beer. Roby, the chef down there, is such a good bloke.  A good natural wine bar in Byron was long overdue. Supernatural Wine Cellars was opened by Peter Windrim, a winemaker from the Hunter Valley, and Andrew Love, our former restaurant manager at the Three Blue Ducks. They have around 50 natural wines and do lovely small plates and delicious snacks. It’s a really cool little space. It’s awesome.

When I’m in town I spend a lot of time at Locura (Spanish for madness), a restaurant that we opened in October of 2018. The menu is kind of a mix of Mexican and Peruvian cuisine, with things like tacos and tostadas, ceviche and oysters. I normally take the kids down there on sunset for an early dinner. It’s also a great little spot for a cocktail and a quick snack.

I really like Federal Doma Café, which is in the hinterlands right by Byron Bay. It’s a really beautiful drive out there, and a lovely place to go for breakfast or lunch, or even just a good coffee. It’s always really busy with locals. There’s a little courtyard with wooden tables and they often have live music. It’s owned and run by two Japanese chefs, and they’re cooking café food but in a Japanese style. They do a fantastic breakfast, like a bacon and egg sandwich or breakfast sushi rolls – which kind of sound terrible but are actually fantastic.

There’s a really good farmers’ market scene all around Byron Bay, but my favourite is New Brighton Markets. It’s close to us, really small, really quaint and really chilled. It’s definitely a market for the locals. Even when it’s raining, the die-hards will go and know exactly what they’re getting. If I had one recommendation: go there on a Tuesday and find a stall called Nomadic Kitchen. The chef’s name is Rob, and he worked at River Café in London back in the day. He just cooks really simple Italian food. He’ll usually do a bruschetta, maybe an omelette with peppers or shaved zucchini. His sister does the desserts, and his entire family is super legit. Like they make their own salamis, grappa, vinegars. It’s amazing. The family love it, and if industry people were coming into town, it’s probably the first place I’d take them.

A Different View Of Byron

There are some great restaurants around, but moreover we have some fantastic producers too. Typically, we’ll grab a few things, like cheese and salami with beer or wine, and go and sit on top of a hill somewhere. It’s a really nice thing to do around this area. There are lots of little amazing spots that you can pull in to see spectacular views, like the contours of the valley. The whole horizon. It’s an incredible place to be. We also get a lot of thunderstorms here in Byron, and it’s a spectacular show when they roll in. It’s a little bit daggy, but there’s a great view at Ocean Shores Golf Club. It’s up on top of a hill, and so you have these great, huge panoramic views of the coastline from the veranda there. It’s a great spot to sit with a bottle of wine or a few beers and watch the crazy storms.

If I’m in town for breakfast I really like Bayleaf Café. It’s quite iconic. It’s been around for years, and has a menu that rarely changes, but it’s really good. Folk is also quite a good brekky option. It’s super Byron, a quintessential Byron spot. You know, avo toast, and all that jazz.

Stone & Wood opened a beautiful microbrewery, and it’s become a quintessential Byron spot. You know, you can show up wearing thongs (flip-flops). I really like going down there. It’s definitely an industry crowd, with tourists and locals alike. They usually have around six or seven beers on tap to try, and the food is from Chef Sarah Swan, an awesome chef who used to work for Neil Perry.

Where To Find Byron’s Best Produce

Restaurants are great, but being able to see and taste produce in its raw state, to see it at its source, that’s the holy grail. The Farm is great because it’s a really nice way of experiencing the local food. You know, you can have lunch at Three Blue Ducks, and then pick up some incredible locally grown and made products to take home. Things like sourdough from young-gun bakers Bread Social, or tasty little rissoles from Byron-based producer, Brooklet Spring Chicken (which we also grow on The Farm). Some people come here, and they just want to have a sausage roll and walk around the farm. They’ll come with the kids and go and look at the animals. It’s just a really nice vibe.

Most of the places we go are on the outskirts of Byron, where you find the really great spots that aren’t as well known.

Breakfast On The Road

There’s a beautiful little spot in Bangalow (a 20minute drive from Byron) called Woods. They have an outdoor kitchen garden where you can sit and have breakfast or coffee, which is really nice.

I like going to a place in Mullumbimby [a 20-minute drive from Byron] called Izakaya Yu. It’s a Japanese place, and it’s always packed. They do a great ramen night on Monday. Also down in Mullumbimby is a restaurant called Rock & Roll that does really good Thai food. It’s not super-swanky, but it’s super tasty stuff.

A Kitchen Garden And House-Smoked Meats

There’s a really cool place out in Clunes [a 20-minute drive from Byron] by Jared Dixon, founder and winemaker of Jilly Wines. His family own the Clunes Store, a small-cellar-slash-café that also sell great produce. It’s another really cute spot with a little kitchen garden. It’s a really nice place to stop in for a decent breakfast or coffee if you’re driving around the hinterland. If you want to go even deeper, go to Clunes Meat Market. It’s pretty epic, and they smoke all their own meats.