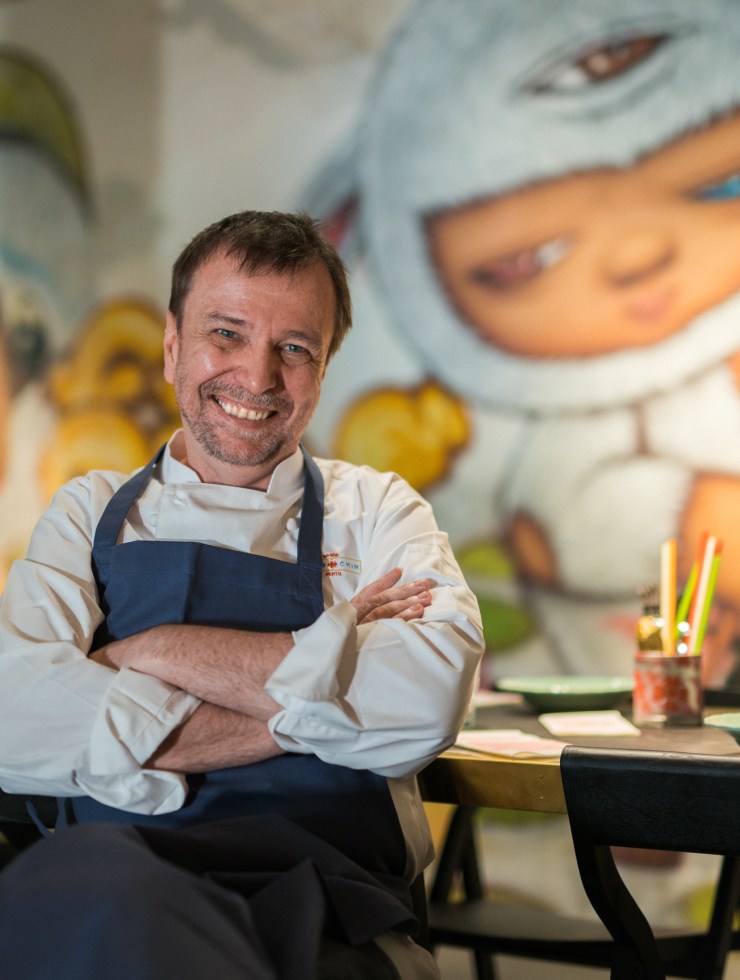 “I first went to Thailand by mistake, but it was a mistake I have never regretted.” So began David Thompson’s life-long love affair with Thai food. Since that fateful (unplanned) visit to Bangkok, Thompson has opened restaurants across Australia, Asia and London; written definitive Thai cookbooks; and been recognised with Michelin stars and World’s 50 Best plaudits. When he’s not travelling, these are the places he likes to eat in the Thai capital.

Why I Love Eating On The Streets

I’m a restaurateur that doesn’t like restaurants. I get a little bored with the folderol of cooks pronouncing what they’re doing. It’s over-conceptualised to the point that it’s indigestible. I’m not suggesting there are people in Thailand like that: it’s a pretty current trend around the world. I hate food that’s smarter than me and has a deeper character than me. I find it improper for me to nibble at and certainly to swallow. So, therefore, it is with the greatest of pleasure that I eat on the streets which is where I belong and where I’ll end up.

All Thai street food is Chinese. The Chinese influence is profound and fundamental when it comes to Thai street food because the Thais themselves were farmers and lived in the countryside. Bangkok, until the early 20th Century, was a city of two aspects: ceremony and commerce. The people that drove the commerce weren’t the Thais, but the Chinese. The Thais, being farmers, ate at home with the occasional snacks at the market, but in the main, the Chinese had the greater tradition of eating out or were coolies that couldn’t go home and ate on the streets. If you walk through Chinatown, there are remnants of those places coolies ate at. I love that about Thailand: there are still faint echoes of what places were like 100 years ago.

“The Best Oyster Place In The Universe”

Nai Mong Hoi Thod (Mr Mong’s Oyster Omelette Place) makes the best oyster omelette in Bangkok, which is, therefore, the best oyster omelette in the world and therefore, without fear of contradiction, the best oyster omelette place in the universe. There might be other items on the menu, but I can’t go past the oyster omelette. The owner’s grandfather developed the recipe 50 to 60 years ago and it’s cooked over charcoal. It’s crunchy, delicious and not really an omelette, but a batter of tapioca and rice flour water that they fry off and add oysters and an egg to. It is arresting. Every time I go I’m never disappointed. I must confess that when the grandmother cooked it, it was gob-smacking but the version cooked by the grandchildren isn’t bad. They follow an old recipe and add handfuls of oyster and it’s done with a generosity and faithfulness I can only admire. To me, that’s the epitome of street food.

The Joy Of Late-Night Eating

Two doors down, there’s a place called Rang Khao Tom Pleng Nahm. It’s a late-night place that has smoked duck, Chinese vegetables braised for hours, deep-fried salted fish and, when they’re in season, stir-fried lily stalks. All lovely stuff. It’s one of those places that does stuff without distracting from what is, I believe, the most important thing: food cooked well that tastes good. They’re not creating a story, they’re not trying to reminiscence, they’re not trying to do an homage, they’re just trying to cook. It’s just one of those places you end up in eventually at the end of the night. It’s a little farther away from Chinatown: I often find the restaurants that are off the main street are better than the ones on the main street because they’re not flush with tourists.

Isaan Food Worth Travelling For

In Sukhumvit there’s Baan E-san Muangyos Isaan, an unapologetically Isaan (northeastern Thai) restaurant. The duck and fish larp (meat salad) are both delicious. I normally don’t eat up around there because I don’t live around there and you tend to live and eat where you work. I was surprised there were so many Japanese diners there until you realise that so many worked in Issan where the factories are. The north-east is industrialising quite rapidly so there’s a lot of Japanese factories up there. Soi 31 is also the area where a lot of Japanese live.

I go to Krua Apsorn near the national library quite often for its tiger prawn curry with lotus stalks. It’s a Bangkok version of a yellow curry and it’s sour and tart instead of overly spicy and is just delicious. It’s made several hours before it’s served and the flavours have had time to meld together. There’s also some stir-fried pork with oyster sauce and garlic. I know it sounds ordinary but when you eat something that’s been cooked well, it transforms from something prosaic and all too familiar into something good. The cooks there have that knack. There’s also a stir-fried crab with curry powder which I love. These are all cliched, Bangkok dishes but they’re all delicious.

“The Riper, The Sloppier, The Better”

Or Tor Kor is the market I like the most. It’s run by the department of agriculture, so there are some great stalls which are where the affluent Thais like to go shopping on the weekends. It’s not really the food that I like, but the fruit. There’s an entire aisle of Thai fruit that’s just outstanding. If you want an idea of how good Thailand is, go there and eat the fruit. Thai fruits are the best fruits in the world. They’re picked when they’re ripe and down at the market in 12 hours and glistening with sugar, begging to be eaten. When you’re eating them, you’re transported to paradise. Or to Bangkok’s Or Tor Kor.

People often ask me about my death row meal. Somewhere in that mix would be a durian. Ripe, odoriferous, sinister-looking and untouched with human hands other than being opened. My favourite variety is kanyao – the long stem durian. The riper, the sloppier, the sweeter, the more sumptuous, the better. Many Thais look at me in disgust and often for very good reason but not when it comes to eating durian. When you smell durian for the first time, you look at your shoes and wonder what you’ve stepped in. It’s a fruit that inspires passion, either you love it or you hate it. Durian season is April to May, the hot season which is the best season for fruit. There’s durian. There’s langsat. There’s watermelon rich with flavour. Lychees start at the end of May.

One of the contradictions with Bangkok, at least with cooking Thai food, is that Thais take it in different directions as they stroll through fusion. They have a far more global outlook to their cooking. The irony is that the westerners who are cooking Thai food are far more conservative because they’re too afraid to stroll. You look at what I’ve done in the past and it’s judicious and faithful, whereas people like chef Chalee Kader at 100 Mahaseth, chef Fae Rungthiwa at Front Room or perhaps the chefs [Sujira Pongmorn and Arisara Chongphanitkul] at Saawaan are far more adventurous. I know where I stand and I can’t help but stand where I do. But it does make Bangkok an extraordinarily rich variety of eating food. In particular, Thai food, whether it’s from the most conservative, most street-ish, the most unpromising of stalls that are trying to have some faithfulness to the past, to those restaurants that are abandoning the past because they’re so confident in the Thai food they cook. Chalee’s not as radical as say 80/20 or the kookier stuff that I enjoy, but his stuff is okay. It’s northeastern stuff. I usually go there with rapscallions and I start off with drinks which is unwise and then we move onto some solid food, the larp (northern Thai meat salad) is quite good, the gaeng kee lek (curry with cassia leaves) is delicious, rich and full of fermented fish.

Taking A Break From Thai Food

Thais like the prestige of French food but they enjoy Italian food more. It’s  all about the ingredients. Literally 50 metres from me is a pizza place called Il Bolognese. Even if I’m incapacitated and feeling unwell, I can just strike speed dial and have some of the best pizza in Bangkok home-delivered. The Roman-inspired Italian restaurant Appia is quite fine, too. I like the zucchini salad. The roast pork is delicious and the pasta always gets me. And the trippa alla romana (Roman-style tripe): yes please. Give me stuff like that and I’m a happy, happy man.