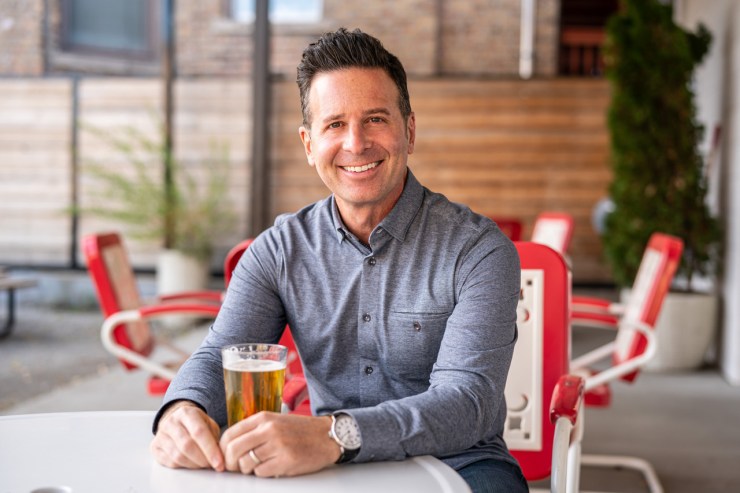 Steve Dolinsky is a 13-time James Beard Award-winning food reporter, who spent 17 years as “The Hungry Hound” for ABC 7 News, moving to NBC 5 in 2021, where “The Food Guy” reports air weekly. Not content with just eating and drinking all over the Windy City, he’s taken a deep-dive into the city’s fascinating pizza world, writing two books on the subject, launching a bi-monthly podcast and starting a weekly tour business. In 2022, he’s launching the first-ever “Pizza City Fest” bringing together 40 of the city’s best pies.

Chicago-Style Pizza is More Than Deep-Dish

There are at least 10 different Chicago-style pizzas. Chicago is definitely a pizza town, but most people only think of the stuffed and deep-dish styles. But it’s really all about what we call tavern-style pizza. This is the party cut, the square cut, the thin and crispy style of pizza that people are surprised to learn was actually the first and original Chicago-style pizza. It’s been our style since the 1930s before deep-pan pizza was created in 1943 and long before the stuffed pizza craze started in 1974.

My Pizza Topping of Choice

While the most popular pizza topping in America is pepperoni, in Chicago it’s all about sausage. Not the coin-cut sausage that you find on pizza over in the east coast, but Italian-style sausage meat with lots of fennel and garlic that’s added to pizza using what we call the pinch-and-press method: pinch off a piece of the raw sausage mixture and press it onto the pizza. This allows the fat from the meat to render into the pie, which gives you all of that great flavour.

My Top Spots for a Great Slice (Listed by Style)

Artisan-style pizza
Three-day ferment of a dough that has an all-natural starter that’s been fed for more than 20 years. Lots of hydration in the dough results in an airy, light interior crumb but a burnished, tan crust the colour of a Coach bag.
Favourite: Robert’s Pizza & Dough Co. in Streeterville, downtown.

Deep dish pizza
Made in an anodised steel pan about two-inches-high. Dough is pressed down in the centre, topped with cheese, ingredients and then sauce before being finished with pecorino Romano.
Favourite: Labriola in Magnificent Mile/Michigan Ave.

Stuffed pizza
Same architecture as deep: bottom crust, cheese, but then a thinner layer of dough and a lake of tomato sauce on top.
Favourite: Suparossa in Portage Park.

Sicilian-style pizza
A stunning five-day ferment results in a slice that looks like a brick but eats like a feather. Doesn’t hurt having a two-star Michelin chef behind the recipe, who reached out to major-domo John Arena at Metro in Las Vegas for advice.
Favourite: Pizza Friendly Pizza in Ukrainian Village.

Roman-style pizza
Al taglio or “by the cut” is focaccia-esque and crispy, with a wide range of toppings. Cut with scissors, then weighed and reheated to order.
Favourite: Bonci in Fulton Market.

Detroit-style pizza
Owner Derek Tung began with just wood-fired pies at this outpost of the NYC original, but he’s added a Detroit style that rivals anything from the Motor City. The crust and crumb here are textbook and the U.S. Pizza Cup – with its fresh ricotta, bacon jam, basil and hot honey – is a stunning creation.
Favourite: Paulie Gee’s Logan Square.

I take anyone visiting Chicago to Lula Café, which is probably my favourite restaurant. It’s very creative, very local, an outstanding restaurant. A husband-and-wife team started it about 20 years ago, and it’s just kept getting better and better over time. They sort of look up to Alice Waters, that’s kind of what their mantra is. They work with a lot of farms, and every Monday they do a three-course dinner based on whatever produce they picked up over the weekend. Everyone goes crazy for their pasta ya-ya which is a bucatini with cinnamon and brown butter.

Around the corner from Lula Café is another one of my favourite spots, Cellar Door Provisions: a little neighbourhood corner café. I never get excited about quiche, but here, it’s really something else. All of the bakery goods are amazing. The bread has the most beautiful crumb, and the laminated doughs are really good. The last time I was there I had a chicken and rice dish that was kind of like a congee. It was so simple, but every element was executed just perfectly. It was one of the most perfect dishes I’ve had in Chicago in a long time.

I really like Mexican restaurant Dos Urban Cantina. Brian Enyart and Jennifer Jones Enyart, the husband-and-wife team behind it, both worked for Rick Bayless – the Godfather of Mexican food in America – for many years.

A Honky-Tonk All About Tacos and Tequila

Another chef who worked for Rick, Paul Khan, is behind some of the best restaurants in Chicago: Avec, The Publican and Big Star. Big Star is a kind of honky-tonk that’s all about tacos and tequila. Avec do Mediterranean share plates with a great wine program. It’s famous for its bacon-wrapped Medjool dates stuffed with chorizo that come with a beautiful homemade tomato sauce. I really like Publican which does kind-of Midwestern share plates. There’s a lot of delicious pork and seafood dishes.

As Serious as Dough Can Get

Chicago has seen a ridiculous amount of average Italian restaurants open over the past year, but the smart ones will have set up accounts with Publican Quality Bread. The bakery is part of the One Off Hospitality group, owners of The Publican and Publican Quality Meats. It is the brainchild of Greg Wade, a James Beard Award-winning baker and now author of the new book “Bread Head”. Wade deals in long fermentation and high hydration doughs, creating loaves with enviable open crumb structure. The bakery moved to much larger digs in 2022, with some seating outside on the compact patio. The loaves here have crisp, hardened crusts with soft, pliable interiors and lots of open crumb structure. The rhythm of the bakery is what sets it apart. At 7am, they’re selling pastries. At 9am, it’s fresh bread out of the oven. At 10am, they start putting up savoury items like tartines and The Big Sandwich. Big is an understatement. You tell them how much to cut and you pay by the ounce. On the day I visited, bread was schmeared with oregano mayo, layered with pickled green tomato, roasted summer squash, smoked turkey and chipotle kumquat sauce, with some Cotija cheese (aged Mexican cheese) and arugula. Lighter appetites should come later in the day, around 1pm, when they start doing jambon beurre sandwiches – ham, butter and cheese on a minutes-old baguette.

Maplewood Tavern is a great microbrewery that also produces some spirits. Billy Sunday is a really nice and cosy little place. It’s kind of a throwback that specialises in amaro cocktails and its food program is really impressive.

There is an amazing sandwich that was created in Chicago by Puerto Ricans. It doesn’t actually exist in Puerto Rico, but it uses ingredients from Puerto Rico. It’s called the jibarito. Essentially, it’s a sandwich with steak, cheese and onion, but instead of bread, it’s made using plantains. The plantains are fried, then smashed thin, then fried again so they become like paddles which act as the bread. You can easily find a jibarito in Humble Park, which is predominantly a Puerto Rican neighbourhood. There’s a restaurant there called Borinquen which does a great version. The Italian beef sandwich was created here in the 1920s by Italian immigrants. It has very thinly shaved, paper-thin, roast beef, usually either sweet or hot peppers, and you get it either dry or wet: that’s when you dunk the sides of the sandwich in beef jus which is infused with all of this delicious beefy goodness. The best one I’ve tasted is at Johnnie’s Beef in Elmwood Park. That’s my favourite beef sandwich by far. I’ve taken lots of TV crews and visiting food writers here when they visit, but you can find an Italian beef [sandwich] pretty much anywhere in Chicago.

“The staff is hard at work well before the sun rises at Mindy’s Bakery, mixing dough, cutting it, pressing it into molds and tempering tons of chocolate. This is Mindy Segal’s domain and with decades under her belt as a pastry chef, she’s going back to her roots with her namesake bakery in Bucktown, but she’s also whipping up some impressive new creations. The line never ceases to let up on the weekends. They come for raspberry crumble bars and narrow brownies, bagels and rugelach. Segal is just as interested in savoury treats. The “brisket fat pastry” houses – not surprisingly – brisket. The other contains a humble knob of pork belly, plus their macaroni and cheese sauce with corn, and then tiny knobs of roasted pork belly kissed with Parmesan cheese. Segal is also a big fan of combining laminated pastry and Michigan fruit. She’ll use nectarines that have been soaking for days in a blueberry liquid that she used when blueberries were in season. A swoosh of lemon cream adds tartness and a graham cracker streusel provides a crumbly base. There’s also challah, laminated with brown butter, in order to make a hot fudge babka. But her most popular item is a cinnamon roll made with the scraps from her delicate croissants.”

What You’ll Find in Every Chicagoan’s Fridge

If you live in Chicago, you definitely have a jar of giardiniera in your fridge. It’s an Italian, Chicago-style condiment of pickled chilies with carrots, cauliflower and olives. It goes on pizza, it goes on sandwiches, or just about anything where you want a nice crunchy and acidic kick. It really cuts through the richness of a lot of heavy, hearty dishes that we have here.

Selected Works: Pizza City, USA: 101 Reasons Why Chicago Is America’s Greatest Pizza Town (2018) and The Ultimate Chicago Pizza Guide: A History of Squares and Slices in the Windy City