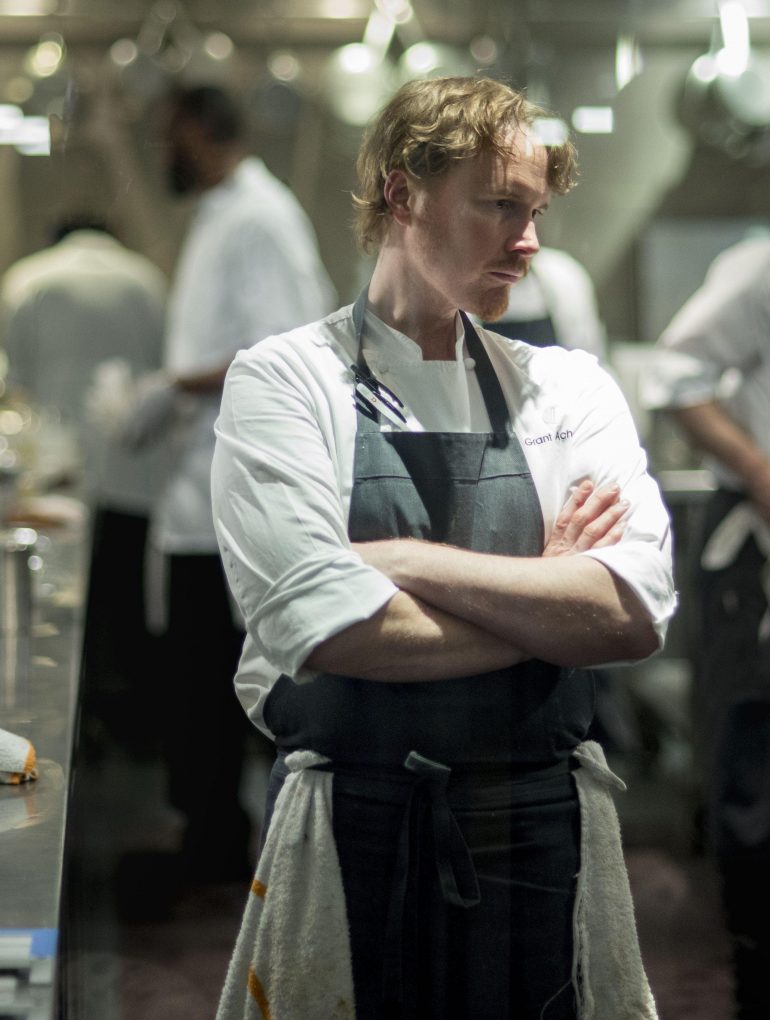 After getting a taste for hospitality at his family’s Michigan diner, Chef’s Table star Grant Achatz and his Chicago three-Michelin-starred restaurant Alinea have gone on to conquer the world of food. Honoured by Time magazine as one of the 100 Most Influential People in the World and named by the James Beard Foundation as best chef in the United States, Achatz is celebrated internationally for his innovative and modernist style of cooking, but still harbours a soft spot for – among other things – a good old “dirty burger”.

I love to go to The Loyalist for a dirty burg. Chef John Shields was on the opening team of Alinea in 2005. He’s moved around a bit since, but has thankfully landed back in Chicago to open two restaurants which are both awesome and incredibly different from each other. The more casual of the two – The Loyalist – which is like an American fare bistro, is downstairs from Smyth: his fine diner serving Nordic-influenced cooking. I think it’s fair to say that everybody feels that John has created the best burger in Chicago. He approached it the same way you would a fine dining dish. It’s ingredient driven and he takes special care using great culinary technique. It’s not fancy. There are no luxury ingredients. It’s just a really, really good burger. It definitely has a cult following. The Loyalist has become that iconic place where industry people will go after service to get a beer and a burger.

Dumplings Made By Chinese Grandmothers

Qing Xiang Yuan Dumplings has by far the best dumplings in Chicago. You have to kind of work for it because it’s quite a drive to get there. It’s super no-frills and there’s no ambiance at all. You’re not going there for the service. You’re not going there for the décor. You’re going there for one thing: to gorge on dumplings. Specifically, you want to get the lamb and coriander dumplings: they’re phenomenal. And it’s a super cool place. You’ll walk by the kitchen and see five or six old Chinese grandmothers back there rolling, shaping and cranking out all of these dumplings. It’s just the cutest thing ever. I mean, you couldn’t even make it up. You feel like you’re in a movie. This is another chef-driven, cult-following spot. Everybody in the industry goes to eat here. It’s cool. It just feels real.

Pizza From An Ex-Fine Dining Chef

Before Zach Smith opened Pizzeria Bebu he was working in high-level, fine-dining restaurants. But then one day, he said to himself, “You know what, I just want to make pizza.” And he’s clearly passionate about it. His culinary knowledge is very chef-driven, so he approaches it in that regard. It’s another place where you’ll find a lot of industry folk. I like my pizza soft with a nice chew. I don’t like it too thin. I don’t like deep dish. Smith’s pizza just strikes that really good balance for me. Everything he puts on top of the pie – the cheese, the burrata – it’s all sourced responsibly from local farmers. He’s utilising a lot of the same purveyors that we do at Alinea. His pizzas are heavily based on seasonality and ingredient availability, so you never really know what you’re going to walk into. And that’s part of the fun. He’s also got a great wine list.

In The Mood For Pho

As with most cities, Chicago has very distinct neighbourhoods that each focus on a particular region of gastronomy. And up on Argyle street, on the North side of the city, there’s a lot of Vietnamese. Whenever I’m in the mood for pho, we head there and go to Tank Noodle. It’s a no-nonsense kind of place. You go in and you literally order by the number. I think number 95 is the one I normally get: duck and vermicelli with bamboo. It’s just so fresh. It has a great flavourful broth. The bowls are enormous, and they come out rippin’ hot. It’s just awesome.

The Fine Diner In Chicago Everyone Overlooks

Boka is literally the restaurant next to Alinea. We share a wall that separates the properties. Chef Lee Wolen was at Eleven Madison Park for a long time, so as a technician he really understands the fundamentals of high-end cookery: seasoning, balance and technique. He nails it. His food is unpretentious, highly seasonal and very ingredient driven. There’s no pyrotechnics like we have here at Alinea. No crazy floating balloons. It’s just a great tasting, honest and well-executed tasting menu. It’s harmonious. It’s approachable. It’s not expensive. You don’t need to make your reservation three months in advance. I’m basically making fun of myself right now. But seriously, you’ve gotta go. When people visit Chicago, they want to tick off Alinea, Smyth and Oriole – which are basically the three top fine-dining restaurants in the city – but they always overlook Boka.

Where Locals Line Up For Doughnuts

I often go to Doughnut Vault in the morning to pick up a few dozen doughnuts for our staff. You know, if we’ve had a really good week, or sometimes if we’ve had a really hard week pulling super long days, and need a little pick-me-up. They’re just solid, really well-made doughnuts. The place itself is really cute as well. It’s not big – just a couple of tables – and some cool, brown-leather chairs. It’s become a staple for the area, and people line up out the door to get their favourite doughnut and a good coffee.

Calumet Fisheries is an old-school Chicago staple out on the south side – so not exactly easy to get to – but their smoked fish is legendary. It doesn’t look like much from the outside, but it’s become a gastronomic destination. They smoke everything in huge stainless-steel smokers – they don’t use any artificial nonsense – and they’ve been doing it for decades. I think they opened in the early 70s, maybe even earlier. They cater our staff Christmas party every year. They put together an awesome display of smoked seafood: shrimp, black cod, salmon, eel, sturgeon, herring. We have around 400 employees now, and everyone brings a guest, so it usually hits around six, maybe seven-hundred people. We typically get an 80s cover band in. Everybody gets on the dance floor, eats smoked fish and dances to music that they’re embarrassed to say they listened to when they were in high school. It’s amazing fun.

For a really long time, Rick Baylas ruled the Mexican food scene here in Chicago. But then came along Mi Tocaya Antojeria – and wow – it’s just awesome. It’s chef-driven, ingredient-focused cooking. It kind of reminds me of Cosme in New York. Chef Diana Dávila is young, energised and just cranking out some really smart and delicious food. I love the smoked beer-can chicken tacos.

“He Really Should Have Three Stars”

At Smyth, you need to surrender yourself to the purity and creativity of chef John Shields. In a lot of ways, it is very Noma-esq. The menu is hyper-seasonal, minimalist, and really, really creative but with restraint. Taking a cue from Nordic-style cookery, John does a lot of fermentation. A lot of cellaring of root vegetables – and smartly – I should add. The food is very clean and very pure. There’s not a tremendous amount of manipulation to the ingredients, but the flavours sing. He really should have 3-stars. It’s a beautiful dining room, but it’s not luxurious in the traditional sense. It’s very sleek, very natural. There’s a lack of pretence. It feels really casual.

Cocktails Made With The Rarest Spirits

Drink anything and everything Paul McGee puts in front of you at The Milk Room. It’s one of those really special places. Its focus is on rare, vintage spirits. They have stuff that you can’t find anywhere else in the world. They take their spirit collection very, very seriously. Everything they have is super dusty: picked up at auction or through private collector groups. It’s obviously not cheap, but it’s just so cool. You’re not going there and throwing down a bunch of drinks – you’re sitting with one for a while, you’re appreciating it – and Paul’s telling you the story of where they got the bottle. There’s a pretty high level of romance to it all, especially after you’ve had a cocktail or two.

The Best Tiki Bar In Chicago

Three Dots And A Dash is the best tiki bar in Chicago. They utilise really high-end spirits to make really creative, well-made tiki drinks. My favourite cocktail is the Painkiller, which is a classic, but they do it really, really well. And they do fun stuff like a treasure chest with dry ice, where they’ll dump a bottle of Dom [Perignon] or Krug in there to finish the punch. If you’ve got a group of six to eight people, it’s just a really great, cool environment.