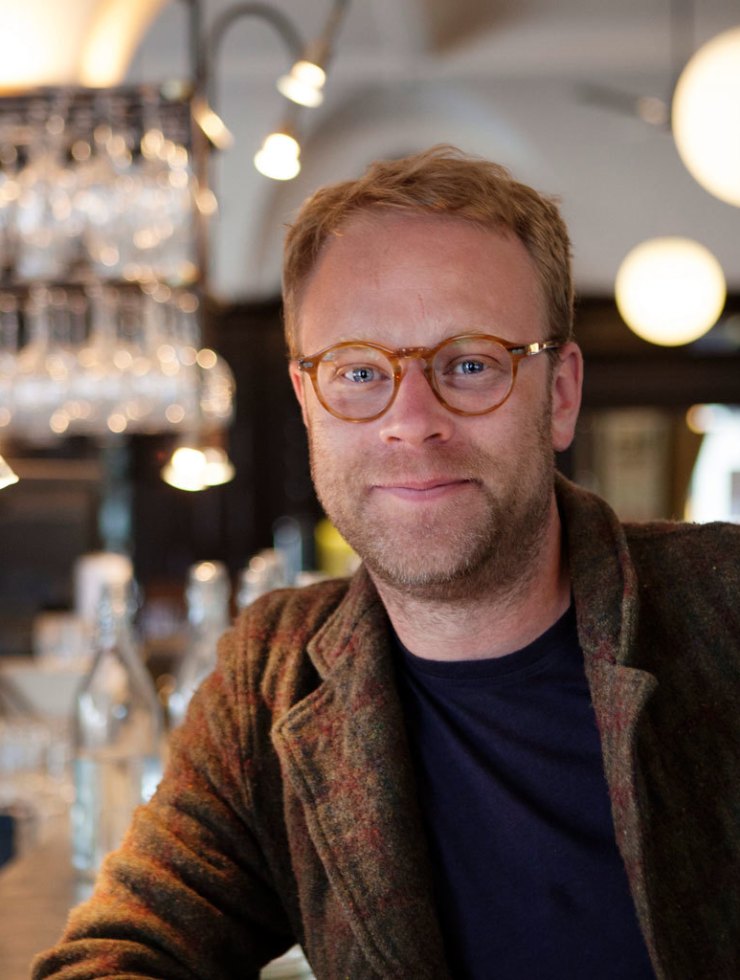 Where can you go in Paris and enjoy three-Michelin-star cooking with a no-Michelin-star price-tag? Mattias Kroon knows. A Swedish-born food critic but based in the French capital, Kroon is perhaps best known for co-authoring the Faviken cookbook. Having said that, he’s just been named the recipient of the prestigious Les Grandes Tables du Monde foreign gastronomy journalist award, so it’s safe to say you’ll be hearing his name a lot more.

A No-Menu Restaurant From An Open-Minded Chef

Just down the street from where I live is Table. It’s an amazing restaurant, and it just keeps getting better and better; I often wonder why it’s not more well-known. The chef, Bruno Verjus, is a great character; he’s a great bon vivant as it’s called here in France. He is actually a former blogger who used to write about products and ingredients, which he is extremely passionate about – the quality of ingredients he uses is simply exceptional. It’s a very polarising place. I think guests sometimes get confused because there’s no menu. It depends on what products he has that very day, and no two plates will be exactly the same. You have to kind of tell him, “Just cook what you want, and we will eat it.”  You can taste the passion, you can taste the energy when you’re there. Technically he’s very sharp, but it’s not the type of food that is supposed to impress you with technique; it’s there for flavour. His cooking is very much like him; free, open-minded and delicate. The restaurant has a great atmosphere. It’s a place where people get to know each other – there are no random walk-ins, or people who come because they’ve seen it on television. It’s a place where people go because it has been recommended to them. It’s very much a word-of-mouth restaurant. It’s a very unique place. I’m there quite a lot, I’m really in love with it.

The Essence of Paris

I live close to a big food market called Marche d’Aligre, and after I’ve done my shopping there, I stop by Le Baron Rouge to drink wine and eat oysters. It’s been there for probably more than 100 years, serving the neighbourhood and the locals. It has so much feeling, and so much attitude, so much food culture. And it’s super cheap. It’s extremely unpretentious and lovely – you could start talking to anybody in there and it wouldn’t be strange. It’s a little bit messy; you stand on the street by a wine barrel, and you eat oysters with your hands. People bring their own bottles to fill up with wine and take home. If you want to know the essence of Paris and food markets, I think it’s essential. It’s one place to see the slightly unfashionable side of Paris, and it’s wonderful. If you go, try their rabbit pâté; it’s fantastic.

Three-Star Cooking At A No-Star Bistro

At La Table d’Aki (the table of chef Akihiro Horikoshi) you get three-Michelin-star cooking at a no-Michelin-star bistro, and for a fraction of the price. Akihiro is a very, very old Japanese man who has a one-man restaurant; he does it all by himself. He used to be the fish chef at the most expensive, and in my opinion, the most incredible restaurant in Paris; L’Ambroisie. He’s cooking French food, but with the precision of a Japanese chef, obviously. It’s extremely elegant, extremely refined, extremely high precision cooking. The place is tiny, so you’re basically sitting next to him as he’s cooking extraordinary classic French fish and vegetable dishes. It’s a very special place because really, it’s a place that could not exist anywhere else; for me it’s kind of emblematic of Paris. And it’s a hidden place – I don’t think they even have a website. I don’t think any person in their right mind would walk past, peer in and say, “Oh let’s go to this restaurant tonight, this looks nice.” It’s just an empty window with a tiny menu and a curtain drawn, and that’s it – but it’s always full, mostly with regulars who have his personal phone number.

The Capital’s Next Three-Star?

Le Clarence has kind of been the darling of the food critic world for the last year or so. It’s fantastic, it’s really, really good. It’s a super luxury restaurant in an old building full of antiques in hyper-classical surrounds, and although it’s brand new, it looks like it’s been there for 250 years. It’s owned by the Prince of Luxembourg, who is also the owner of Château Haut-Brion. The chef has isolated one very small aspect from the whole map of French gastronomy stretching back a couple of hundred years as his speciality; T’almer or practically speaking, ‘Surf and Turf’. He has chosen that as his subject to study and expand in a way; and he’s doing it extremely well, with a lot of precision and creativity. It’s not done as steak and lobster, it’s done in very delicate ways. It could be a small jus made from mussels or cockles with calf’s sweetbreads, for example. It’s very simplistic, very spontaneous food. I think most people in the gastronomic circles of Paris would argue that this is likely to be the next three Michelin-starred restaurant in Paris. I think it would be the one that people would clap the most for, and rightly so; he’s definitely worth it.

A Place To Celebrate

Where is best for a grand celebration in Paris? Chez L’Ami Jean because it’s a very hedonistic restaurant. It’s gastronomic hedonism. It’s a crazy place, and chef-patron Stephane Jego (from the Basque region) is a totally crazy guy – he’s absolutely mad. He’s going to serve you 400g of pâté to start and then something like a huge pigeon; cooked perfectly, crispy skin and straight from the pan. It’s food so hot that it basically burns your mouth – in a good way. Like a huge frying pan sizzling of fresh abalone and live mussels in olive oil and parsley – it’s amazing. They’re huge portions, and it’s way too much food. It’s so unsustainable, it’s kind of the opposite of all these trends of vegetables and refined light little things. I probably go once per year – to remember what it’s all really about, you know. It’s just wonderful for celebrations.

“I Could Possibly Eat There Every Week Without Getting Bored.”

A lot of people know about Le Baratin; it’s not a secret. I think even Anthony Bourdain filmed here at some point. But still, it’s very much a regulars’ place. Most people get ignored in that restaurant, if they’ve never been there before; which sounds awful, and really snobbish and super arrogant, but it’s why it still exists. It’s the whole reason why it still exists. It’s very original cooking from chef, Raquel Carena (who’s originally from Argentina) and I’d say she’s probably 60 now. And she’s been cooking in that tiny, tiny kitchen for over 25 years; I suppose she still smokes cigarettes in there.  And she cooks wonderful, super sharp food that at the surface seems like classic cooking – but it’s not, it’s very personal and unique to her. The food is very unusual and very clever, but in a very rustic way. A lot of people who really know and understand food go to Le Baratin. It’s not a place you go because it’s chic, or fancy or beautiful; it’s quite the opposite. It looks like any other tired little bistro down the street – but it’s not tired – it’s very much awake. I just love being there. I could possibly eat there every week without getting bored – ever. Try the calf’s brain (cervelle de veau) which is cooked in butter with lemongrass, chives and potatoes. It’s always been on the menu, it’s a classic.

The Wonders Of Vegetables

If I could choose a restaurant to eat at every day, I would choose L’Arpège. I’ve been at least 20 times. I’m crazy about it. It’s so light, it’s so fresh, and I love all of the nuances of vegetables, and he (chef Alain Passard) is just a magical persona as well. I love Alain very much. The trick here is that everything is so unbelievably fresh; they don’t prepare things. There’s no kind of formalised structure in the sense that they have 25 stagiers standing in the back with tweezers. Instead it’s just super fresh cooking from Alain – they slice the things right before they put them on the plate – it’s really alive. The food is really alive

My Last Meal In Paris