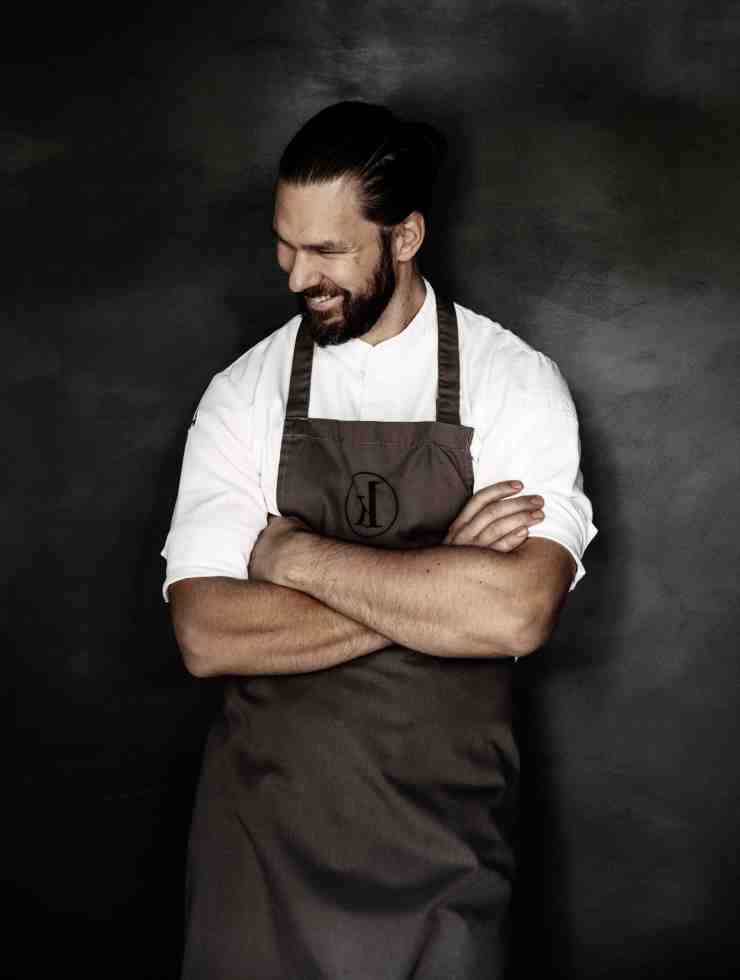 A sustainable Nordic-influenced ramen shop. Fine dining in a former sex shop. And a wine bar where well-behaved customers are allowed to take their glass and chair and sit outside in the summer. Welcome to the new Oslo, as seen through the eyes of Mikael Svensson, the Swedish chef who’s bringing together chefs from across the globe through his pop-up dinner series ‘Mikael & Friends’, and behind Oslo’s modern Scandinavian restaurant, Kontrast.

Where You’ll Find Me On A Sunny Afternoon

In the summer I like to sit at a bar called Bass. They don’t really have an outside terrace at all, it’s just that in summer – if you’re nice – you’re allowed to take your chair and sit on the pavement outside. It’s a cool, relaxing, and easy-going place. It’s not far from my home, so I usually walk there with my girlfriend, and we’ll have some nice cocktails or wine, and something to nibble on. The food is good and simple; cheese, charcuterie, and they do small plates, with maybe only three or four ingredients per dish.

The Cult Of Katla

Katla is a really great restaurant from Alti Mar Yngvason, a chef from Iceland. His old restaurant had this kind of cult-status in Oslo. It was a super small basement place where they played loud hip-hop music and served delicious food on cheap plastic children’s plates and cooked with no rules. Everybody loved it, especially people in the industry. He closed that restaurant, and opened Katla. It’s bigger with a nicer room, but he succeeded in keeping the same kind of vibe with the food and loud music – and it’s still open late.

A Parisian Bistro For Those In-The-Know

Le Benjamin, a French brasserie, is one place that I’ve been going back to throughout the years. It’s the type of place where you always bump into friends or people that you know, especially on Sundays, when a lot of chefs and industry people head there. They change the menu pretty frequently, probably every month or so. They have French classics like tartare, tarte flamée, and you know, trout en croute, but they’re also cooking dishes that are not so common anymore like intestines, liver, shanks, sweetbreads, things like that.

Hrimnir Ramen is a new ramen shop that’s using a Nordic approach, and local ingredients as much as possible. There’s similarities and connections in the flavour profile of North Asian and Nordic cuisines; the sweet and the sour, the preservation and umami building. So obviously what they’re doing is very personal, but it also makes sense. They’re being very sustainable where they can too, like making their own soy by re-using old coffee beans.

To drink cocktails, I like to go to a place called Bettola. It’s a small, quirky place with good cocktails and good service. They’re building the classics well, and they add their own twists.

A friend of mine, Jo Bøe Klakegg opened a really cool restaurant, Hot Shop with his girlfriend Siri Haslund (who runs the floor) in November last year (2018). The premises they found was an old sex shop, or porn shop, a shop where they sell sex toys – but it was empty, and I guess it was cheap. They renovated it themselves and decided to just keep the name of the shop as it was: Hot Shop. They’re doing their thing and doing it really well. To me, this is the perfect example of how you don’t have to be a super, big, fancy restaurant – you can find a space and let your knowledge and expertise in food and wine talk for itself.

Just behind Kontrast is Nedre Foss Gård, a really beautiful, big old house that has a restaurant and three big outdoor bars that are really nice to visit in summer. There’s a cool cocktail bar in the basement and on the top floor, a beer bar where they serve their own brew (there’s a brewery in the house, too). It actually only recently reopened after the whole building burnt down around three years ago. They had to completely rebuild it. But it’s really beautiful now, and it’s cool that you can move throughout the building and have different experiences in each area. I’m really lucky that it’s only 100 meters from my restaurant.