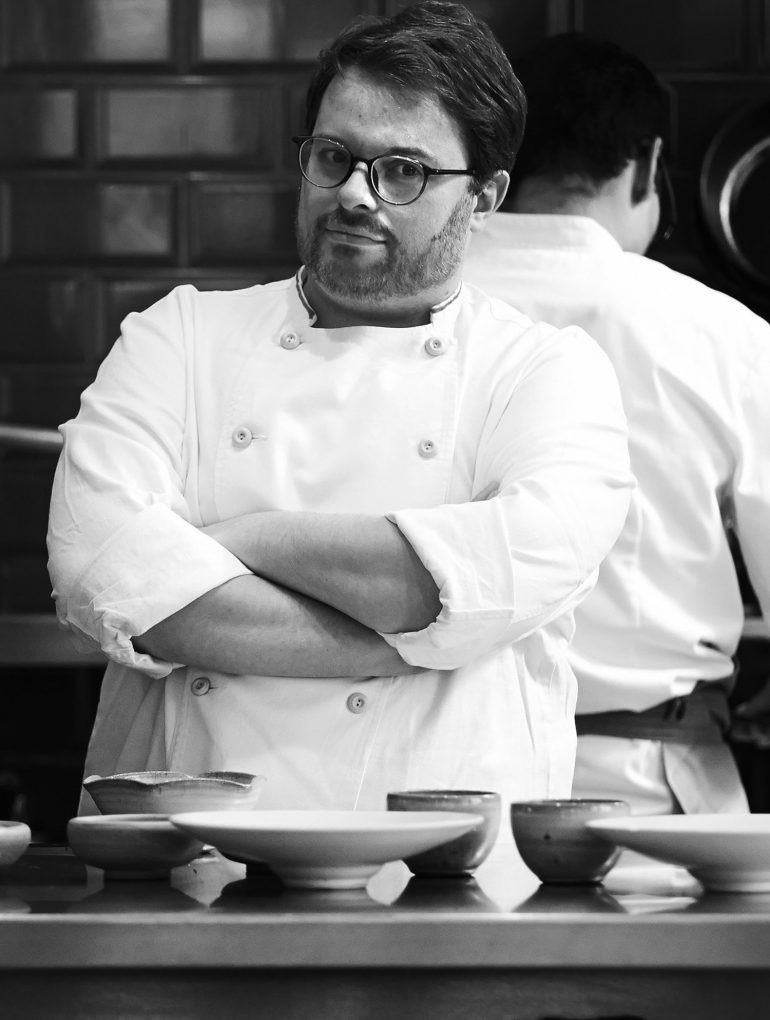 Restaurant, bar, barely-controlled house party: The Clove Club in London is all this and more. In the kitchen, Scottish-born Isaac McHale draws on a diverse set of experiences (his CV includes everything from stints at Noma and The Ledbury to time as a fishmonger) to reimagine British cuisine for a new dining public. When he’s off-duty, his tastes are just as eclectic and run from real-deal roti to Turkish bites that are “so weird, so punk but always so freaking good.”

I dream about Roti King. It’s the best place to get roti canai in London. The flaky, buttery and crisp flatbreads with small bowls of mutton curry and sambal are up there with my favourite things to eat in the city. I started cooking Malaysian and Thai food in the 80s as a nine-year-old in Glasgow, Scotland. I’ve never been to either country, but this place always reminds me of the time that I began teaching myself about the foods of the world; watching cookery programmes, reading books and buying ingredients like kecap manis, galangal and fresh turmeric to cook with and learn about. Put up with the odd location, small queues and sometimes random seating order; it’s worth it.

Best chefs you’ve never heard of? Stevie Williams at 40 Maltby Street is right up there at the top of this list. We were both part of the opening team at The Ledbury 15 years ago; Stevie cooking meat and fish, me in pastry. He went on to open the Harwood Arms for Brett (Graham), writing a menu that seamlessly mixed British country house cooking, Elizabeth David, Arabella Boxer, wild game – something like British gastropub food with a sprinkling of magic. He is a cook’s cook. The kind of chef who makes a naan bread dough without scales to make fresh naan for a family meal in the middle of an 18-hour shift. Stevie you are the best. 40 Maltby street is miles away from anywhere useful, but it is close to Tower Bridge (The bridge American people think is “London Bridge”) and the opening hours are unusual, but the food is simple, and spot on, every time. Everything on the menu is brilliant, from Oeufs en gelee to cheese and wild garlic fritters. It’s a casual blend of British and French country cooking, with a funky wine list to go with it (sometimes a little too funky for me, but hey).

Barrafina has been doing it right since forever, and it’s where me and my mum always go to catch up.  It’s on the wrong side of town for me but The River Café is one of the best dining rooms in London. Some places just have “it” – The River Café always has and always will have IT. 93 years old Soho restaurant Quo Vadis: so charming, so comforting, a little bit special and a little bit naughty. Revolutionary Karl Marx lived in the same building years before, and Marco Pierre White briefly owned it together with Artist Damien Hirst.  The Hart Brothers who own it today are gracious hosts and the menu illustrations by the inimitable John Broadley always make me smile. I actually asked John to illustrate our wedding invitations because we love his stuff so much. Chef Jeremy Lee’s British food is that of seasonality, honesty and deliciousness. It’s a moment of quiet and pause in the daily bustle of Soho.

Black Axe Mangal is so weird, so punk but always so freaking good. It’s a place that could only exist in London by genius, St John Alumni and Danny Bowien friend, Lee Tiernan. Think tiny former takeaway kebab shop with KISS band transfers on a black pizza oven that is used for cooking offal, flatbreads and small Turkish-inspired bites. We head to Umut 2000 in Dalston (close to The Clove Club) for fantastic Turkish food from some of the best chefs to have worked at legendary Turkish restaurant, Mangal Ocakbasi.

Where I Go With Friends

When I get the time to enjoy good food and a few drinks with friends, I make a beeline for the new outdoor terrace at our second restaurant Luca in Clerkenwell. Classic Italian cocktails and a 14th Century courtyard aren’t easy to come by in London! You won’t be disappointed. Not so small or unsuspecting, but my mate James Lowe’s place Lyle’s is the go-to for pared-back, sensible, delicious British cooking. Also keep an eye out for his new spot Flor Bakery at Spa Terminus.