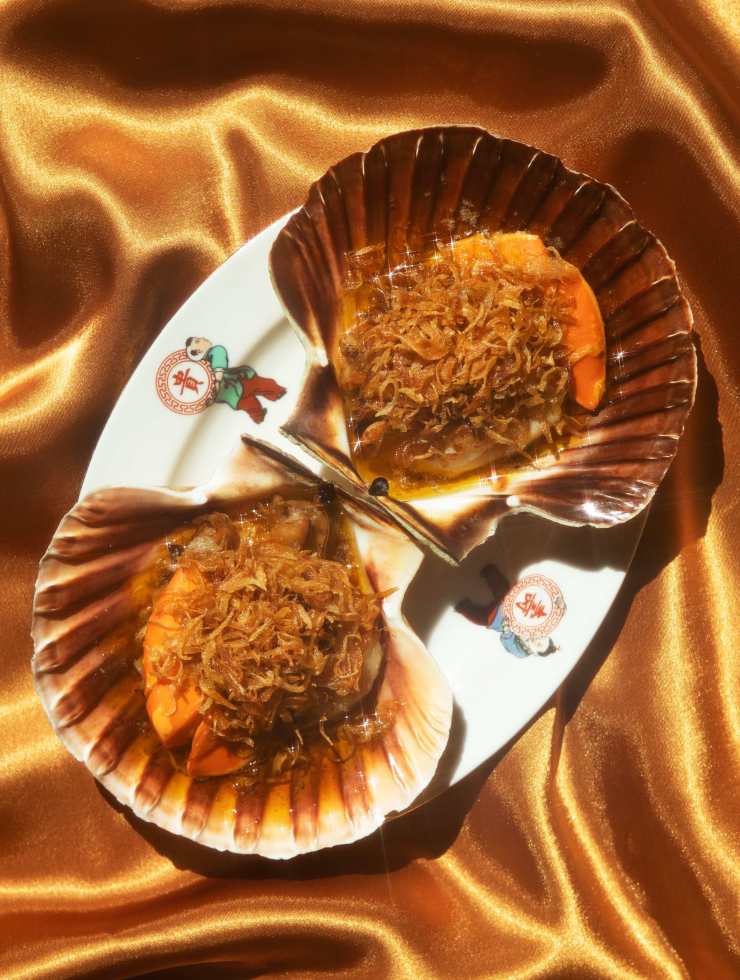 In this new content series, we take a closer look at key dishes from your favourite restaurants around the world.

Waste not, want not: this resourceful (and delicious) dish is a strong argument for further adventures in Scandinavian-Chinese cookery.

She wants people to know that Asian food can be considered, but accessible. That Asian restaurants can be contemporary, thoughtfully designed spaces that are free of tired tropes. That Asian cooks can (and should) be using top-shelf, organic ingredients. In terms of a spirit dish that embodies Lov’s thinking, it’s hard to go past Tigermom’s Norwegian scallop: quickly pan-seared, sliced, then finished on a Japanese konro grill where it’s warmed through in its shell with a sauce made by whipping together butter and a house-made XO sauce.

While the scallop might be the star of the dish – not surprising considering each scallop is hand-dived by Scotsman Roddie Sloan, supplier to restaurants such as Noma and St John – the accompany XO butter is an equally important part of the story and speaks loudly to Lov’s Chinese-Cambodian heritage as well as her commitment to provenance.

“XO sauce isn’t something I grew up with,” says Lov who was raised in New Zealand. “When my family went out for dinner, we would always go to Chinese restaurants where I’d see it on menus. That’s how I got to know it.”

A complex, savoury condiment made with dried seafood, Chinese ham and chilli, XO sauce first appeared in high-end Chinese restaurants in Hong Kong during the 80s and has been steadily making its way around the world since. In Lov’s case, it was visiting Canadian chef and friend David Gunawan that laid the foundation or Tigermom’s house-made XO butter: he showed her the basics of making XO sauce. Lov made it her own by putting local ingredients front and centre, starting with the dehydrated scallop roe and skirt. (Dried squid, prawns and mussels are among the other seafood scraps that have made their way into the sauce). Rather than seek out Chinese or even European hams, team Tigermom source charcuterie and sausage off-cuts from Baest, Christian Puglisi’s buzzy pizzeria with a strong DIY ethos.

While Tigermom’s XO sauce isn’t 100 per cent local – Cognac, for example, is one of the sauce’s non-Scandinavian components – there’s enough homegrown flavour in it to suggest the sauce owes as much to Europe as it does to Asia. While taste is behind Lov’s decision to make her own XO sauce (“I haven’t tasted an XO sauce in a jar that is as good as I would like it to taste”), there are other reasons driving her decision.

“We see it as a sustainability project in a sense,” says Lov. “We try not to waste anything, especially not seafood which is very expensive and sad to waste. Whenever it’s possible, I want things to be local. For me, it’s common sense.”

Although the scallop with XO butter is no longer on the Tigermom menu, the XO sauce has become one of the restaurant’s more versatile condiments and is used to add punch to stir-fries as well as grilled vegetable sides (ears of baby corn, say). Like Tigermom as a whole, it’s a condiment that challenges the status quo when it comes to Asian food.