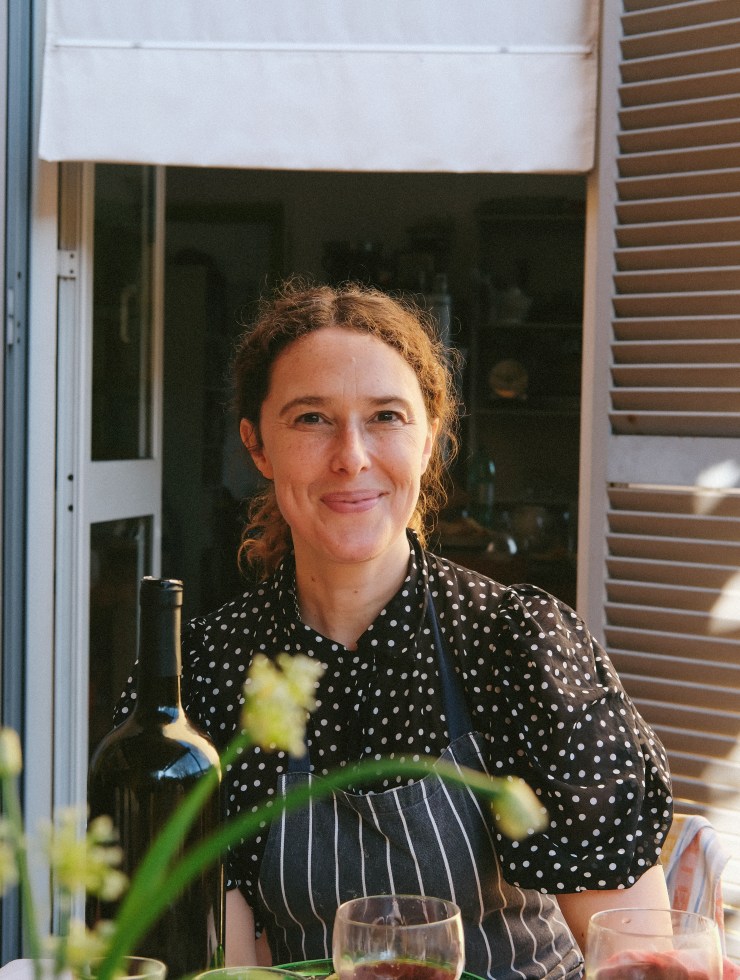 Rachel Roddy has resided in Rome for nearly two decades and describes herself as a home cook who writes or a writer who cooks. She began sharing her newfound knowledge of her adopted home via her excellent food blog Racheleats, as well as contributing to a host of publications which include an award-winning weekly column in The Guardian called A Kitchen in Rome. She has written three acclaimed cookbooks: all essential reading for anyone with an interest in Italian culinary culture.

Rome is a really visceral food city – the chicory grows through the gaps in the pavement and the capers are crawling all over the walls – it’s just one big, edible, chaotic, wonderful thing. I tend to steer away from giving restaurant recommendations to anyone other than really good friends because it’s tricky with Rome – it’s a complicated food city. It has only been the capital of Italy since 1861, but has always been a centre of pilgrimage. Even though it’s a busy, touristy city and lots of tourist places may not necessarily be serving the best food, we need to step away from our snobbery and be mindful before ruling a place out. In Rome, be guided by your gut instinct: if you like the look of somewhere go in, and if you like it go back.

A Truly Democratic Place To Eat and Drink

Testaccio is a relatively modern quarter with ancient roots and is a great area to eat and to understand a bit about Roman food. The thing about Rome is, rather than knowing lots of different places, it’s great to just get a clearer idea of how Romans eat, and Testaccio is the perfect place to do that. We’ve been living in the same building for 17 years and we’re in a block above a bread shop, a butchers, a bar and a trattoria and I absolutely love it. It’s allowed me to feel like I’m part of the city and to be in a great position to write about food because I can smell it from my apartment. Gran Caffè is the bar under my apartment and is so not grand. It’s run by two wonderful Neapolitan brothers, it’s tiny, it’s very busy and I love it. It’s in Piazza Testaccio, a truly democratic place with lots of tables outside so you can get something from the bar and take it into the Piazza which is inhabited by everyone from the morning until the evening. It’s a lovely place to eat and drink. It’s also a good idea to go to the Testaccio market. It’s an ordinary, functional market that’s full of locals and of what you should be eating. You’ll see guanciale (Italian cured meat made from cured pork jowl or cheeks) and pecorino, you’ll see artichokes and bitter greens when in season (in spring), you’ll see the offal in the butcher stalls – and that’s what you should be eating in the trattorias.

Linari is a patisserie and cafe with a big bar. It’s hugely busy from morning until night, but is particularly packed in the morning and the perfect place to experience a Roman breakfast. It’s got great cognetti, a sort of Italian croissant. It makes maritozzi, sweet yeasted buns filled with cream. It has ciambella, fried ring doughnuts coated in sugar. It does little pizzette. Look out for these big cake shops-slash-bars on the outskirts of Rome, because they are good places to have a tramezzino, which is a toasted sandwich made with sliced white bread. If I’m on the run, I will grab a chinotto (Italian carbonated orange drink) and a tramezzino with ham and mozzarella or hard-boiled egg and salami, or the really Roman one with tuna and carciofi alla Romana (little preserved artichokes).

“Roman Trattorias are 80% Owned by People From Abruzzo”

Trattorias feel more like pubs than restaurants. When I realised that what was familiar about trattorias was that they reminded me of my granny’s pub in Manchester, it changed everything for me. Piatto Romano is the local trattoria that’s a minute away from my apartment and I go there all the time for classic Roman food. It’s a great Roman trattoria run by a guy called Andrea. He shops at the Testaccio market every day and the menu has a great emphasis on vegetables. Rome is a city of greens so I always tell people to look out for them. In season, he’s always got artichokes one or two ways. Like a lot of the trattorias in Rome, It has Abruzzese roots. Roman trattorias are 80% owned by people from Abruzzo, so it could be argued that all the classic Roman pastas, the amatriciana, the carbonara, the gricia and the cacio e pepe have Abruzzese roots. It makes sense as they are all variations on one theme – pasta, pork cheeks and pecorino cheese. Piatto Romano is a great place to be introduced to Roman food: the fried starters, the artichokes, the hairy greens, the classic Roman pastas and then, the offal. There’s oxtail, trippa alla Romana, kidneys and heart, followed by the classic Roman secondi (second course).

Be Led by Your Nose to More Traditional Trattorias

Armando al Pantheon is a recently refurbished family-run trattoria in the centre. It’s very popular – a sort of centre of excellence really – with dad Claudio in the kitchen and his daughter Federica out front. It’s quite elegant, but classic Roman. He makes an incredible ragu with chicken livers, some porcini mushrooms and a tiny bit of liquor, served with fettuccine. I often go there by myself, I’m not sure why – it’s just a lovely place to go on your own. We live above Felice a Testaccio. It’s old school and it’s been there for forty years. It does whole roasted chickens and great big trays of lasagne and cannelloni, veal cutlets with boiled potatoes and spinach and a fantastic artichoke and potato bake. It’s a smart, small canteen with lace curtains that you could easily walk past, but it’s brilliant and it serves the community. A sign to look out for as you’re going around Rome is “tavola calda” (hot table). In the centre they can get very touristy and I use that word in its truest sense, not in a derogatory way as touristy things can be great. But looking for tavola caldas out of the centre is always a good idea. Be led by your nose.

A Family-Run Trattoria That’s Moving With the Times

La Tavernaccia da Bruno is a beautiful example of a trattoria that’s moving with the times. It’s a very lovely, functional, family-run trattoria that used to be quite traditional but now has this wonderful natural wine list, lots of it from Lazio, and where everything is evolving in the way that you’d hope it would. There’s a wood oven that they cook a lot of the dishes in. They do lasagna on Sundays and make a beautiful braised rabbit. They’ll often do big trays of trippa alla Romana with roasted potatoes and chicory.

Huge Emphasis on Ingredients and an All-Natural Wine List

On the other side of Rome near San Giovanni is SantoPalato, which would probably consider itself a neo-trattoria. It’s very trendy, it’s small and it’s not very comfortable, but I don’t mind that. There’s a huge emphasis on ingredients and an all-natural wine list. It has a wonderful chef called Sarah Cicolini – she’s a delight and her food is absolutely beautiful. Her carbonara is particularly exquisite. The young crew of chefs at Marzapane have lived and worked in London and Paris and Japan and they cook everything over fire. They’re really adventurous and a wonderful addition to the city’s dining scene. What they do is very avant-garde and rather smart. I love the young chef Francesco – he’s one of my favourite people to talk to about food. He made me this delicious pork with red pepper, cooked on the grill. The pork was almost like tuna – it was absolutely incredible.

Wine and Dine with Generous Hosts

I’m not all about natural wine – I like any wine if it’s nice. At Testaccio market there is a stall called da Corrado, a recent addition run by Corrado and his best friend Luca. It’s a rather lovely small store selling natural wines, cheese and about eight dishes that Corrado makes that he calls “la cucina ritrovata”, or rediscovered dishes. It’s got six stools and you can sit and have a plate of pasta and a glass of delicious wine and talk to two of the most knowledgeable, gentle people about food. I’m totally biased because they have become good friends, but they are just so generous and wonderful. Les Vignerons is another great natural wine shop. You can get a bottle from Antonio and lean outside to have it with a bag of crisps. The thing I like about people like Corrado and Antonio is that they both really value the fact that everything is connected. This isn’t a city where there’s good new restaurants and bad old ones. It’s all imperfect but somehow functioning together, and they really recognise and respect that. I love Fiaschetteria Marini which is an old wine shop in a beautiful Art Deco building. It’s located near a lot of offices and is full of workers having lunch. We’re really lazy at home and tend to eat and drink very locally but we’ll travel for Fiaschetteria Marini. It has my favourite brand of pasta and an emphasis on Tuscan wines. I love big trays of food and the form and function of that type of cooking. On the menu there’ll be a couple of pastas and something like a lentil and farro soup and an amazing sformato di cavolfiore (mashed potato and cauliflower bake).

The Two Pizza Types You Shouldn’t Miss in Rome

There is a lot of nice street food in Rome and in particular, pizza. There’s basically two types in Rome, pizza tonda (round pizza) and pizza al taglio (by the slice). One of the most popular is pizza bianca, which is cooked in three metre lengths and sold by the slice. Most bakeries will still split your pizza and fill it with mortadella, prosciutto or tuna and preserved artichokes. It’s such a good way of eating in Rome. Try it at Panificio Passi.