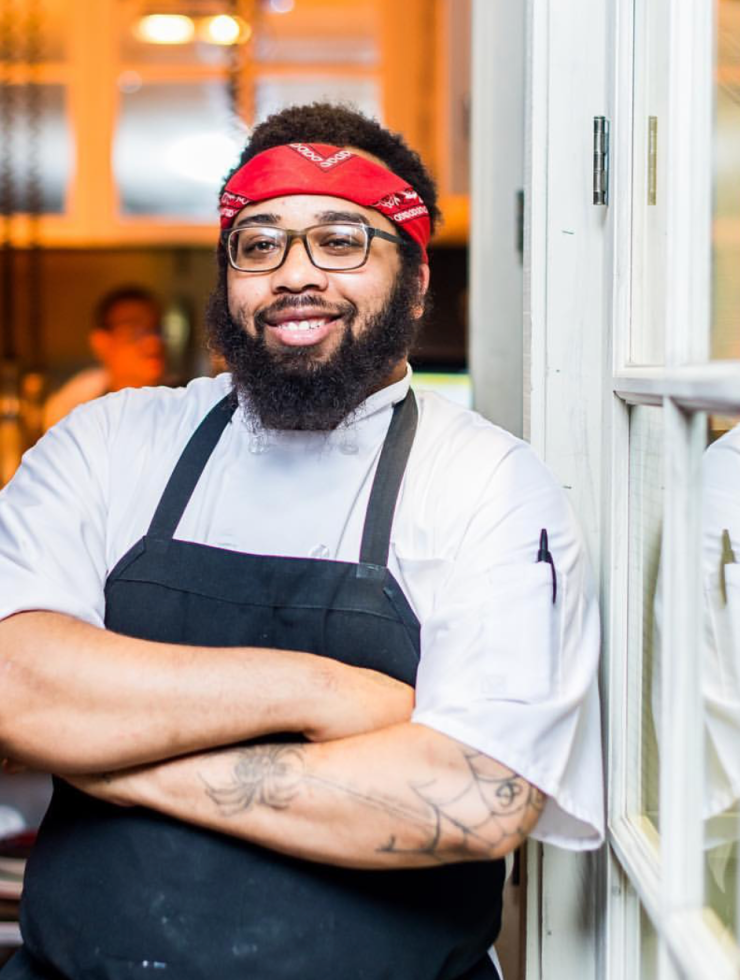 Kurt Evans doesn’t just want to rep Philadelphia: he wants to feed it too. A chef that has called Philly home his entire life, Evans is leading the fight against food insecurity via projects such as EMI Dinner and Everybody Eats. His other passion is sharing stories of Black America’s culinary heritage – just one of the many cultures and communities that make up Philly’s diverse food scene. Jump in, there’s a lot to take in.

Philadelphia’s food scene is very unique. First of all, it’s not uptight at all. There’s no fuss. You don’t have chefs trying to ram different high-end concepts down your throat. There are a lot of good casual places to eat. Food is fun in Philly. Secondly, we’ve become a melting pot of cuisines and we have chefs that are pushing the boundaries on how to define what our local cuisine is.

The Dutch Influence on Pennsylvania’s Cuisine

At Elwood, chef Adam Diltz reflects the Dutch influence in Pennsylvania’s cuisine. He cooks some of the regional food that Philadelphia and its surrounding areas ate in the early 1900s. He makes a turtle soup that’s really good. It’s served with a pepper-sherry vinaigrette that really makes the dish pop. Squirrel is not something that’s served on a lot of menus, but he makes a squirrel dish that’s pretty cool. Rabbit will also make an appearance on his menu. It’s all served in a modern way, in a very nice, small-seated restaurant.

Honeysuckle is a good spot for Black American heritage cooking. The chef, Omar Tate, uses a lot of art and poetry to convey his menu. One of the things that Honeysuckle is doing that is pretty unique is a breakfast box for $40. It has things like a sweet potato muffin and a black-eyed pea scrapple. It’s called “scrapple” because it has scraps of different animals mixed with grains – like barley – to make a piece of compact protein that you sear on a grill. Scrapple is something that’s unique to the Pennsylvania area.

The Bynum Brothers are known restaurateurs in the city of Philadelphia. They own four or five different restaurants that specialise in Black Heritage cooking. Growing up, I frequented Warmdaddy’s, one of their restaurants in South Philly which closed down during the pandemic. When I got into cooking, I had the opportunity to work for the Bynum Brothers at  South which is an extension of Warmdaddy’s.

Drinking and Dining With Friends in the Industry

If industry friends are in town, I like to take them to Friday Saturday Sunday. One of my favourite dishes there is sweetbreads over caramelised plantains. Paul MacDonald, the bartender there, is really great at his job. Try the Assassin’s Handbook, with cognac, Jamaican rum, Averna, a mulled wine shrub and habanero. I also take friends to Vernick for its bar program. My usual order is a Last Word, which pretty much sets the standards. I’ve been dabbling with Old World gins lately, and Vernick plays around with ageing gin in whiskey barrels. The gin comes out brown-coloured and makes a good Manhattan. I take a lot of people to Irwin’s as well. It’s a new Italian-American restaurant on the rooftop of the BOK building, a workspace for small businesses, artists and nonprofits. Mike Ferreri is the chef at Irwin’s. I usually say “surprise me!” and he’ll send out different mezze and large plates. One dish that I remember is a cannoli stuffed with ricotta, mixed mushrooms and spinach, served in a mushroom stock. Gabrielle’s Vietnin is another spot I love. Chef Thanh Nguyen is bringing the truest flavours of Vietnam to Philly. I can’t forget Forsythia by chef Chris Kearse that serves French bistro food with a contemporary twist. It has a cool industry night on the last Monday of every month.

River Twice is a modern American restaurant with a really good oyster selection. During Covid times, a lot of restaurants had to shift what they were doing and reinvented their menus. Most places added takeout items like burgers but the teams at River Twice and Friday Saturday Sunday stuck to their eight-course tasting menu format.

Cristina Martinez is an undocumented worker in Philadelphia who started a lot of initiatives for the right to work as an undocumented immigrant worker in the city. She cooks traditional Mexican food at a restaurant called South Philly Barbacoa and makes everything the way it is traditionally made in her hometown of Capuhuac in Mexico. Chef Chutatip “Nok” Suntaranon has a really good Thai restaurant called Kalaya. The cooking is pretty much how she would make it at home and comes across as deeply personal. It’s also really spicy, but everything is amazing.

A Great Plan B

People are always shocked how the menu at A Kitchen constantly changes. You almost never have a dish twice. The cuisine is New American bistro-style, presented in a really seasonal menu of small plates. Chef Eli Collins is great and does it all out of a small kitchen. What’s pretty cool is that there’s a bar connected to the restaurant called A Bar. It’s focused on natural and organic wines – mostly from the New World – craft beers and cocktails. Sometimes it’s really hard to get a reservation at A kitchen so I end up going to the bar instead and have a few drinks and a bite.

Michael Solomonov has done a really good job bringing Tel Aviv-style dining to Philly in pretty much three different dining categories, from high-end in Zahav; to fast-casual in Laser Wolf; to takeout in his falafel joint Goldie.

Philadelphia is becoming a real pizza town. A lot of shops are popping up and are specialising in a range of styles. Sometimes it’s the only thing they do and other times they’re serving other dishes as well. Pizza Gutt’s Daniel Gutter has a restaurant called Circles and Squares where he makes Detroit-style pizza. Joe Beddia has a really good pizza shop called Pizzeria Beddia. Marc Vetri makes a Neapolitan pizza with slow fermented dough and great seasonal ingredients at Pizzeria Vetri. Marcie Turney and her team at Good Luck Pizza Co are doing a good job with crisp, thick-crust pizza lightened through a high hydration, long fermentation process. They also serve a lot of Italian-American-inspired appetisers and plates. We also have Sally, a natural wine bar which does small plates and sourdough pizzas. Stina Pizzeria is run by husband-and-wife team Bobby and Cristina, who not only serve great pies, but also support different social causes each month by donating a portion of the proceeds.

Where To Buy Meat and Produce

If you go down to the Reading Terminal Market you can get really good fruits, vegetables and proteins from a lot of different vendors. Martin’s Meat & Sausage is great. There was a point when the Reading Terminal Market was going to close down but it made a comeback after the pandemic. We have a lot of vendors down 9th Street as well, especially around 9th and Washington [Street]. A lot of our butchers and meat shops are down there. Primal Supply Meats is pretty good and so is Esposito’s Meats.

Philly has a lot of coffee shops. Alchemy Coffee does really good pour-overs. Rival Bros is a pretty good option too. I like to go to Franny Lou’s Porch because it’s really big on breakfast pastries. The Second Daughter Baking Co. is another good place for cakes and pastries. The La Colombe chain has a lot of shops around town with a really huge one in the Fishtown neighbourhood. It has a really good pastry program and you can have a full-on breakfast there. I recently went to a really cool coffee shop that’s also a comic bookstore called Amalgam that is owned by a black woman.

The top three cheesesteaks in Philly are at Dallesandro’s, Larry’s Steaks and Max’s Steaks, respectively. My standard order is a regular cheesesteak with salt, pepper, ketchup, fried onions, pickles and mayonnaise. Ummi Dees Burger Bistro in North Philly is really good. It makes a lot of different burgers: the salmon cheesesteak one is my favourite. Weckerly’s is where I go for ice cream. It makes really good ice cream sandwiches in different flavours too.

A City That’s All About Community

I’m part of an initiative called Everybody Eats that does food giveaways in and out of the city. Our work started in Philadelphia but we’re now doing some work in Chester which is on the outskirts of Philly. The West Philly Bunny Hop is another organisation that does a lot of food distribution. Sharing Excess also provides a lot of food to our communities. These donation groups sometimes provide raw foods, but most of the time they’re cooked meals because many people in the community don’t have the means to cook.

I’m working on a restaurant project that’s going to be called The Last Dragon. We’re starting with pop-ups towards the third quarter of 2022. A lot of old Chinese takeout restaurants have shut down in various Black American neighbourhoods creating a food desert. The idea was to try and revive these Chinese stores that are culturally relevant to Black Americans. The food will be tailored to Black American culture, because that’s the community we’re serving this food to, but it’s going to have flair from the Chinese dishes that were previously served in these types of stores. They served fried rice, so we’re going to serve fried chicken fried rice. We’re going to serve collard greens egg rolls. We’re making things like an oxtail rangoon, inspired by crab rangoon, which is crab folded into cream cheese, stuffed into a wanton that’s deep fried. We’re making a fried dumpling of charred sweet potato and cream cheese that’s folded in with oxtail. There’s a North American Chinese dish called General Tso’s chicken, so we’re going to serve a General Roscoe chicken dish, named after General Roscoe [Robinson Jr.] who is the first black, four-star general in America.