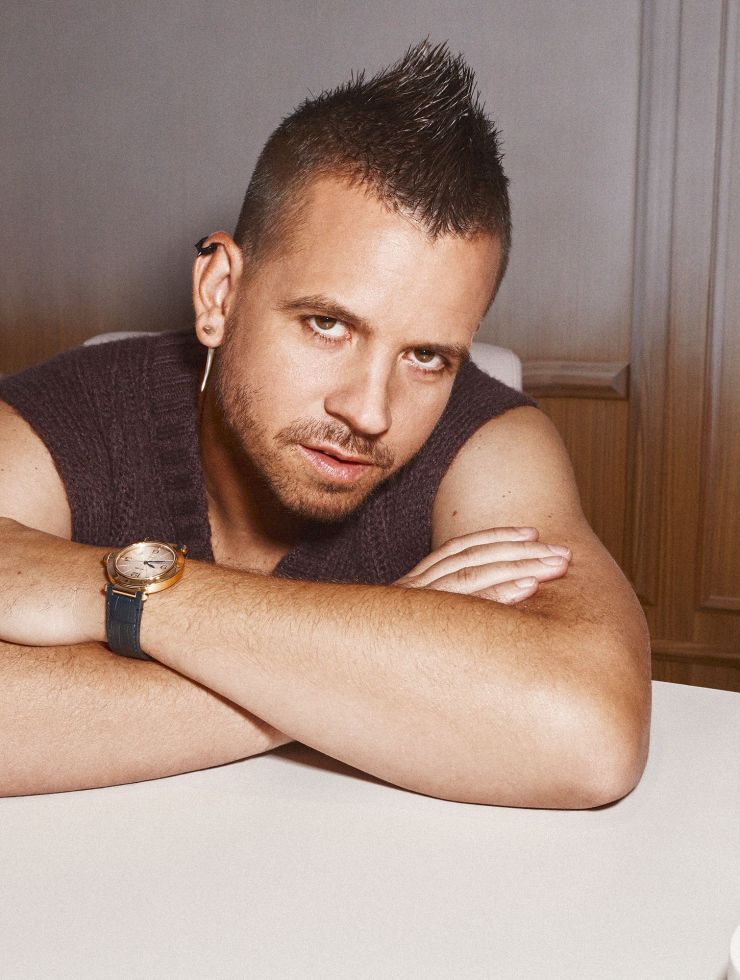 Dabiz Muñoz is recognised for his courageous cuisine, his limitless fantasy and for being the youngest chef to lead a restaurant to its third Michelin star. In his Madrid wonderland, [restaurant] Diverxo, he has created a universe where pigs fly (inspired by Spanish proverb “Los Cerdos No Vuelan” which translates to “pigs can fly”): it’s highly advisable to leave all presumptions at the door and succumb to an unprecedented ride. In fact, Muñoz believes that Madrid hides more gastronomic adventures today than it ever did and he wants to help you reveal them one at a time.

Catalonia and the Basque Country were always considered Spain’s gastronomic destinations, but over the last five years, Madrid has made itself heard and recognised. Thanks to the efforts of young chefs with fresh ideas and talent from the industry all round, Madrid is becoming one of if not the most exciting gastronomic landscape in Spain. The influx of investors to the city helped speed things up. It brought a certain type of attention that led to important hotel openings such as the Mandarin Oriental Ritz and the Four Seasons Hotel Madrid. This marked a transformative stage in the city’s development and made Madrid very attractive to people from the industry from near and far. Today, Madrid has it all: all types of cuisines that range from extremely traditional to wanting to push the limits with cosmopolitan sensibility. The dining scene continues to draw more and more people in and it’s allowing us to become better at what we do.

There are two fresh produce markets where the locals go. One of them is Mercado de Chamartin and is one of my favourite places to shop. It has two floors showcasing an amazing selection of food – you basically find everything here. The second one is Mercado Maravillas. It’s a bit bigger and is not exclusive to Spanish products. It’s the perfect place to shop for food imports. Madrid is a large capital city that has welcomed a lot of immigrants over the past two decades. Thanks to them our market halls are a lot more diverse and this diversity has organically extended to the types of cuisine you get to access. So in a way, Madrid’s food culture is the coming together of all the backgrounds that make up the city. Mercado Maravillas is a great place to witness this.

Some of the Most Influential Restaurants in the Country

When I opened DiverXO in 2007, it was a true vanguard for its time. I tried to explain what I wanted to do to the people around me at the time, but everyone thought it was too modern for Madrid and that people would struggle to understand it. The city has proven them wrong and has encouraged me to open another restaurant called StreetXO that’s more casual this time. Although the two restaurants have become a reference for creative dining in Madrid, long before I came along – more than 40 years ago – Viridiana by chef Abraham García was the first restaurant to be associated with creativity. It’s a place that’s very significant to Madrid’s culinary history and is worth checking out if it’s for that reason alone. Another important establishment is Sacha, a cosy neighbourhood restaurant founded in 1972. It’s a historical landmark that continues to impact the city’s gastronomy to this very day.

Madrid’s Restaurants With the Best Sourced Produce (and Pizza)

Roostiq is one of my absolute favourite places to eat. It does Mediterranean comfort food using amazing produce that’s cooked in a simple way. It has its own biodynamic farm in Ávila, northwest of Madrid, where they grow organic vegetables and raise grass-fed chicken and acorn-fed pigs. It makes – what is in my opinion – the best pizza in Madrid. It’s not really Italian-style but it’s so damn good. Another place I like to visit in my free time is Ugo Chan, opened this year [in 2022] by chef Hugo Muñoz. I anticipate a long-lasting success for this place. The cuisine is a mix of Mediterranean and Japanese and the menu changes quite often. The best way to eat there is to go with a bunch of people and order as many dishes to share as possible. O’Pazo is a restaurant I appreciate for its simplicity and care for the product. It has excellent seafood: you especially shouldn’t miss out on the angulas (Spanish baby eels). Estimar cannot go unmentioned when talking about seafood and mastery of sourcing and technique. Everything here tastes fantastic, but I especially recommend anything fried the Andalusian way.

Where I’ve Been Going for Years

I love paella and I have two long-time favourite spots to get my fix. Berlanga executes it perfectly, the Valencian way, which is believed to be the original paella recipe made with round-grain rice, chicken, rabbit, a variety of beans and garden vegetables. I’ll sometimes try their seasonal rice dishes. When I want something a little more informal – which is often on a short lunch break – I go to Samm. It’s very low-key compared to Berlanga, but the rice dishes are equally as wonderful. The Valencia-style paella is great here too, but I also recommend the potato tortillas, the pimentos (peppers) and the meat specials which change daily. Another place I’ve frequented for many years is a one-Michelin-star Japanese restaurant called Kabuki. It’s been around for nearly 20 years – I have been going there for at least 15 of them – and it was the first of its kind to merge Japanese and Mediterranean cuisines in Spain, creating a version of sushi referred to as “Kabuki”. This style of sushi was pioneered by this restaurant and over the years gained popularity in different parts of Spain.

Where I Go To Celebrate Something Special

In my opinion, all of the two-Michelin-star restaurants in Madrid deserve a third star, which I hope they’ll be rewarded with very soon. I always go to Paco Roncero Restaurante when I have something to celebrate. It has a unique sense of hospitality and is in a marvellous location: the top floor of the Casino de Madrid which boasts spectacular view of the city. Ingredients stand centre stage in Roncero’s highly refined dishes that have drawn inspiration from everywhere. I also like to treat myself to a meal at Dstage. I’m always curious to see where Diego Guerriero’s fantasy world has taken him. His cooking style involves a variation of classical and modern techniques and he works a lot with fermentation, but he still manages to present a Spanish cuisine only with contemporary flair. At both restaurants, I go for the tasting menu to experience a real-time expression of the chef’s most recent discoveries. Smoked Room is another celebratory place that opened recently. The whole menu is built around fire and smoke. The meat part of the tasting menu is outstanding but what they can do with vegetables and desserts is also impressive. I love their soft cakes that are slightly touched by smoke. Coque is also a great choice on special occasions. It’s very creative, but the cuisine still feels very much Spanish with a lot of references to Madrid’s unique food culture. It’s highlighted in dishes such as the lacquered suckling pig with crispy skin, pork chop confit and creamy trotter saam with shiso leaf.

I love Negronis and if I’m not drinking one at StreetXo, I’m drinking it at Savas Bar where classic cocktails are irreproachable. You cannot use the words “Madrid” and “cocktails” in one sentence and not mention Salmon Guru. It does Michelin-star-calibre mixology and never stops surprising you. It has made a name for itself in cocktail innovation globally and is highly respected amongst the drink crowd in Madrid.

There are three restaurants which I really like and find to be extremely underrated. One of them is a Paris-meets-the-Med bistro called Lakasa. The chef has been very present in the Madrid food scene for more than 25 years. He cooks in a very creative way, without it ever feeling like it’s too much or that it’s taking away from the essence of a dish. It’s still really tasty food. Then there’s Charrúa, a Uruguayan barbecue restaurant with a large selection of quality beef and where the food is just fantastic. The third one is Noi and is an absolute favourite of mine. It’s a modern Italian restaurant with a highly elegant atmosphere. Here, I normally go for something traditional like a vitello tonnato, spaghetti aglio e olio or spaghetti carbonara and I ask the chef to suggest an additional dish of his choice.

Traditional Food That’s Not To Be Missed

My favourite dish has undoubtedly been the same since childhood and that’s cocido madrileño. It’s a typical stew from Castilian Spain cooked over low heat for several hours and consists of chickpeas, seasonal vegetables and a choice of meat and sausage. I always asked my mum to make it for me and I miss it every time I’m away. The best restaurant to try cocido madrileño is Casa L’Hardy. Pig’s tripe is another dish one shouldn’t miss when in Madrid. You can try it along with other traditional dishes at La Tasquita de Enfrente or Casa Labra. I also really like Bar La Paloma, a very humble but very legit tapas bar frequented by locals only. The two musts there are callos a la Madrileña – a stewed tripe that’s slow-cooked for hours over low heat – and the rice dish with lobster.

The Best Tapas in Madrid

Street food in Madrid is all about tapas. La Catapa is a very low-key taberna (Spanish pub) with a nice selection of high-quality tapas. I usually go for the croquetas with ham or cheese, cod tortilla and rice plates (since I’m a big fan of paella). Close by is Arzabal, another taberna with great tapas that has a couple of other locations around the city. Here, make sure to try the cod croquetas, the white beans with clams and the fried chicken. Taberna Laredo and restaurant Kulto are also great options for small plates. At Laredo, you should try the potato tortilla with anchovies, the rabbit cutlets and the green peas with jamon (only served in season in the spring). Kulto is great if you want tapas on the creative side. I always go for the seafood options here, like the signature Barbate shrimp toast with a Vietnamese twist. You can also try something that’s a little more typical like the deep-fried pig ears. For Basque-style tapas, I go to Arima and if I’m specifically craving a potato omelette, I’ll head to La Maruca.

What My Memories Are Made Of

Filandón is a 10-minute drive from the city and a restaurant that me and Christina [Pedroche, Dabiz’s wife] have been going to with our family for many years, especially when we have something to celebrate. It’s a very intimate and welcoming place that’s fully immersed in nature. I love the grilled red prawn and croquetas here. You can have great rice dishes. You can have great fish and beef. But everything is fantastic here really.