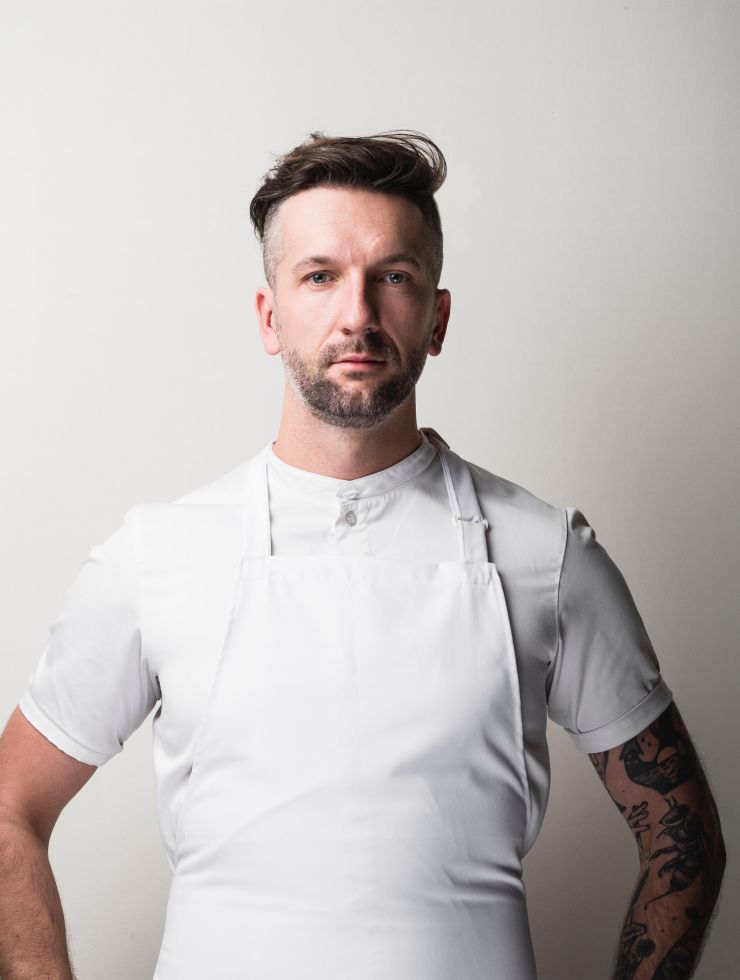 After more than a decade away from Krakow, Przemysław Klima returned to his hometown in 2019, armed with ideas and experience gleaned from Noma and Kadeau in Copenhagen as well as Michelin-starred Polish kitchens, Sense and Atelier Amaro. On his arrival, Klima took over Bottiglieria 1881, transforming the wine bar into a passionate expression of Lesser Poland’s larder as well as the city’s first Michelin-starred restaurant. The ambitious chef shares other essential addresses for exploring and tasting Kraków’s food culture.

Forgotten by both tourists and locals for many years, Małopolska — the Polish name for the Lesser Poland Voivodeship region — is a region worth exploring. I’ve been away [from Kraków] for more than a decade and from my perspective, the local food scene has changed immeasurably. Consumers and chefs have grown to be more open-minded and eager to discover new experiences. Kraków is a great starting route for anyone heading to visit Warsaw or the Polish highlands down south. There is no such thing as Kraków cuisine, but rather Małopolska regional cuisine which is part of the broader Galician cuisine that encompasses the former Austro-Hungarian territories such as Slovakia, Austria and the Czech Republic. Historically, this was one of the largest gastronomic trade routes in Europe and it remains today. Although the communist regime disregarded this route, many of my guests can still associate these references in my dishes. They are happy to rediscover these tastes at Bottiglieria 1881, but in a contemporary manner.

Instead of naming any traditional dishes, I’d say it’s the regional products that stop the show. Although much of the produce I use is not easily accessible for the public – things like the venison I get from the local huntsmen association, fruits from private orchards and farmer-direct vegetables – people can shop at the oldest open market hall that attracts vendors from all over the region every day. The produce is really high class and inexpensive. You’ll find cheese or fresh milk that still smells of hay sold by old ladies from Lipnica Murowana or Zakopane: a rare sight nowadays. Once, I brought a Norwegian chef friend to an egg stand at the market and bet him that they were all double-yolk eggs. He thought I was messing with him. As I cracked the third and fourth egg open with twin yolks, his eyes widened in disbelief. Some vendors offer produce from under the counter, but it takes a long time to get to know them and work out these relationships. I have my route around the vendors, but it would not be the same experience for everyone. There are now small gastronomic spots here where visitors can eat while shopping: things like a wine bar, coffee shop and places serving small Italian bites.

My Favourite Neapolitan Pizza in Kraków

I cook at home most of the time, but I’ll visit my friend’s pizzeria and trattoria Nolio from time to time. I’m a big fan of Neapolitan pizza and know that each time I eat there, I’ll eat well. They use genuinely great products and there’s no fuss.

“Kraków Can Easily Be Regarded as the Polish Wine Bar Capital”

Wine bars swarm the city. I feel Kraków can easily be regarded as the Polish wine bar capital. There’s one cool spot called Żonglerka. Boy meets girl, opens a small place in a corner tenement house and just cooks whatever he feels like. Every day it’s something different. He’s got funky natural and biodynamic wines from small producers. He pours the glasses and talks. It’s all freestyle. The service is obligation-free, as is everything else. I find this style quite appealing: you come in, grab a glass, sit on the pavement or bench and have some peace and quiet.

Where To Go For After-Dinner Cocktails (And Maybe More Snacks)

The Trust is a cool cocktail bar tucked in one of the side alleys of the Kazimierz neighbourhood. It’s dope, it’s ambient, dark and lounge-like: the guys make hip things there. After dinner, definitely go for a good cocktail or two. The district also has three clusters of food truck parks. They’re very popular and cater to a lot of food fancies, from craft burgers and Belgian fries to more creative inventions.

Zapiekanki z Okrąglaka on Nowy square is an institution and has been there for years. Zapiekanki are half-metre baguettes that are split and loaded with fillings of your choosing, be that cheese, chives, onions, salami. You name it. You can go there at 5am drunk and it’s super cheap and fast. The round building (Okrąglak) earned its fame for these long bites. Windows selling zapiekanki made up its entire circuit and are all equally crowded. People drink while waiting in line and you’ll meet a thief, a guy in a suit, anyone. You’ll always find someone chatting you up. Within this small perimeter there are a few bars, pubs and shops with alcohol. So, it’s all very convenient. Kebabs are in the past, zapieksy – as we call them – are far better and made to order.

Tourists love to take pictures at Kiełbaski z Niebieskiej Nyski, a quintessential address near my home. Two older gentlemen in their 70s park an old, blue Nyska car at around 7pm on the street and grill sausages on a worn, metal grill they welded from rods. They only have these sausages, old-school orange sodas in glass bottles, bread rolls and mustard. That’s it and it’s all dirt cheap. There’s a hockey stadium nearby. I remember how last year I went there after a match and it was minus-16 degrees and there they were doing their thing. They don’t even speak to each other. They just grill the sausages. Maybe they’re tanked or something. No reason to think otherwise. It all feels like 1993. Guys in Bentleys draw in, taxi drivers, everyone. The sausage is rad and lightly smoked. A fire-grilled sausage isn’t something you find in the city every day.

Hotel Pod Różą houses Restauracja Pod Różą, a nice, modern restaurant. A friend of mine runs the kitchen. What makes the place is its location near town’s main square: very handy for visitors. The hotel itself is a 17th century building. Old frescos adorn the walls inside and make quite an impression. Conversely, the food served is casual and relax. It doesn’t want to scare anyone off.

Zakopane is the cradle of Polish cheesemaking. The region’s beautiful soft bundz and hard, smoked oscypek are top class products and I use them on my menu in springtime. You’ll find them at Stary Kleparz (see above), sold by old ladies who still speak in the highland dialect. There are many fakes, though. To distinguish real sheep milk cheese from imitations is difficult. You have to trust the vendor or have a good, tested source. I get mine directly from a head shepherd, so I see how he makes it. The best cheese is made in spring when the milk is most fragrant. These real cheeses are only available until September when the sheep trail back down from the Tatra Mountain pastures, then it disappears. What’s left are lookalikes, hybrids of cow and sheep milk, or only cow milk cheeses. Some cheeses are even coated with smoke paint instead of being smoked.

An Introduction to the Wines of Małopolska

Owned by Piotr Jaskóła and Agnieszka Rousseau, Winnica Wieliczka is renowned for its great wines. I have a selection of them at my restaurant. The winery is only 20 km outside the city centre, so it’s best to drive there. You can go, drink some wine, talk to people and learn about the whole winemaking process. There’s also a wine trail created for the region called Małopolski Szlak Winny. It’s located geographically in Jura Krakowsko-Częstochowska [known as the Polish Jurassic Highland]. The climate is superb and the limestone is excellent for producing white, mineral wines. The whole route encircles Kraków and includes 50 wineries. There’s even a smartphone app for the trail that you can download and use to drive from one winery to another. Everyone will happily show you around and talk to you.

Day Trip for Trout to a Natural Reserve

If you’re out in Jura, there’s also Pstrąg Ojcowski (Ojcowski Trout) which is a trout farm run by Agnieszka Sendor and her mother Magda Weigel. You can go there and see the whole trout farming process, hang out and eat fresh fish. A natural reserve nests the farm. It’s great in the summer and about 30 to 40 minutes from Kraków by car. Many people go there. A couple of weeks ago I went there on a Sunday and had to wait more than half an hour for my fish. The trout is superb, either straight from the water or the smoker.