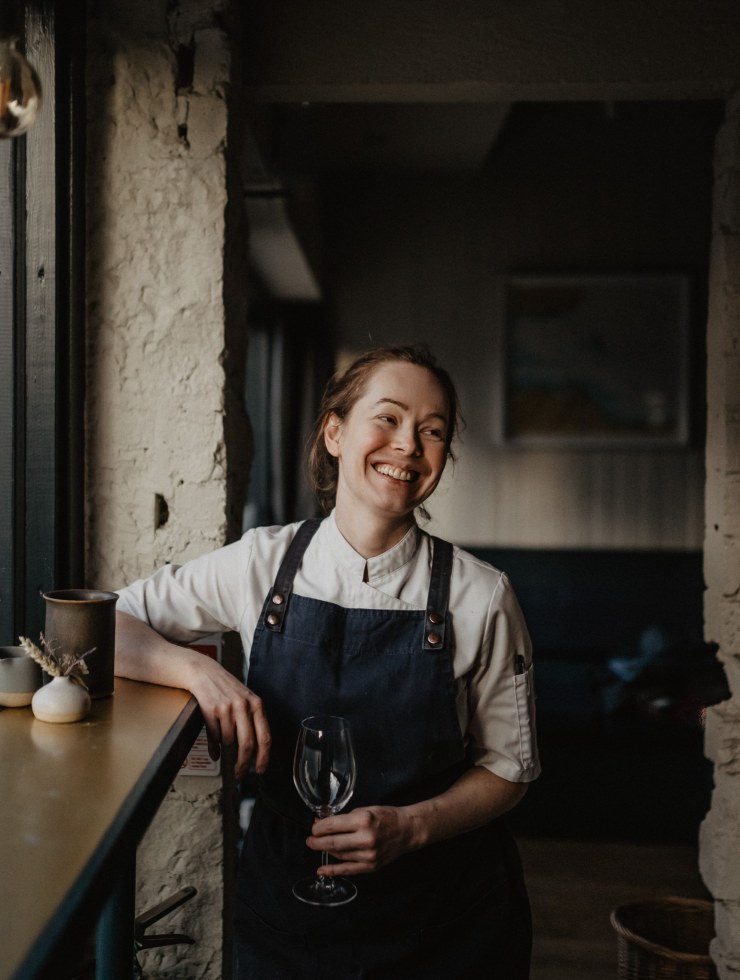 Roberta Hall-McCarron’s appearance on the BBC’s Great British Menu in 2020 might have heightened her profile, but it only takes a visit to her two restaurants in the north of Edinburgh to understand why she’s one of Scotland’s most talented chefs. She is a champion for Scottish produce and for Leith, the port district in the North of Edinburgh where she and her husband Shaun live and run their two restaurants. The Little Chartroom and Eleanore have helped contribute to a thriving and ever-evolving culinary scene in the area.

A Neighbourhood in Transition

Leith is a port area in the north of Edinburgh that has seen a lot of changes. It’s a part of town that certainly wasn’t as thriving as it is today. So many independent businesses opened up in the last 10 years and it’s become such a great little hub which is so nice to see. Both of my restaurants (The Little Chartroom and Eleanore) are there and it’s also where I live.

Perfect Coffee and Cakes By the Water

The coffee at Williams & Johnson Coffee Co. is fabulous and is roasted on the premises. The bonus for me is that it’s within walking distance from my house. They’ve recently built a little kitchen and have started making their own pastries to serve as well. It’s attached to a creative workspace where they host art exhibitions, wine tastings, yoga classes and other activities, so there’s always something interesting happening. It’s right by the water and a nice place to sit on a sunny day, drink delicious coffee and catch up with friends.

Alby’s is the perfect place to go if you want something casual but filling. It makes big, hot, tasty sandwiches with interesting fillings that change regularly, served between chunky slices of focaccia. You can have them to eat in or to take away. My standard order is the battered fish, which comes with a changing garnish depending on the fish: for example the smoked haddock comes with coronation mayo, pickled red onions, coriander and rocket. It also does a really good prawn toast with fried bread cut into triangles, crusted with a layer of toasted sesame seeds and hoisin sauce.

A few doors down from my restaurant [Eleanore] is Gulp Ramen, which was opened by a husband-and-wife team just before the pandemic. It’s a tiny place where they offer three different types of noodles to go in the ramen – with everything made in-house. They also have a fantastic snacks menu that changes frequently: things like a miso glazed lobster dumpling or veal sweetbreads with togarashi (Japanese spice blend). It’s just delicious bites which you can graze on while you wait for your ramen.

Mistral is next door to my other restaurant [The Little Chartroom]. It was opened as a wine shop by our friends during the pandemic and then last year they turned it into a wine bar. You can still go in and buy wine off the shelf, but you can also go for a glass of wine and a snack: things like freshly shucked oysters and charcuterie. They both have long careers working with wine and they bring an incredible knowledge to the place. I think it’s great to see that kind of business opening there and because it’s right next door to us, we’ve now got somewhere for people to drink before coming to us or after. It really helps to further build the community in the area by us all supporting each other.

Spry is set in a really beautiful minimalist space that’s very tranquil and calming. It doubles as a wine shop so you can just pop in and grab a bottle, but they also offer an a la carte menu of small plates and a five-course set menu. It’s one of my favourite places to go in the city because it’s a very relaxed and comforting room and the wine’s fantastic.

Both my husband [Shaun McCarron] and I used to work at The Kitchin when we were in our early 20s [Roberta as head chef and Shaun as restaurant manager]. It’s a very special place to me as it helped shape my career as it is today. Tom Kitchin has a big focus on using the very best of Scotland’s produce and on using all parts of the animals. All of the meat and fish are bought in whole and the butchering and filleting are done in-house daily. I’ve tried to adopt these elements into my cooking as much as I can. The restaurant is quite luxurious and decadent and a lovely place to sit and whittle away the hours.

Borough is quite similar to us in some ways: it’s also run by a husband-and-wife team, it’s quite small and is very much a neighbourhood restaurant. It does a very seasonal four-course tasting menu using local produce which changes quite frequently. The cooking is very simple in some respects but there’s also a lot of thought that goes into the menu and it’s very considered. They have also introduced a more casual sharing menu, which is what we had last time we were there. We got lots of snacky things to start like Padrón peppers and these amazing carrots cooked in different ways. There was a great pea and mint dip served with their house-made bread, which was so good that we asked for more.

Noto is the sister restaurant to Aizle, which is also fantastic, though I rarely get to go as it is open on the same days as us, whereas Noto is open seven days a week. It’s just a really good atmosphere with great food and cocktails. It offers small, often Asian-inspired sharing plates. A lot of the menu changes, but there are a few dishes that they always put on. I’m very guilty of ordering those dishes because they’re so good. One that stands out is an incredible crab butter, served with sourdough bread – very moreish. And then there’s the chocolate dessert. If there’s a chocolate dessert, I will generally gravitate in that direction and they do this wonderful dark chocolate ganache with miso and hazelnuts with a scorched meringue on top. It’s quite intense, but it’s fantastic.

A Renovated Pub That Retains an Old-school Charm

Another great place I love to go to is Nauticus. It’s opposite my flat, so it’s very convenient. It’s a stunning old pub that got restored to its former glory, retaining a lot of the original features with some quirky old-style décor. They are very much champions of all things Scottish: with the drinks that they’re buying or the products that they’re using to make cocktails, but also with the furnishings. What I love about the place is that it gets a complete mix of drinkers, so you could have an old man sitting there drinking a pint or a young, trendy hipster drinking natural wine and there’s no divide. The staff are amazing and a lot of them have been there since day one, which says something about the employers. It’s just a nice community there and a really good, fun place to go and you always see somebody that you know.

Bistro and a Bakery

The Palmerston opened last August [2021] in the west of the city and is run and part-owned by two young guys – one running the front of house and one in the kitchen. It’s very bistro-style: casual with very cool flavours. Their menu changes frequently and it’s quite rustic, approachable and very affordable. Their main focus is on getting whole animals, breaking them down and using every element of them. They also have a bakery making amazing bread and pastries which you get to take away or eat there in the morning before they start the lunch service.

Another fantastic restaurant is Timberyard, which has been around for quite a long time and is probably the most beautiful dining space in Edinburgh if not in all of Scotland. It’s quite minimalist and industrial but with warming and welcoming tones. As the name suggests, it’s housed in an old timber yard which has been lovingly converted into a stunning restaurant serving incredible produce-led food. It’s very much a family affair with two generations of the Radford family working across the front and back of the house. They offer a tasting menu and a natural leaning wine list and combine really interesting flavours of food with a light touch.