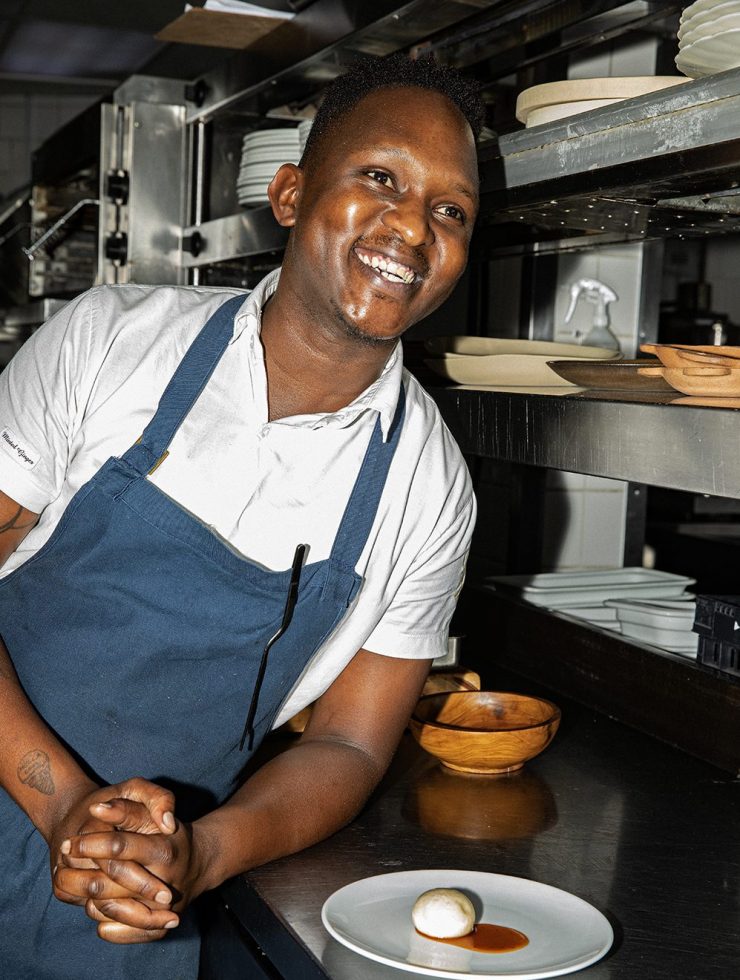 Africa’s food cultures are some of the richest in the world. Chef Vusi Ndlovu wants to reveal just how important, elaborate and exciting this heritage is. In his kitchen at restaurant Edge in Belmond Hotel Mount Nelson, he concotes dishes that highlight indigenous ingredients sourced from local markets, traditional artisans and small-scale farmers, supporting local businesses in the process. His work to promote the continent and its culinary wealth isn’t bound to the restaurant. He has co-founded the African Culinary Library, a resource dedicated to preserving and promoting this culinary wealth. Who better than him to walk us through the gems of Cape Town’s restaurants and bars?

Cape Town is a place that’s forever changing, home to a multitude of cultures and backgrounds. The length and breadth of the city is filled with cool cafes and bars; hole-in-the-wall restaurants that are nothing short of fantastic; and long standing culinary hotspots that have become hallmarks in their own right. You’ll never run out of options – that’s guaranteed. In recent years, a rise in sustainability awareness and in sensible restaurateurs and chefs, meant that our market fare has gotten so much better. This has fostered a pop-up culture that never really existed, adding another fun layer to the dining scene. It’s so refreshing to discover a little gem every now and then.

Bodega Ramen is a cool spot that’s very easy to miss. Friends of ours took us there on a crazy night out, and it was a great discovery. It has a bohemian vibe and plays indie rock. We had an array of Asian-inspired small plates like karaage chicken (Japanese fried chicken) and charred broccoli with black vinegar and furikake (Japanese condiment). I can’t wait to go back and try all of the dishes on the menu. Another gem is Frankie’s Bar, a live music venue that invites the coolest people to cook from time to time.

A Night Out in My Neighbourhood

There’s a popular bar down the road from where I live called The House of Machines. We always seem to end up there after a long day at work, or even after a good date night. I’m always keen on this place because it serves very decent food: you can’t go wrong with the smash burger. If time is on our side, we usually order a Vodka Gimlet then switch to the ever so popular Smoked Old Fashioned. Lately, I have also been enjoying a restaurant called The Bailey, firstly because I can walk there and secondly because it’s all the French classics done really well – no frills or fuss. I usually order the bouillabaisse to share, and if I’m feeling fancy I’ll share the fillet steak. The Bailey’s ground floor is a bistro, the second a brasserie and the third a whiskey bar. You can start the night at ground level and make your way up or switch the order up depending on your mood.

A good friend of mine runs a cosy restaurant called Vuur (the Afrikaans word for fire). It’s a converted old stable in the Cape Winelands on family-run Remhoogte Wine Estate. It has an intimate vibe and a great view of the vineyards and the wildlife that surrounds it. Everything is cooked over fire and served along with some great wines from the estate. It’s a place I would take friends from the industry to. Wine bar Penny Noire is a great window into the rich wine culture of the Western Cape. Before opening it to share some of her favourite bottles from the region, Penny Setti was the sommelier at Chefs Warehouse and Canteen. A pitstop at Publik is essential for all the natural wine lovers. It always has interesting, small batch wines to discover. The staff is super knowledgeable, so it’s easy to find yourself walking out with two cases of something after a long chat with one of them.

If You Want To Experience Cape Town’s Real Food Culture

Clarke’s has an American diner vibe, but the people that frequent it really show you a glimpse of what some parts of Cape Town are all about: they’re from all walks of life, are really friendly and always keen to share a story or two. If you’re feeling like a real adventure you have to go to Rands. It’s an outdoor event space that grills some of the best Braaied (Braai is South African barbecue) meat in Africa. I miss good braai when I’m travelling and nothing really beats coming back home to some boerewors (South African sausage) and lamb chops on the fire.

Chefs Warehouse is a restaurant I frequented for years. I first went there when I was working in Johannesburg and kept coming back for it. I still remember the first dish I had there: calamari with pineapple, spring onion and chilli. It did the small things really well which is why I think it has been around for years. Its famous tapas menu for two has always been a delight. The restaurant on Bree is the one I used to go to, but it has permanently closed. It now has a few other picturesque locations: Beau Constantina on Main Road Constantina in Glen Alpine, Maison on R45 in Franschhoek, and Tintswalo Atlantic on Chapman’s Peak Drive.

The Best of the Waterfront

The incubation program at Makers Landing is really shining a light on some great minds in the industry as well as introducing young talent. Emazulwini for example, is a restaurant born out of Makers Landing and is doing really well. Chef Mmabatho Molefe cooks Nguni cuisine with a modern touch. Charm’s Kitchen is another one. Chef Charmaine Govender-Koen really knows her Indian flavours and layers them in a beautiful way. The Oranjezicht City Farm Market near the V&A Waterfront has the most amazing seasonal produce and food stalls with a little bit of everything for everyone. Some of the producers there are really cool, so I go straight to them then home to cook a great dinner in no time. Always be sure to check out the mushroom stall: the name escapes me but you can’t miss it. You should try waterblommetjies while in Cape Town. They’re in season around July and August. The name loosely translates to “water blossom”. They’re not easy to work with so I was hesitant to work with them at first. They’re typically used to make a local stew called waterblommetjiebredie, but some clever cooks are doing cool things with them.

A South African Snack For the Road

You can’t go wrong packing some biltong (dried and cured meat) and droëwors (dried and sausage snack with coriander seed) before saying goodbye to Cape Town. If you find yourself in a reputable butchery like Frankie Fenner Meat Merchants pick up a few in cool varieties and flavours.