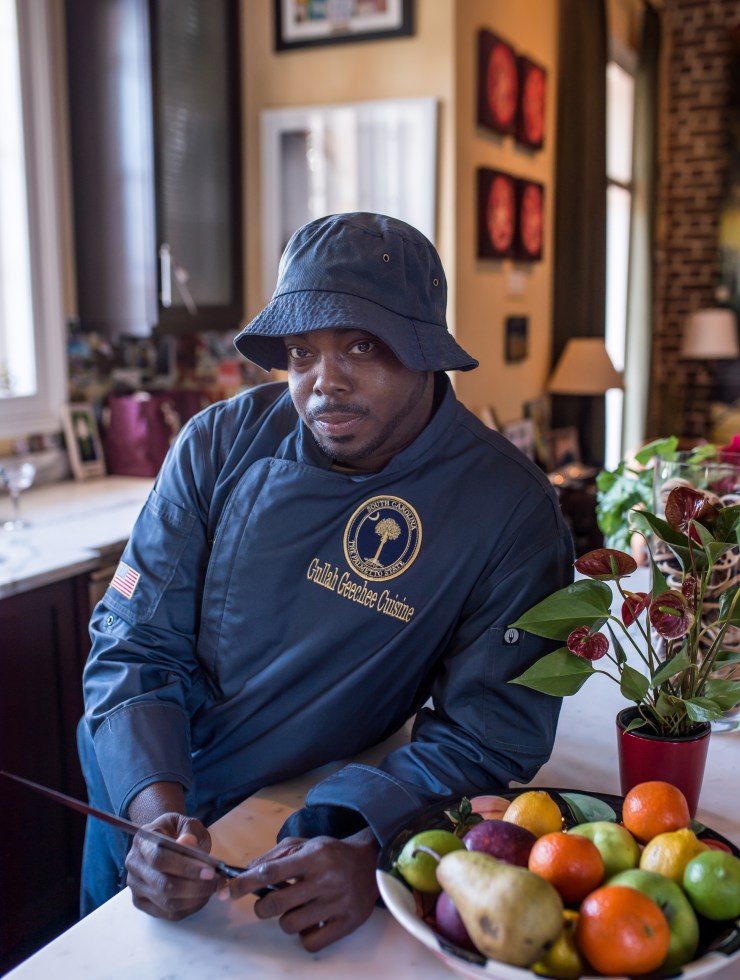 Wherever Benjamin “BJ” Dennis goes, he brings and shares his knowledge of Gullah Geechee culture, the African influence that helped shape modern-day American cuisine. Born and raised in Charleston, Dennis knows all the hidden mom-and-pop spots that represent the food culture of South Carolina as well as, more broadly, the Lowcountry itself. Get ready for a history lesson starring seafood, soul food and restaurants that aren’t really restaurants at all.

The Gullah people came from West and Central Africa with a knowledge of growing rice. Rice became the crop of the colonial period around here and is what made this colony the richest in America and one the richest places in the world at one point. The Gullah Geechee culture [Gullah has come to be the accepted name of the islanders in South Carolina, while Geechee refers to the islanders of Georgia] is very important because it is the dominating influence in Lowcountry food and with that comes many dishes that are recognised as American today. Some of the most famous chefs here were enslaved domestics. The knowledge of those who were enslaved and others who were free and ran their own restaurants and hotels – even during the colonial period – was passed on and is highly present in Charleston’s food culture today.

Jewels That Represent What the City Really Was

Although the food scene in Charleston has started to morph into what you see in major metropolitan areas and – if I’m honest – becoming more international and slightly more generic, the Lowcountry vibe is what always made Charleston special. The places that made the city special are kind of few and far between, but there are still some jewels that represent what the city really was. These places have survived gentrification and all the craziness that the city has been through. Hannibal’s Kitchen for example, has been around since the mid-80s and is still a place where you can get some real local food. Things like crab rice, shrimp and grits, shrimp rice and okra soup.

I like Early Bird Diner because it’s a classic Lowcountry-style diner. It’s a very popular breakfast, lunch and dinner spot that is very mixed because it welcomes people of all backgrounds. I feel as though some restaurants in the area can be very pretentious and don’t feel welcoming to those who may not be used to those types of spaces whereas Early Bird is a space that welcomes pretty much any- and everybody. I like the energy and vibe there. I usually order the breakfast plates: chicken and waffles, biscuit and eggs, biscuit and gravy. I also really like their shrimp and grits.

Nana’s Seafood & Soul is another place I like. It’s a classic crab and seafood house. You can get garlic crab; you can get steamed shrimp; you can get fry platters. It also does Sunday suppers with local Sunday soul food staples. Things like turkey wings, fried chicken and mac and cheese. But its seafood platters, in particular, are very, very good. Ravenel Fresh Seafood is a classic, Lowcountry, Gullah-style seafood house about 25 minutes outside the city. You can pick your fish and they’ll cook it for you on site. They give you the option of fried or steamed, which I love because steamed seafood is a very big thing in our culture and is not as present as it used to be. They also have a menu full of classic seafood dishes like conch stew (Caribbean potatoes and tomato stew) and seafood dinners like gumbo. You can also get broiled or fried oysters there. Gillie’s Seafood does a good job too. It has certain items on the menu that are indicative of the food culture here, like meatloaf, fried okra, lima beans and collards.

My Three Sons of Charleston [in North Charleston] is another good spot with a solid menu of local fare. It has a really good stuffed crab. The seafood platters with things like whiting fillet, scallops, devilled crab, shrimps and oysters are really good. The smothered seafood (covered in a creamy sauce) is really good. It also does Gullah rice with tilapia fish, sausage and shrimp; it does a pork chop and a pulled pork sandwich; it does shark steak. For dessert, you can have a peach cobbler or a key lime pie.

Many fancier restaurants throughout the region try to, for the lack of a better word, “elevate” these cultural foods into another level. Sometimes it’s hard to elevate foodways that are almost already perfect. The food has already been kind of elevated. I’m a seafood person and when I’m looking for a nice night out somewhere I like to go to 167 Raw, a seafood raw bar.

A Night Out in Charleston

Proof is a cocktail bar on King Street that I like going to. It makes really great cocktails and has an extensive liquor list. My go-to cocktail there has been on its menu since the beginning. It’s called Reverb and is made with Carpano Antica Formula vermouth, Henri Bardouin pastis, Proof’s ginger beer and Avinyo Cava. As far as local breweries go, I like Revelry Brewing. They make really great beer there: anything from Czech Pilsner and saisons, to wild ales and American sour beer. The rice lager is really good. They foeder-age [a foeder is a wooden barrel used to ferment and age beer] some of their beer in old barrels. If I’m looking for a place to go out for live music, Blue Note Bistro is the place. It’s got a really local vibe and good live music by local musicians. You can have a good drink and a nice bite there too.

Park Circle Creamery is a Gullah-owned, Lowcountry creamery in Park Circle. It has a great variety of flavours and a lot of seasonal options. The H&R Sweet Shop is worth taking a trip to. It’s a local establishment that’s been there since 1950. The place is known for its hamburgers, but is called a sweet shop because, back in the day, this was where kids went to get soda and candy after school. You can also get anything from a fried fish sandwich to a daily special. It’s a very nostalgic place that’s kind of lost in time. The guy who cooks and serves there still wears a bow tie and a hat. I think that’s one of our all-time classic Charleston spots.

If I’m feeling a knack for something nostalgic, I go to S&S Cafeterias. It’s an old-style meat & three type of place. You walk in, there’s a cafeteria line and you get yourself a smothered cube steak and pick out all these different types of sides from vegetables to pastas to gelatin [gelatinous desserts] to go with it. My parents took me there as a kid so it’s really one of those places for me.

Get To Know the Locals

I think the main thing when visiting Charleston is to get to know the people. Meeting locals, engaging with them and asking them about the real local food they make at home. It’s the elders in the household who’ve been cooking our food for years that know and do it best. There is a guy called Aaron who cooks out of his house on Saturdays. It’s almost like he’ll serve you some food and you give a donation. He’s known as “Aaron’s Seafood” and his space is probably one of my favourites to go to in Charleston. Every now and then, he’ll do some of the quintessential local stuff. He’ll have a variety of things on the menu: oyster, shrimp or crab rice; soup bunch and seafood dishes; plates with okra, all sorts of field peas, or a protein and vegetable sides to go with it.

I may be the only one focused full-time on promoting Gullah Geechee food culture, but there are cultural “elders” that have done it for a much longer time. They’re not chefs per se, but more like home cooks. Emily Meggett is the “matriarch of Edisto Island” and has just released a recipe book titled Gullah Geechee Home Cooking. You should also check out Sallie Ann Robinson’s book, Sallie Ann Robinson’s Kitchen: Food and Family Lore from the Lowcountry. There’s an older gentleman out of Savannah named Roosevelt Brownlee who’s a retired cook and talks a lot about the foodways.