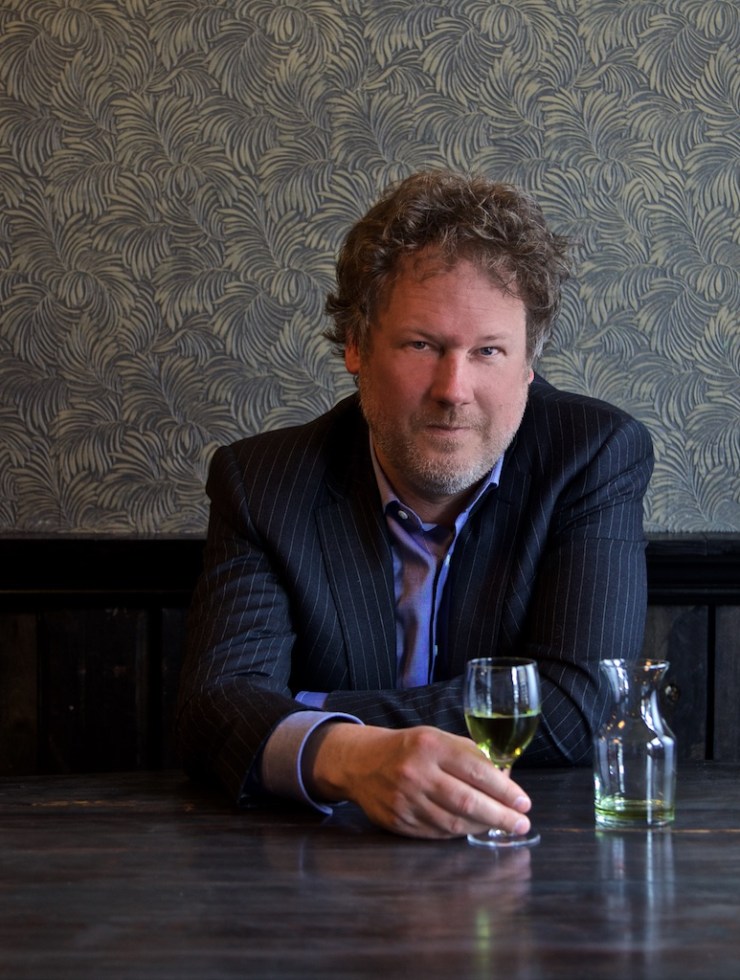 “I just want you to have a great meal,” says Jeff Gordinier, former food and drinks editor for Esquire magazine. “I do the leg work. I eat out all the time. So please, pay attention.” When he’s not travelling America or the world (the prolific writer devoted four years to shadowing chef René Redzepi of Noma for his memoir, Hungry), Gordinier spends his time at home in a village north of New York City. From James Beard-nominated Chinese cooking to hearty, soulful Filipino cuisine, his recommendations make a compelling case for travellers to venture beyond The Big Apple.

I live along the Hudson River in New York State. I’ve lived here for 20 years. I love it. The Hudson River is just humming with life, humming with history. It’s fascinating. We’re about 20 miles north of New York City. It starts getting rural quickly as you move north from the city. A lot of people don’t know that. They assume that New York City is this big, sprawling entity and that there’s an urban landscape for miles and miles in all directions. That is true of certain cities like Los Angeles, but it’s not true of New York. The city sort of just stops and then an hour north you’re in old growth forests and farmlands. There’s a lot of trees, and I’m very grateful for that. And I’m grateful because 20 years ago, none of these restaurants existed. All of them have really arrived in the last decade. I’m lucky.

“I Just Want You To Have A Great Meal”

I get very disappointed when people make mistakes regarding where they’re going to eat. It hurts me emotionally. Oftentimes I’ll receive an email from a friend saying, “Hey Jeff, you probably find this annoying, but can you recommend some restaurants in New York?” And I respond to them, “I don’t find it annoying that you’re asking me for recommendations, I only find it annoying if you don’t listen to me.” If I give someone recommendations for Italian food and find out that they went to Olive Garden in Times Square, it pains me. It causes me actual agony. I do the leg work. I eat out all the time. I have a great deal of experience with restaurants across America. I’m not the only expert, I’m not the ultimate expert, but I do know what I’m talking about for the most part. I just want you to have a great meal. So please, pay attention.

The Chinese Restaurant Everyone In The Industry Is Obsessed With

A lot of food writers live in the Hudson Valley. And they’re all obsessed with O Mandarin. If you mention it to a local chef, chances are they’re going to respond, “Oh my god, that’s my go-to.” It is the most incredible Chinese food, I would argue, between New York City and Toronto. Recently it was nominated for a James Beard award. Its primary specialty is Sichuan food. I’m obsessed with a dish called thousand-layer tofu. It is just the silkiest, creamiest tofu in a spicy sauce with slivers of pork belly. It’s unbelievable. I eat it for breakfast all the time. I’ll order two of them for delivery just so I can put one in the fridge and have it for breakfast three mornings in a row. Seriously I could eat bowls of it, buckets of it. Looking at the restaurant from the outside, people might not know how good it is. It’s in a shopping centre, just next to a supermarket. It’s not a particularly glamorous setting, but inside it’s a beautiful room. It’s a blessing to have it in this community.

I grew up in Los Angeles, which means I grew up eating Mexican food. I will confess that I can be a little bit of a snob about Mexican food. But La Chinita Poblana, a little Mexican restaurant in my village, is doing it right. It has really good salsas. That’s important. It has an incredible roast duck that’s smeared all over with a mole poblano sauce. It’s chocolatey, it’s spicy. It’s absolute indulgence to tear into this duck. I will often go in there for lunch and get some chicken enchiladas, some rice and beans and a beer, and I’m very happy. That’s my default mode. That’s my comfort zone, right there.

The Spirit and Flavours Of Hong Kong

Goosefeather is an incredible new restaurant that’s all about Hong Kong. The menu is largely based on chef Dale Talde’s interpretation of dishes you would find there. There’s an old mansion-like building on this hotel property in town and they built Goosefeather into it. So one of the cool things about this restaurant is you walk in and the dining room, so to speak, is actually several different chambers. There are little warrens of space, which I love. The food isn’t exactly traditional. On the menu right now is a dish of sweet summer corn with Goosefeather five spice barbecue sauce and brown butter labneh. I mean, doesn’t that sound awesome? There’s also charred cucumber with sesame aioli; dry-aged beef pot stickers with Chinese mustard, and unbelievable kung pao chicken wings with peanuts and ranch dressing.

My Idea of Heaven

For my wife and I, going out for a date is about getting away from the chaos of the household. The food is almost ancillary. What we’re really seeking is refuge. We’re hoping for a place that’s hushed and warm and gentle. Harper’s is that place. It’s a laid-back farm-to-table restaurant. And the one thing I really like about it is that it has a patio out back. The very phrase “patio out back” is like ambrosia to me. You walk through the restaurant and it’s like something you’d see in Spain or California; this kind of little enclosed outdoor patio. It’s quiet, there are trees. You can sit under a tree at a picnic table and get a martini and some oysters. Now that to me is heaven: alfresco martini and oysters.

Flying the Flag for Filipino Cooking

My wife, Lauren, had heard from a friend of hers in Los Angeles that there was an incredible Filipino restaurant in Nyack, which is right across the river from us. I was surprised. I said, ‘Well, God, we’ve got to go check it out.” At this point, I was coming to the end of completing the 2018 edition of my annual list of Esquire’s Best New Restaurants in America. So, my wife and I go to the restaurant, called Karenderya with our twins, who were babies at the time, and I’ve got to say, I was floored. The food was delicious, and it just had a very clear point of view. It had something to say. It had such a warm welcome, such a beautiful spirit of hospitality. Right away I was thinking, “Oh no.” I wanted to include it in my list, but I was worried; do we have time to add another restaurant? A few days later we went back with my older kids as well, Margot and Toby, and we ordered everything. We finished eating and I was like, “I’m doing it. This is a best new restaurant.” I called my editor and said, “You’ve got to make room for one more.” And we did. It was very exciting for the owners, Paolo and Cheryl. They’re such lovely people. Paolo’s dish that blows my mind is the shrimp adobo. It’s perfectly cooked — plump juicy shrimp in a creamy, sour broth of coconut milk and rice vinegar. It’s the most satisfying dish. The cassava cake is kind of similar to a crumble or a cobbler in the sense of being in between a cake and a pudding. It has a sort of crème brûlée crust on top and a fruity, custardy interior. It’s amazing.

A Restaurant (And Chef) in Touch With The Community

I think every community has at least one restaurant that is central to the social life of the community. MP Taverna is that kind of restaurant. It’s a place where people gather. It’s a place where people meet after high school graduation to have a party together. A place to celebrate anniversaries and family reunions and weddings. It’s a big, cavernous Greek restaurant with high ceilings and big tables. If you want, there’s a whole special menu where Michael Psilakis, the chef and owner, will cook an entire nose-to-tail feast based on whatever animal you choose. You could have goat or lamb or pig. It’s very earthy and rustic and delicious. It’s not fancy. Just plate after plate of roasted meat. Some days, with all these kids, I don’t have it in me to cook or do the dishes, for crying out loud. So we’ll get souvlaki from MP Taverna. Michael makes an incredible roast lemon chicken. I swear to God, I don’t know what he does. It’s magic.

I think it’s generally known that Blue Hill at Stone Barns is one of the great restaurants in the world. That it’s one of the most innovative restaurants in the world. It’s situated right on rolling hills of an organic farm, so when you drive up to it, it takes your breath away. The landscape is very striking. The phrase “farm-to-table” has become tiresome over the past few years. It’s just been overused. It becomes kind of meaningless. But Blue Hill at Stone Barns represents sort of the peak of farm-to-table thinking. A lot of the ingredients that are served at the restaurant are grown right there on the farm. They’re fermenting all sorts of ingredients. It’s similar to Noma in that respect. I think Dan Barber and René Redzepi are kindred spirits in terms of their love for nature and their obsession with flavour. I think Dan Barber is a visionary. If you blindfolded me and you served me dishes from Blue Hill at Stone Barns, I could probably identify them as such. There’s something distinct about the cooking. It’s not just the quality of ingredients. I know I sound pretentious saying this, but it’s like you can really taste the closeness to the earth in these dishes. Not that there is actual dirt in them, but you can sense how fresh everything is. You can sense the terroir.