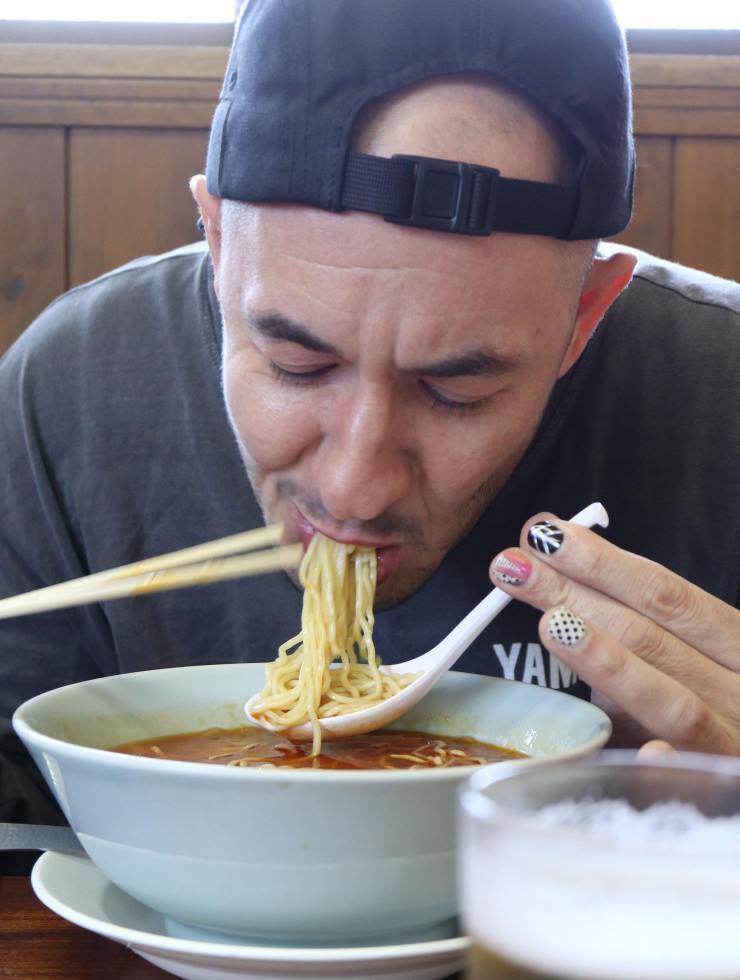 Abram Plaut is thinking about ramen right this minute. Better known by his alias Ramen Beast, this San Francisco-born, Tokyo-based food writer has spent the last 15 years exploring Japan’s myriad ramen styles and has eaten at more than 2,000 (and counting) ramen shops. He works full-time as a ramen consultant; is a global partner of Tokyo-based ramen group, Mensho; and used to file a weekly ramen column for Japanese Playboy. This is where he sends people when they ask him for noods.

Classic Shoyu Style Ramen: The shop specialty at Takano in Ebara-Nakanobu is a delicate niboshi shoyu ramen. This amazing little ramen shop is run by a husband and wife team working in tandem. The noodles are handmade from whole wheat. For each order served, the master pours the soup through a strainer full of dried niboshi (baby sardines) directly into each bowl, further infusing the broth with the natural essence and umami of the fish. A homey atmosphere meets masterful execution here — one of the best ramen experiences in Tokyo.

New School Style Ramen: Ramen Uchoku in Ogikubo opened in December 2018, and is a good example of an elite level ‘new school’ style ramen shop.  You can order shoyu based ramen or tsukemen, and the go-to bowl is the ‘Katsuo Kombu Dashi Tokusei Shoyu Tsukemen.’ The soup contains chicken, katsuo and kombu. The handmade dipping noodles come on the side in a clear kombu dashi. After finishing your noodles, you should use the remaining kombu dashi as ‘wari soup’ by pouring it into your remaining potent tsukemen soup, making it drinkable.

Yokohama IEKEI Style: Ramen Hiiki in Kamata is one of the best shops for IEKEI ramen (Yokohama style tonkotsu shoyu with rich pork bone with chicken oil) in Tokyo. The noodles are supplied by Saikai Seimen, the same as the OG IEKEI shop Yoshimuraya in Yokoyama. The pork chashu here is outstanding, customers can choose between smoked pork belly (bara) or leg (momo) chashu, with the leg (momo) being recommended.  In a past life, this shop was called Marutakaya, but it reopened in February 2018 to Ramen Hiiki.

Farm-to-Bowl Ramen: Mensho in Gokokuji is all about farm-to-bowl ramen. Adjacent to the dining area, behind glass, one can see a noodle-making room, where fresh wheat is ground into flour, blended, pounded and sliced into fresh noodles. All of the bowls here are sophisticated and well thought-out. Both ramen and tsukemen are available, with umami-rich clear soups, fresh house-made noodles and premium toppings.

Wontonmen Ramen: Tantantei in Hamadayama has been serving ramen for over 35 years, and it is known for one thing: wontonmen. The shop is an institution, having trained numerous masters who went on to establish prestigious wonton-men shops around Tokyo.  Just one shoyu-based variety of soup is served, but it’s made with a vast array of ingredients, such as saba, shiitake, konbu, niboshi, dried shrimp, pork parts, chicken parts, ox tail, and others.  Two types of wontons are served, one with meat filling and the other with shrimp. Order the “mix wontonmen” so you get to try both.

Spice Ramen: The ramen master behind Manriki (in Nishi-Kasai) apprenticed at Kikanbou, the famed spicy miso-tonkotsu shop in Kanda. As soon as you walk through the door, you’ll get a blast of the shop’s signature spices. The soup here is unforgettable. It references spicy miso ramen, but it has so many exotic flavors melded together that it’s a bowl without a genre. Red chili and Sichuan peppercorns deliver the kick, along with deep Indian curry notes. The bowl is topped off with a generous portion of cilantro. Outstanding.

Late Night Tantanmen Ramen: In Ginza, Hashigo serves late-night spicy Chinese-style tantanmen, consisting of sesame-based soup with chili oil and various seasonings. Get your bowl topped with some deep-fried sizzling curry-spiced pork cutlet (aka Paiko), or opt for a side of plump gyoza and rice. There are other Chinese dishes on the menu as well. Hashigo has a few outposts in central Tokyo, however the flagship is in Ginza. Open until 5am Mon-Fri.

Sushi Darihan (in Yoyogi) is probably my favourite go-to sushi place that I’ve been going to for years now. I don’t only go for the sushi, but for the price, and because it’s just an amazing atmosphere. It’s vibrant. It’s not your strict and serious, I’m-scared-to-make-a-mistake sushi restaurant. It almost has the feel of an izakaya; everyone that goes there just wants to have a good time, eat sushi and drink. The staff are super friendly, it’s noisy, packed-out with salary men and you can smoke inside, believe it or not.

Aozora (in Hatagaya) is another place that I’ve been going to for years. The owner, Sai-chan, moved from Mongolia to Japan about twenty-something years ago and started out as a small, five-seat counter shack serving traditional North-Chinese and Mongolian dishes. And here he is today, upgraded to a 40 seat izakaya. I mean, it’s an izakaya, but when you walk in the door, you suddenly feel like you’ve left Japan: you really feel like you’re in Mongolia or China. There’s skins and rugs hanging on the walls, and sometimes they have Live Mongolian throat singing. It’s a very unique and wild experience. They have a counter of different kinds of Chinese whisky, and a menu that’s just so interesting and delicious. It’s not Japanese, but this is the place that I always take people when they’re visiting Tokyo, and everyone always loves it.

When Food Halls Get Wild

Another place that I love taking people is Ebisu Yokocho (very centrally located in Ebisu). But you don’t go here for the food – you go here for the atmosphere. It has a really great vibe. It’s inside of a building and it’s basically a long hall that’s lined up either side with stall-after-stall of places selling booze and different types of izakaya-style pub food (things like skewers and small plates). It’s so vibrant in there, so noisy– it’s just wild. You walk in and you just get sucked into it all, and before long you’ll be sharing a drink with people you don’t know. It’s an awesome experience.

Backstreet Yakitori For The Locals

Miyazaki Shouten (in Hatagaya) is one place that’s really special to me. It’s where I met my business partner and a lot of my closest friends. This is a real local, backstreet, hidden yakitori joint serving chicken, pork and vegetable skewers. It’s small and cramped – the kind of cramped where you’re sitting on stools and your back is almost touching the person behind you. No one has ever heard of this place, but it’s packed-out every single night of the week until 4am with regular locals; and it’s just a super authentic Japanese vibe. I don’t live by there anymore, but when I did, I’d be there maybe three to four nights per week.

A two-minute walk from Shibuya crossing is a restaurant called Yakitori Daraku. They serve rare parts of the chicken (which are really, really good), but underneath the restaurant is a space where the Master (the owner of the restaurant) does a special, private yakitori omakase showcasing Japanese guinea fowl. He only does this two or three nights per week, and getting a reservation isn’t impossible, but it’s not easy either. You can only make a booking by emailing the owner directly, so you definitely have to work for it.

The Holy Grail of Yakitori (And His Apprentice)

My favourite yakitori place is perhaps considered to be the best in Japan. It’s one of those places that’s almost impossible to get into. It’s like the Sushi Saito of yakitori, more or less. It’s called Torishiki (in Meguro) and the Master is Ikegawa-san. Reservations open on the first day of each month and thousands of people try to call and book at the same time. It’s crazy. But if you can get a reservation, that’s the holy grail of yakitori places.

The good news is that they have another yakitori restaurant close by called Torikado (also in Meguro) that is run by his apprentice. This is much easier to get into – and the yakitori is also amazing. Ikegawa-san also has a third branch which is run by an apprentice, Torioka located in Roppongi.

Equally impressive is another new yakitori spot which just opened in February 2019. It is independently owned and run by a former apprentice of Ikegawa-san, master Kohei.  The place is called Eiki and is located in Ebisu.

How To Beat The “Impossible Booking”

If you’re planning on trying to get into any difficult-to-reserve restaurants, you might want to splurge and stay at a nice hotel. At most of the high-market hotels in Tokyo, the concierge services will make reservations for you, and can usually get you into the restaurants that can be tricky to book, especially for tourists. This is a tactic used by a lot of foodies who visit Tokyo.

Market Fresh Cocktails Made To Order

If you want an amazing gin & tonic – I’m talking like one of the best Gin & Tonics you’ll ever have – go to a place called Land Bar Artisan (in Shimbashi). It’s underground with only six seats, and just one bartender. On the bar he’ll have two or three types of fruit that he’s bought earlier that day at the market, and that’s what he’ll use to make the day’s cocktails; it’s insanely seasonal. One time he made me a Bloody Mary out of tomatoes that he chopped up right there in front of me. And his Gin & Tonics are honestly the best I’ve ever had.

Another bar that’s super interesting is called Bar Triad in the Shibuya district. It’s like a Japanese speakeasy. You take a tiny elevator up to the bar and it just has this super cool vibe. And they make really interesting cocktails. When friends are in town, this is where I take them for a drink after dinner: and they always really like it. The owners of this bar own a few others in the Ebisu neighbourhood, and all of them cool and worth checking out: Bar Track, Bar Tram and Bar Trench.

I think Watering Hole is the best craft beer bar in Japan. The craft beer scene is really picking up in Japan. I kind of compare the craft beer scene in Japan to the ramen scene in America; people are super interested in it, and places are opening up left and right, but overall, the quality still needs improvement. In saying that, the Watering Hole is an amazing craft beer bar. The have close relationships with special breweries, and they stock beer that you can’t get anywhere else in the country. They have a lot of international beers on tap too.