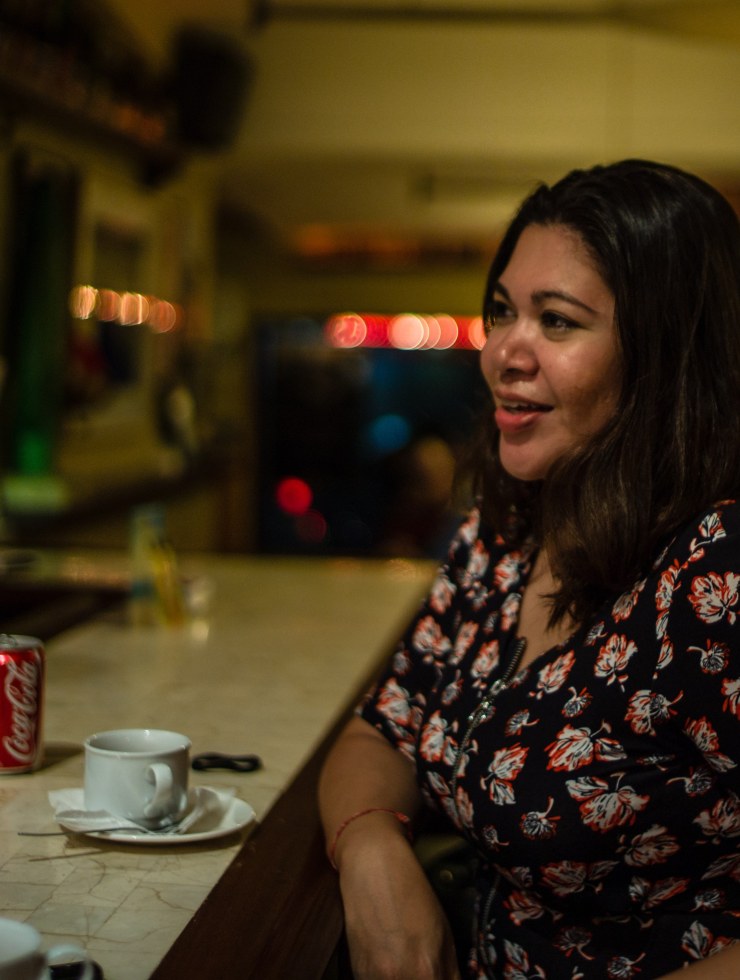 “Do not expect privacy,” says Manila-based food and travel writer, Shirin Bhandari. “Manila is the most densely populated city in the world and close to 13 million people are squeezed into this metropolis.” What you can expect, according to the journalist whose work appears in Roads & Kingdoms, Anthony Bourdain’s Parts Unknown, CNN and VICE, is plenty of energy, eating and a bold mix of Spanish, Chinese and American flavours. The capital – and food – of the Philippines awaits.

Do not expect privacy. Manila is the most densely populated city in the world, with close to 13 million people squeezed into this metropolis. Getting around won’t be easy, so plan your stay. Keep South, between the cities of Manila, Pasay,  Makati and Taguig where most of the action happens. Metro Manila is constantly changing with the times, with an unnerving number of shopping centres and condominiums. Unfortunately, the working class can’t afford to live in an average flat so thousands of units remain empty. I suggest getting your own apartment for a few days. Renting an apartment is cheaper than a hotel – most include a kitchen, pool, and gym and are invariably connected to a large shopping centre. Each brave, new, air-conditioned mall functions as an escape from the heat and bustle outside. The pandemic has set about lengthy lockdowns in the city and forced many restaurants to shut down over the past two years. But Manila has finally opened up and locals are encouraged to be vaccinated and maintain social distancing – so take full advantage of the al fresco dining, rooftop bars, and weekend markets like Salcedo.

How The Locals Do Breakfast

The Philippine breakfast known as silog has three components: a salty, cured meat, fried rice and a fried egg. Silog is the portmanteau of the words sinangag (fried rice) and itlog (egg). Not everyone can function on such a high-carb, high-protein, oil-infused breakfast, but if you’ve lived here long enough it’s a great, quick, go-to meal any time of day. The menu at Café Adriatico in Malate might be as old as the Dead Sea scrolls, but it is there for a reason. It’s my go-to place for a consistent and comforting Filipino breakfast. The Farmer’s Breakfast or tosilog consists of tocino (fried sweet pork similar to the Chinese-style char siu), garlic fried rice, a sunny-side-up egg with a refreshing tomato and coriander salad and a banana fritter for dessert. It also comes with a free cup of strong barako coffee!

During the week, a trip to the world’s oldest Chinatown in the neighbourhood of Binondo is a must. Binondo was established in 1594 by Spanish colonisers to keep the Chinese immigrants in check. Start along Ongpin street and order the special Chinese spring rolls of New Eastern Garden Restaurant and the Shanghai-style fried siopao or pork buns served fast, fresh and cheap. Bring your own shopping bag to fill with the mouth-watering pastries of Eng Bee Tin which has multiple branches across downtown. Pick up a Chinatown map so you won’t get lost scouring the streets for a blend of tasty Chinoy (Chinese-Filipino) staples.

The Best Market In Manila

The Farmers’ Market in Cubao is hands-down the best market in the whole metropolis. Even chefs would agree. Bustling with people day and night, it offers fresh vegetables sourced from the north and amazing seafood from the south of the Philippines. The Dampa is a section inside the market which allows food to be freshly cooked on the spot. Hand them a kilo of mud crabs and they can deep fry it with obscene amounts of garlic and fresh chilli or pick up some freshly sliced tuna sashimi! Also, do not underestimate the Philippine one-pot wonder, sinigang. The northern Tagalog soup is tamarind-based and a more refined version of the swampy tom yum of Thailand. The sour and savoury soup is addictive and can be made at the Dampa Cubao. A choice of fish or prawns and a mixture of local vegetables like water spinach, okra, string beans, and radish can be thrown into the soup. Some even substitute tamarind with miso, watermelon, or fresh guavas. To be safe, make sure to bring a local.

Fried or grilled chicken is popular all over the country, from fast-food joints like Jollibee to home-style barbecue chicken once served to wartime GIs at The Aristocrat. But there is only one master: the underrated chicken inasal of Aida’s Chicken. Inasal is chicken marinated in a mixture of calamansi lime soy, vinegar, garlic and annatto, and grilled over hot coals. It originated from the Negros region in the Visayas, south of the Philippines. Aida’s main branch is in Bacolod but Manila has been blessed with one stall inside Makati Cinema Square. The owner, the late Toto Tarossa is a close friend. The colourful walls and paintings in Toto’s restaurant reflect his love for local artists. His family has been making tender and tasty chicken for over 40 years. Choose from pecho (breast), paa (leg) or pakpak (wings). It is served with a cup of rice and a battalion of condiments. The bottle of red oil on the table is infused with garlic and annatto and meant to flavour your rice. The chicken is ideally dipped in sinamak: local palm vinegar with bird’s eye chilies. Order kansi – beef shank with bone marrow and green jackfruit. It is stewed in a sour broth made from batwan, an indigenous fruit from the islands.

The National Dish (That Differs From Island To Island)

Adobo is the national dish. This protein-based dish uses meat, seafood or vegetables and is braised in vinegar. Depending on the tide, the Philippines is home to more than 7,100 islands and each island offers a different recipe. Meat can be broiled or even fried in the process. Some use more garlic than others. Some add coconut milk to the stew with bird’s eye chilli for an extra kick. Whichever recipe one chooses, it will always be a source of comfort, great joy or contention.

As the sun sets in Manila, traffic will be the biggest dilemma in this megacity, so dining is relative to where you are. If you find yourself stuck in a mall, (which is normal), find the nearest Crisostomo or Manam for a sampling of pork adobo. In Makati, head to MilkyWay Cafe for traditional Filipino comfort food. The kare-kare or oxtail in peanut sauce here is award-winning.  If you’d like to splurge, book a reservation at Asia’s 50 Best Restaurants Toyo Eatery at Karrivin Plaza and make time to visit contemporary galleries like The Drawing Room, Art Informal and a design concept store Aphro next door. The Toyo Eatery is the brainchild of Chef Jordy Navarra, who has a creative take on Filipino food that fuses “familiar food traditions with modern presentations”. Hop to Poblacion and visit trendy haunts like Agimat Foraging and Kitchen Bar and Alamat for a sampling of tasty pulutan or “pick-up” snacks paired with uniquely crafted local liquor-infused cocktails, or head for rooftop drinks at Z Hostel that offers spectacular views of the central business district of Makati.

On the grittier side of town, where I lived for close to a decade, is Bistro Remedios in Malate. It is right across Café Adriatico, my favourite breakfast spot I mentioned earlier. Both Bistro Remedios and Café Adriatico are owned by the late Larry Cruz, a pioneer in the Filipino restaurant scene. The homey cooking is unpretentious and tasty, like something your grandmother would make for you on a Sunday.  Do not leave without a taste of the Knockout Knuckles or crisp pata bawang , laing (taro leaves with coconut) and the steamed rice in bamboo. The heart-clogging whole leg of pork is deep-fried with garlic and chilli. It is cited by well-known food writer Madhur Jaffrey as the best pork knuckle dish she has tasted in the Philippines. Cleanse that palate with halo-halo which literally means “mixed together”. It’s a festive dessert of shaved ice topped with candied fruit, sugar beans, tapioca, jelly, evaporated milk, or purple taro ice cream. The idea is to mix everything up into an unrecognisable slush before eating.

Where To Drink In Manila

Cross to the walled city of Intramuros in the old district of Manila and visit its famous Spanish-era parks and churches which have received a much-needed upgrade. End the day with Manila’s famous sunset with cocktails on the sky deck of the Bayleaf hotel that offers a phenomenal unobstructed view of the city, the sea and surrounding neo-classical style buildings that can’t be found anywhere else, while you still can. End the night with drinks at the community bar, The Oarhouse Pub of Manila. It is a melting pot of writers, artists, photographers and journalists and featured in Anthony Boudain’s Parts Unknown. It is owned by retired photojournalist Ben Razon, a long-time friend from the famous Razon family of Pampanga. For midnight munchies, ask for the sisig which also originated in Pampanga: finely chopped pigs’ heads served on a sizzling platter with chilli and onions. De-clog with the rocket fuel Super Sub, a fiery concoction only found in Malate. It consists of extra strong beer spiked with a local moonshine called lambanog.

It may be hot, but beer is cheap. The greatest legacy the Spanish left the Philippines was the introduction of beer. In 1890, a company of Spaniards opened the first brewery in Southeast Asia, in Manila. The San Miguel factory created various types of beer and has remained the top-selling brewery in the country to this day. One US Dollar buys you a bottle. The Spanish’s second-best contribution is rum. It was introduced to the Philippines in the 19th century and the abundance of sugar cane here makes it an ideal place to produce the amber spirit. Don’t forget to pick up a bottle of Tanduay, Old Captain and the higher-end Don Papa: they make great gifts.