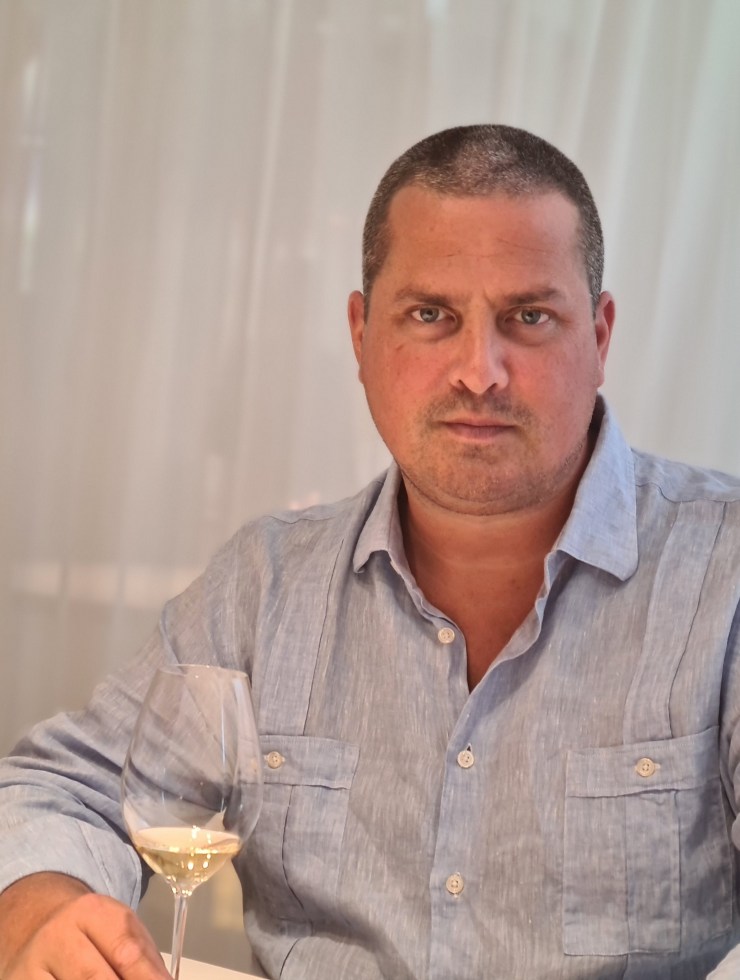 Borja Beneyto doesn’t like the title of “food critic”. Instead, he prefers to be called a “commentator” and spends his days spreading – and communicating – his love of good eating and drinking. A member of the Royal Spanish Academy of Gastronomy, Madrid-based Beneyto founded the influential food blog Cuaderno Matoses and contributes to titles such as Conde Nast Traveller, CNN and Spanish newspaper, El Mundo.

Sacha is a very small, produce-drive neighbourhood restaurant named after chef Sacha Hormaechea. The restaurant is Sacha’s home and he cares about his guests. His cooking is very simple and very straight and the menu changes depending on the season. One of his most famous dishes is the fake sea urchin lasagne (spider crab ravioli seasoned with sea urchin and a touch of hot jalapeno oil) but all the dishes show his creativity in integrating all of the ingredients: the seafood, the fish, the meat, the vegetables.

Tasquita de Enfrente is also a very small, neighbourhood restaurant in the centre of Madrid. It’s also produce-based but a bit more radical. It’s radical in terms of the quality of the ingredients. It’s radical in terms of the seasonality. And it’s really radical in terms of working with produce and producers around Spain. The style of the dishes is very naked and very straight and the cooking highlights the produce. Textures are very, very important. One of the dishes served is eel with a very tiny slice of apple or pear. The eel is the highest quality available and it’s grilled very simply. Its meatiness and fattiness is contrasted against the freshness and crunch of the apple. The saltiness, the sweetness: it’s amazing.

La Buena Vida is another small, seasonal, produce-based neighbourhood restaurant, but more academic in the way the chefs cook. They are also game specialists. In Spain, we hunt a lot of birds: woodcock, grouse, partridges. A lot of different birds. We also hunt deer and wild boar and other big animals. During the hunting season, you see a lot of these on the menu. It’s comfort food but with slowly cooked, very deep sauces based on French and Basque recipes. The restaurant is very relaxed but the dishes are very sophisticated – not in terms of creativity, but in terms of the produce and the way they’re cooked. All of the selections are very personal. Carlos Torres is the chef and Elisa Rodriguez is the sommelier and restaurant manager. She loves Burgundy and there are wines from Burgundy, Champagne and Rhone: perfect for the style of cooking here.

One Of Spain’s Best Seafood Restaurants

I think El Señor Martín is one of the best seafood restaurants in Spain. The chefs cook fish from all over Spain and everything is cooked over coals. Each day there will be between 15 and 20 different kinds of fish available. When guests share a big fish, the chefs will carve the fish into different cuts. It’s quite unusual to be served 20, 30 different cuts of the one fish. They use the entire animal. There’s also different shellfish. During red shrimp season, they will offer five different types of red shrimp caught from five different coasts in Spain, so you can compare the shrimps’ different flavours and textures. The restaurant has two spaces with two different experiences. Downstairs, it’s more fine dining and upstairs is a very sophisticated bar where you can watch the chefs cook the fish and have your food served to you directly from the coals.

Taberna Laredo is also produce-based and probably has the best cellar in Madrid. While the amazing wooden cellar has hundreds of Spanish wines, the restaurant specialises in French wine and has wines that are difficult to find even in France. The restaurant is separated into the bar and dining room, but it’s not like a classic taberna (pub). It serves great fish, great meats and Spanish tapas. One of their hits is the rabbit ribs. They’re very, very tiny and breaded before being fried. It’s really delicious and not that common in Spain. My favourite thing to eat, however, is probably the jamon Iberico. I mean, there’s nothing better than that.

Cuenllas is a very traditional, classical neighbourhood place run by the Cuenllas family and it has one of the best wine lists in not only Madrid, but Spain. The wine is from around the world and includes well-known labels as well as difficult-to-find wines. The food is very rustic, homestyle, mother’s cooking. Things like risotto with truffle and oxtail casserole which is a very traditional Madrid dish. The house terrine and fried lamb ribs are also amazing. There’s also a huge, amazing collection of European cheese that includes cheese from France, the UK and Holland. Not many people know about this restaurant and it’s not the sort of place that’s often seen on international lists, but when people ask me where to go in Madrid, this is what they expect. These kinds of places aren’t the most well-known, but in terms of authenticity, produce and honesty, these are often the best restaurants.

There aren’t great modernist or molecular restaurants in Madrid like there are in Barcelona and Catalonia but DiverXO is a good example of contemporary international cuisine. It’s an amazing and unforgettable rollercoaster. It has three Michelin stars and it’s a very powerful, incredible experience in terms of the place and the wines, but especially because of the creativity of the dishes. It’s like a mixture between Spain and different trends from Asia. There’s a lot of places around the world that do pan-Asian food, but this one is amazing. It’s a mix of ingredients, some come directly from Asia, others are made here in Spain. The chef is David Munoz. He’s only 39 and started cooking when he was 14 years old. He is, for me, one of the best chefs in Europe. His place is quite hard to get a reservation and you have to book around three months in advance.

Kabuki Wellington is a Japanese restaurant, but the Spanish influence is more obvious than at DiverXO. Ricardo Sanz, the chef, is one of the pioneers of crossbreeding Spanish and Japanese cooking. You’ll find very Spanish recipes or hints of specific Spanish recipes, but made with Japanese ingredients, and also the other way around. And it makes sense. In Spain you have some of the best seafood in the world. The restaurant is very restrained in terms of decorations and the atmosphere is very subdued and quiet. The wine list is amazing and there’s plenty of Spanish and other European wines including German riesling that is very good with Japanese food. There’s also an amazing sake list with limited edition bottles. 99 KO Sushi Bar is the new kid on the block that has been open for about a year and is also Japanese. This is more omakase-style and it’s just a bar with 14 seats around the chef. The produce is the highest quality and there are some Spanish influences, but it’s very purist. There’s also a great wine list with Spanish and French wines with 20 to 30 champagnes.

Punto MX is probably the best Mexican restaurant outside of Mexico. It has one Michelin star and is like fine-dining Mexican cuisine. The chef Roberto Ruiz gets a lot of ingredients from Mexico, but there’s also an eco-farm outside of Madrid that grows vegetables sustainably. It serves a tasting menu that changes every season.

Three of My Favourite Cocktail Bars

Santos y Desamparados, which translates to “saints and the helpless”, is a very obscure bar with a very obscure aesthetic. It does classics like the Penicillin well but can do anything. It’s very small and intimate. Viva Madrid used to be a very classic aperitif bar in Madrid. Diego Cabrera, who is probably the best-known bartender in Madrid, just refurbished it and will be mixing contemporary and classic drinks. It’s kind of integrating old and new Madrid. Salmon Guru is also owned by Diego Cabrera, but is a more contemporary bar that’s on the World’s 50 Best Bars list. It serves creative drinks but it’s not a big, grand bar: it’s more of a mix between the sophisticated and the underground.