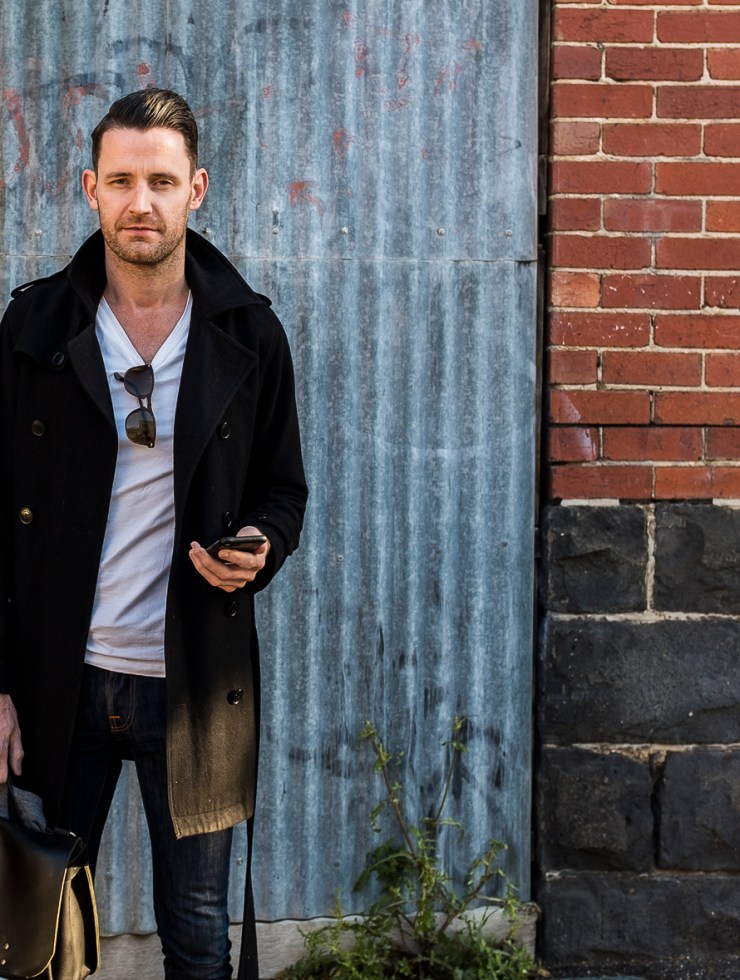 White-tablecloth French dining? Real-deal ramen? Bars that are a destination in their own right? If it has to do with eating and drinking in Brisbane, Matt Shea is across it. A prolific journalist who covers the Queensland capital and destinations beyond for titles that include Broadsheet, QANTAS Spirit of Australia and Tiger Tales, his finger is never far from the city’s pulse. This is how he likes to tackle the town he calls home.

If there’s a style of cooking where Brisbane punches above its weight, it’s Italian. We’ve got a great collection of Italian restaurants. A long-time Teneriffe and Brisbane favourite is Beccofino. It’s just great in every little way. It never misses a beat. I think that has a lot to do with Cordell (Khoury), the chef there. When it first opened it was known for its pizza, but it’s the pasta and the main dishes that really shine these days. The classic Beccos story is that back in the day, Cordell tried to take the duck ragu off the menu. The response was basically a mini revolt among the restaurant’s regulars. After your meal, head around the corner to La Macelleria Gelateria for some of the best gelato in Brisbane. It has a really nice neighbourhood vibe and feel.

A Different Kind of Powerhouse

Bar Alto at Brisbane Powerhouse (a repurposed tram power station and one of our best theatre and arts venues) is another amazing Italian restaurant. It’s incredibly underrated and has an outside deck that sits on the river, so it’s a really nice way to spend a beautiful summer evening.

Brothers Are Doing It For Themselves (And Eaters)

I love to take people to Happy Boy. It just does a whole lot of things really well: really good service, the pricing is really good, the dishes are unusual and not too trend-driven. I sometimes think owners (and siblings) Cameron and Jordy Votan don’t give themselves enough credit for how legit some of their meals are. Their Emperor’s breakfast – a prawn (shrimp) omelette – is probably my favourite dish in Brisbane. Most omelettes that you get in Brisbane are cooked firm and are pretty subpar, but this is just amazing: a beautiful, simple omelette, soft-cooked so it hangs on to a lot of moisture. Jordy was telling me that this used to be a staff meal and it was so good that they started putting it on the menu. The Votans have also opened Snack Man, a small-plate centric wine and cocktail bar next door to Happy Boy, which is just as great. Both have brilliant wine lists too: Happy Boy leans towards small-batch Australian low-intervention wine, while Snack Man focuses on European regions. Also, Snack Man regularly hosts some fabulous winemaker events, which are always a great time.

Another favourite dish in Brisbane would have to be tonkotsu ramen at Taro’s Ramen. Brisbane has a heap of great ramen joints – it’s another thing we punch above our weight in – but Taro’s stands out because it uses Bangalow pork which creates a really rich broth. When you find the dust of the pork bones in the bottom of the bowl, you know you’ve had a legit broth. And of course, the noodles are hand-prepped and the egg is perfectly cooked. Make sure you order a side of the house-made gyozas: they’re really, really good.

“The Ultimate Occasion Restaurant But Not Stuffy At All”

Another restaurant leading the seafood charge is Otto. The menu is inspired by the Amalfi Coast and leans hard into pasta, but chef Will Cowper gets really good, sustainable seafood like line-caught fish from a guy called Chris Bolton up in the Whitsundays, and mahi-mahi from North Queensland. The dining room is so beautiful. It’s the ultimate occasion restaurant but not stuffy at all. It’s really well pitched for Brisbane.

A more unusual restaurant that really blew me away recently is Restaurant Dan Arnold. It’s high-quality, amazing French-influenced cooking using local ingredients. Stuff like slow-roasted Brisbane Valley quail served with pumpkin, black garlic purée and young leeks. I wrote in my notes “restraint on a plate”. It’s this exercise of getting out of the way of the produce. And the value is spectacular. Whether you select the three- or five-course menu, you get all of these extra courses: amuse-bouche, appetizers, palate cleansers. It’s insane. They keep coming out and saying, “Oh, here’s something else.”

The Best French Restaurant In Australia?

South Brisbane’s Maeve Wine Bar is a French-style wine bar upstairs in a two-storey heritage building. The food is fantastic classic French bistro-style dishes and bloody cheap for what it is. They’ve got a really great list of wines with a lot of European, European-style and Australian and New World wines. Those guys are just so hospitality-focused. They really look after you. They’re open late too, which is something you don’t often find in Brisbane. Just around the corner from Maeve is one of my favourite bars, Maker. Super impressive and innovative cocktails, and again, just so service-focused. It’s a great little spot, I’ll often roll through after dinner for a sneaky beverage before cruising home.

Clever Cooking (With A Touch Of SAS)

Detour is a really good restaurant in inner-city suburb Woolloongabba. The menu is broken down into omnivore and herbivore sections. It’s really clever cooking from chef-patron Damon Amos. A lot of his cooking techniques actually came from an old SAS survival handbook: stuff like peppering things with gunpowder. The Kentucky Fried Duck – KFD, as it’s known locally – that’s a big one of his. It’s a couple of pieces of duck brined overnight, crisp-fried, and served with gluten-free jalapeño corn-bread and sour cream. It’s pretty special and references his mother’s cooking when he was a kid. Damon is one of those great chefs who cooks from the heart.

You need to talk about suburban restaurants when you talk about Brisbane. The further out from the city you go, the more legit it gets. Sunnybank is the biggest centre, about 20 minutes south of the city. In the ‘80s a lot of Taiwanese families came and settled under a Queensland government incentive scheme. The Taiwanese were followed by Koreans, and then people from Malaysia, Singapore and Vietnam, and then mainland Chinese. So over time it’s become more and more legit. You’ve got places like Golden Dumpling. It’s a pretty new joint, and to look at it’s nothing special, but it does amazing fried dumplings with “wings”, or fresh fish dumplings in a chilli broth. But there are loads of great dining options in Sunnybank – it’s almost pointless calling out just one.

For the best Vietnamese, head 20 minutes west of Sunnybank to Inala. Twenty-four percent of Inala’s population is Vietnamese or of Vietnamese ancestry, which is huge. It has a really nice vibe, and really great pho restaurants like Pho An. Their pho is amazing – a really clear broth, super tasty, super clean and they serve it up with fistfuls of fresh herbs. One of my missions in Brisbane is to find really good char kway teow. It’s hard because it’s often cooked on the wrong kinds of woks. One spot that does a really great bowl is a spot out in Sherwood called Noodle World. If I want char kway teow, that’s where I go. The chef has these real kick-ass wok burners there, so he can get enough heat into his noodles to char them and really give it that smoky, BBQ taste.

Where Locals Go On A Sunny Sunday Afternoon

Felon’s, the brew-pub at Howard Smith Wharves, is a great Sunday session spot. It gets super hectic down there, I’m not going to lie – if you’re agoraphobic you’re not going to enjoy it – but it’s also really big so you can always find space. It’s enormous. The shed is heritage listed – a really stunning venue. Green Beacon is another great brew-pub for a bunch of beers on a lazy afternoon. Sitting there on a Sunday with that roller door up, the light reflecting off the brick warehouses opposite, and a bit of a breeze blowing up the street – it’s just perfect. It’s also a bit of a local go-to on a Wednesday night when King of the Wings park their food truck out front. That’s such an amazing combination.

A weird thing about Brisbane is it’s the earliest city to rise in the world. It’s a real morning city, and so a real breakfast city. Again, it punches above its weight here. King Arthur Café is one of these typical “breakfast restaurant” cafes that are popular in Australia right now. It’s in an old Nissen hut, which really speaks to the history of Brisbane. The menu changes all the time — I don’t think I’ve ever had the same thing twice, but there’s always a really great bacon and egg roll up for grabs. It’s definitely my favourite breakfast spot in Brisbane, and when I have friends or colleagues visiting town we always end up back here. Going back to the burbs, another great breakfast location is a cafe in a Camp Hill Queenslander-style corner shop called Florence. You go there, meet some mates for breakfast, and again it has a great community vibe. We’re lucky in Australia that pretty much everyone can do a decent coffee, but to find places that smash it out of the park can be tricky – especially breakfast places. Florence, King Arthur and another spot called Penny Coffee Co are all really good. Penny is on Annerley Road, in an old Fujifilm lab so it has a cool bit of history to it.

Where To Go In Fortitude Valley

If somebody reading this is coming to Brisbane, chances are, at some point you’re going to find yourself in Fortitude Valley, the city’s major entertainment precinct. There are a lot of bars, and it can get pretty gnarly, but the real stand-out for me is Savile Row. It’s this tiny little speakeasy that has five different levels that twist around the central bar and a big beautiful chandelier. The owners also have a second bar across the road called Finney Isles. Hello Gorgeous is a really beautiful, summer-time Brisbane venue that’s the perfect spot for a Sunday session. The owners have put a lot of effort into the food menu, and have also turned towards lower-alcohol offerings (so you’ll find Seedlip and a lot or aperitifs). It’s a really cool venue, and another little step in the evolution in Brisbane bars.