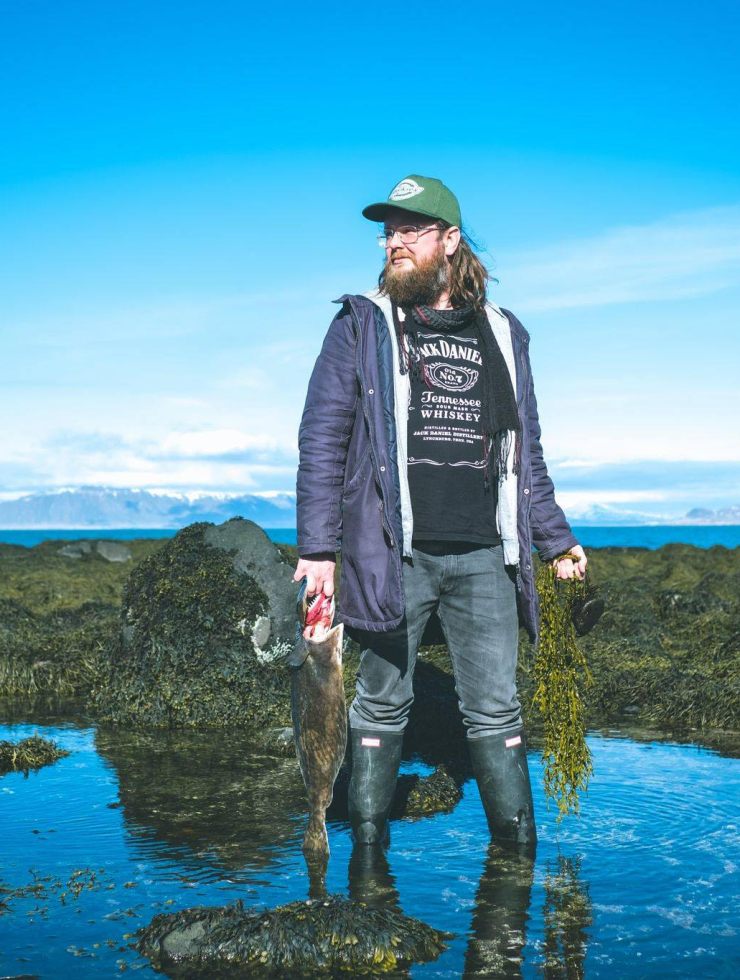 In a past life, Ragnar Eiriksson was at the helm of Dill, Iceland’s first Michelin-starred restaurant and an operation that zeroed in on the obscure ingredients and food traditions of North Iceland. Today, his focus is on his small Reykjavik wine bar Vinstukan, his high-end seafood bistro Brút and his tiny specialty coffee shop Ó-le next-door. When he’s not running these spots, these are the places you’ll find Eiriksson in the Icelandic capital.

Northern Italian restaurant La Primavera is one of the city’s greatest comeback stories. It originally opened in 1993 in Reykjavik’s House of Commerce but closed in 2011. Then, in 2018 after a brief and very successful pop-up, the restaurant decided to return and reopened on its 25th anniversary. The restaurant is inside the Marshall House by the harbour which is almost in the middle of nowhere, yet you’ll always find it busy, day and night. The small menu of regional Italian dishes also seems like it’s returned from the 90s and includes classics like veal Milanese and a creamy tomato fettuccine with beautiful local langoustines.

Sümac is a fun and lively restaurant cooking North African and Lebanese dishes using Icelandic ingredients. My girlfriend is a vegetarian, so we usually head here on date night for great vegetable dishes like baked cauliflower with pomegranate and almonds; or grilled oyster mushrooms with ras el hanout.

The City’s Hottest Place To Dine

Óx – a restaurant-within-a-restaurant – is the hottest place to eat in Reykjavik right now. It’s a completely unique experience and if I had to put my money on it, I’d say it will be the next in the city to receive a Michelin star. The 11-seat counter restaurant wraps around an open kitchen and sits in the back of Sümac. Because all 11 guests start their tasting menu at the same time, the chefs can create dishes to be shared and encourage interaction: like a whole saddle of lamb served with indigenous herbs or whole-grilled monkfish with a creamy birch and mussel sauce. Dishes like lumpfish roe with cultured cream on thin pancakes are evidence of Icelandic cooking traditions at play, but the moist lava-baked rye bread that’s steamed in milk cartons for 24 hours proves that there’s really no other restaurant quite like Óx. I heard a rumour that they are moving to their own location.

Where the Burgers Are Better

Hagavagnin is a burger must-try. It’s set in west Reykjavik next to one of its geothermal public pools and serves a soft potato bread bun with a fatty, juicy burger patty, caramelised onions and yellow mustard. What else could you want in a burger? Burger spot Tommi’s is a long-time favourite. It was around in the 80s but re-opened a few years ago and has now exploded onto the international scene with locations in Copenhagen and London. The original is here in Reykjavik.

Bakery by Day, Pizzeria by Night

BakaBaka is a brilliant new concept that opened recently: bakery by day, pizzeria by night. It serves wonderful sourdough, rye bread and a variation of sweet pastries – the square doughnuts are dangerously good. After 5pm it morphs into a Neapolitan-style pizzeria with a nice selection of natural wines.

Have a Chat With the Locals

For a super local experience, go to Kaffivagnin, a coffeehouse by the harbour where the old fishermen meet up in the morning to talk about the weather and pretty much everything else. It’s been there for at least 50 years, and somehow it’s still the same.

Local Cuisine With a Twist

At Skál! the food is simple but full of flavour. It serves a beef tartare dressed with a local cold-pressed rapeseed oil that is a favourite with a glass of a naturally fermented gamay from Beaujolais. It’s also in a cool spot inside the Hlemmur food hall that was built in the 60s and served as a bus terminal for many decades. It’s definitely the city’s best place to go people watching.

Look for My Man Siggi in the Yellow-Overalls

When industry friends come to visit, I take them to the Kolaportid fleamarket (it’s open weekends from 11:00-17:00). I also go there frequently to scout for vintage LPs. There is a food market inside with all sorts of weird traditional food, and the producers are usually more than happy to give curious visitors a little taste. Look for my man Siggi from Depla, he is usually found in the central booth wearing yellow overalls, and he is happy to share his stash of fermented shark and whale blubber. It’s only for the brave. I’m afraid it’s too much for me.

A Food Hall Fit for a Family Outing

Another great food hall is Grandi, located by the old harbour with loads of nice places to eat (Korean street-food stall KORE being my favourite). If I am in the area for a little Sunday outing with the family, we find ourselves often sitting in there for a while since it’s kid-friendly.

Mat Bar is a lovely little owner-operated bar serving tapas, wine and amazing cocktails. The menu changes quite frequently, but I always start with the flatbread that is cooked over open fire – it’s awesome. Then I just let them take charge and send me what they want, and it’s always good. I like being handed rows of food and drinks, and since I am basically a glutton with an attention deficit disorder, I like not having to think about food for a couple of hours after a busy week. Their kitchen is open until 11pm, so it’s also a great spot for a late-night snack.

The Best Bars in Reykjavik

Vitabar serve burgers that, admittedly are probably not the best in town, but I absolutely love the place for how much of a dive it is. Session Craft Bar is my favourite place for craft beer. Refreshingly, it looks more like an 80’s discotheque more than your usual geeky beer-bar. However, if a beer geek’s paradise is what you’re looking for, then visit RVK Brewing: a little brewery with a tiny taproom located behind a car dealership. I usually head to Vedur for late night cocktails.

Come and Say Hi at My Natural Wine Bar

My friend Oli (a sommelier) and I opened Vinstukan, a wine bar in downtown Reykjavik. In a selfish way, it’s a bar designed to be exactly the kind of bar we would like to go to ourselves. The wine list has a big emphasis on natural wine and wines from smaller producers, but not exclusively. There are only three small importers of natural wine in Iceland. It’s a total car park operation. They only import between 60 and 120 bottles of each wine, so we rotate our glass list weekly. Almost all of it changes each week. The food is simple: small plates served fast and full of flavour like cured cod with black garlic mayonnaise and olives. One of the more popular dishes is a local cheese called tindur – an 18-month cow’s milk cheese that has a very similar taste and texture to Comte – that we serve with brown butter and hazelnuts.

Me and the team behind our little wine bar have been keeping quite busy: we have now opened Brút, a high-end seafood bistro in a beautiful building in downtown Reykjavik, build in 1919 by Iceland’s first shipping company. We also have a tiny cafe on the other end of the same building called Ó-le, where we serve speciality coffee roasted by a local coffee roaster.

Suited for a Duran Duran Afterparty

My friends who are behind Session Craft Bar have branched out and opened a kind-of-hidden bar with their own line of Vermouth, in house made cocktails on draft and a small selection of the freshest craft beers around. Stereo Bar is small and intimate, with decoration suited for a Duran Duran afterparty. Ask for the Italian trio (a shot of Fernet Branca, Negroni with house-made vermouth and a pint of Peroni) and admire a 30-year-old confirmation picture of yours truly that hangs behind the bar.

Everyone has been raving about Makake, a fairly new dim sum and Japanese tapas bar in an old sailor’s canteen. The menu is mostly handmade dumplings, but the small plates like braised daikon with red butter miso sauce are really exciting. The tables are made of beer crates and the lights feature repurposed Bundaberg ginger beer bottles. It really helps to create the feeling of a Japanese izakaya.

Located in the same spot where a place called MB Taqueria stood Dragon Dim Sum is a collaboration between the people behind Makake and Mat Bar. Originally started as a pop-up, it is now a permanent thing is this really cool space.

Another Pop-Up Turned Brick and Mortar

Kastrup is a Danish open-faced sandwich restaurant that has been bouncing around town as a pop-up for the past couple of years. It now finally has a permanent location and is very popular with the locals for lunch.