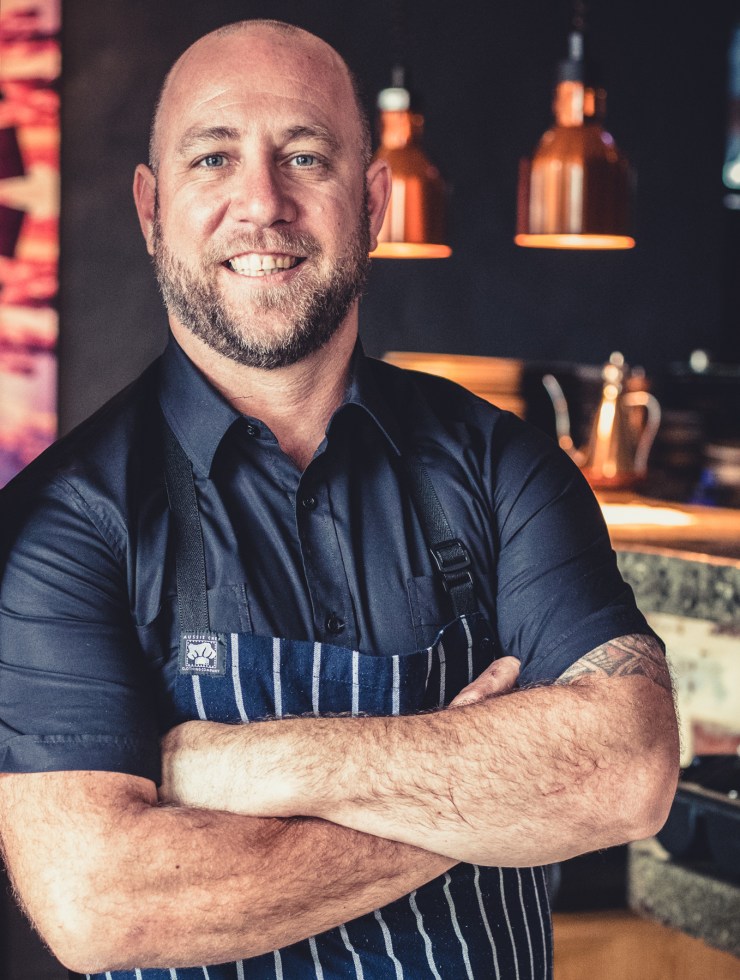 Widely regarded as one of the good guys in Perth’s restaurant scene, Kenny McHardy is the chef at Manuka Woodfire Kitchen, an intimate wood-fire restaurant he and wife Jody opened in 2015. Just as McHardy is a fierce advocate for local produce and producers, he’s equally passionate about celebrating the eateries that make up Perth’s diverse dining landscape, in particular, places in and around Fremantle where he spends time with his young family.

Rise and Shine the Japanese Way

A few years ago, this sandwich cafe Cocolico down the road from Manuka was bought by this Japanese pastry chef, Tomo. Once a month, she started doing these Japanese breakfasts where she offered homestyle dishes like soba noodle, Japanese curry and a tamago omelette. It was amazing and laid the foundation for Hinata Cafe. She was really passionate but lacked confidence in her cooking and was worried about how her food was going to be perceived. But I was like, “man, your food’s killer”. It’s really healthy and gluten-free. Whenever I did Saturday lunch service at Manuka, I always used to go down to her cafe, but in February she moved Hinata into its own space elsewhere in Fremantle.

My ultimate restaurant in Perth would hands-down be Viet Hoa on William Street. I’ve been eating here since 2006 after some friends put me onto it. It’s there for me whenever I need a big bowl of noodle soup, lunch or dinner, seven days a week. The seafood laksa is my go-to – I think it’s number 24 on the menu – as well as the stuffed chicken wings. They’re killer. There’s just so much flavour. I think the restaurant has been open for around 20 years and I don’t think the owner has left the pass once. I always go up and say thank you: so much flavour, consistency and love has gone into that menu. They must punch out a thousand bowls of soup a day, I reckon. They’re always busy. Whether I’m there on a Monday lunch or a Friday dinner, the same volume of traffic comes through that place. This used to be date night for my wife Jody and I, now it’s where we take the kids to at night. It ticks a lot of boxes.

Breakfast in the Suburbs (With a Touch of Italy)

After Jody and I take the kids to school, we usually go to Cheeky Boy Espresso. It’s solid and my favourite place to go for breakfast. It’s owned by Anna [former maître d at South Perth fine diner In Contro] and Trevor Watts and you can tell it’s a tight ship. The food and service are always good and the coffee is great. It’s a little bit Italian. I get the Italian sausage and beans on toast which has this tomato and chilli jam that’s made in house. They just think about every aspect of every dish.

I’m at Oishii Ramen once a fortnight catching up with mates in the industry. The spicy miso ramen remains my go-to. It’s never disappointed me and is the best thing for a hangover or if you need a little bit of an energy lift. It’s also good at clearing the sinuses during hayfever season. There’s also that consistency. You don’t go there from week to week and find the broth is slightly over-seasoned or under-seasoned: it’s the same every single time. It’s a guaranteed solid bowl of ramen.

I go across the road from work to a place called D’Angelo. It roasts its own coffee and the owners have worked away at it for the last few years and chipped away at things. It’s got this great local following now and all of our staff buy our coffee from there. It’s consistently good and has good prices as well. Our doctor is near Artem Coffee so we’ll grab a coffee from them when we’re there. Owner Darren Ho is always there working his butt off and makes some delicious food. I normally have the pastrami sandwich and my girls like the honey cake. He’s just opened another one in Highgate.

Where I Send People When Manuka Is Full

When we’re fully booked, sending people around the corner to Bread in Common is a no-brainer. You don’t want to recommend someone go to a restaurant that doesn’t live up to the hype. Bread in Common has always maintained its standards, whether its breakfast, lunch or dinner. They make everything on site. That’s the most important thing. From the moment you get there and see the beautiful oven and the fresh breads being baked, you instantly know what’s going on. You look up and you see all the pickles and the ferments. Even though it’s a large space, it feels homely at the same time. I’ve never been there and felt that I’m reading the same menu. It’s always changing, it’s always moving with the season, it’s always working with local producers. I’ve never been disappointed with the food or service. It’s always felt welcoming and it’s a great community space as well. You sit at these big communal tables and end up having a yarn to people you might not normally talk to if you were sitting at individual tables. We get Bread in Common’s sourdough and common loaf all the time for home.

Where I Send People When They Want a Night Cap

I always tell the younger crowd to head to Strange Company for a night cap. It’s somewhere that’s very easy-going. The music says it all. There’s a lot of soul, jazz and just really good records being played. The bartenders want to please you and it’s always a bit of an adventure. You never go there and have the same drink twice. I’ve got a lot of time for [Strange Company co-owner] Greg Leaver. He’s always working the floor and has a tea towel slung across his shoulder. Those guys work hard, man. And when you see that, you want that hard work to be rewarded.

Say No to Garden-Variety Breakfasts

Middle Eastern restaurant Propeller is a place I like to go to for breakfast. It’s a bit like St John in London where you don’t get your normal standard stuff. Kurt Sampson [the chef] puts what’s available and what he wants to eat on the menu. Last time I was there, I had duck livers with grapes in a sherry reduction served on toast. No one else in Perth has the balls to do a breakfast like that and sell it. But when you put your trust in Kurt’s hands, it’s always good. Propeller also serves simpler, more traditional breakfasts too, but every time I go there, there’s always one dish that makes me think, “holy shit, I need to try this”. For breakfast and lunch, Propeller is one of the top ones for me. It’s so underrated and what they do is fantastic, from front-of-house to back-of-house.

“This Place Just Blows Me Away Every Time”

I’ve got nothing bad to say about Lulu La Delizia. I always go the chef’s menu and leave it in Joel’s [Valvasori-Pereza, the chef and owner] hands. The pasta and Italian food that comes out is just absolute perfection on a plate: there’s nothing on there that doesn’t belong. Everything works perfectly together and there’s Joel’s very light touch with his seasoning. When you can taste that someone’s heart and soul has gone into something, it magnifies the flavour profile of any dish. Joel’s got something that he should be very, very proud of. Lulu is a special part of Perth, it’s a special part of Australia and I think the coolest part about it is that he’s true to his family’s Northern Italian heritage. It’s not pretending, it’s not fake, he hasn’t gone out to do something and then cheapened the product. He’s maintained a very high standard. This place just blows me away every time I have dinner here.

I went to Old Young’s Kitchen in the Swan Valley the other day for Jody’s birthday and it was so good. The kids were running around the garden and the food was epic. I’ve always liked [chef] Rohan [Park]. In Perth, there are a lot of egos wearing a chef’s jacket: Rohan’s not and never has been. I’ve always had a lot of respect for Rohan that goes way back to the [native food pop-up] Fervor days. No one else can do what Rohan does with his food. It’s really clean, really well balanced and just really well thought out. The sourdough with the koji butter was epic and one of the nicest breads I’ve eaten. It was just the perfect balance. From there we had kangaroo tartare with crocodile garum and “yesterday’s bread” which he turned into these wafer-like crisps. The menu is balanced and hits the spot for kids and families. They’ve looked after everybody and haven’t pigeonholed themselves as just a distillery.

Le Rebelle is an exciting restaurant on Beaufort Street and owners Sarah and Liam Atkinson continue to smack it out of the park. You can see that genuine sense of hospitality and soul behind the business that a lot of restaurants are missing. Sarah wears a lot of humility on the floor but her and her team really make you feel welcome and at home. Liam’s food is quite clever: quirky, sort-of French techniques in a modern world. You can tell all the produce as well as the drinks list is carefully sourced.

A Restaurant That Captures Western Australia

Bib & Tucker has captured the essence of what we’re about in Western Australia: beaches, thongs (flip-flops) and casual dining. They’ve done something where you feel like you’re going somewhere special. You’re on the beach. You’ve got the ocean. You’ve got beautiful sunsets. The menu is cheffy, but at the same time it’s restrained as well. Chef Scott Bridger is a smart operator and he’s back at the helm of the kitchen. I love that he and [co-owner] Eamon [Sullivan] really care about what they do. The menu caters to all diets, whether you’re vegan, vegetarian or a meat eater. There’s something there for everyone. We love catching up with friends and having a pizza and some beers. It’s one of those safe places like Bread in Common. It’s very casual, but very smart and sophisticated at the same time.

I want to shout out [brothers] Jeremy and Anthony Blanchet at Angel’s House in Fremantle. I’m not looking for three Michelin stars when I go there, but I always feel happy and satisfied when I leave that place. It’s just simple, honest French Provincial cooking. There’s no wow factor but it’s just got a lot of flavour. You can just tell that it’s someone that believes in their cooking. All of Jeremy’s beef dishes are really good, like the beef bourguignon or the beef shanks with the Paris mash and jus. It’s all very comforting and there’s a great wine list. We took the team there for an end-of-year staff party and I’ve been there a couple of times as well.

The best fish and chips would have to be Kailis Fish Market Café in Fremantle. I often struggle to find decent fish and chips in Perth and prefer to make it myself, but I was very impressed with what they’re doing. The market hall is huge and has different stations serving fried, raw and grilled seafood. You feel like you’re on holiday, you don’t feel like you’re forced into something and you’re chilled out. The kids love it because you can look at the fish in the water. It’s a great spot for summer.