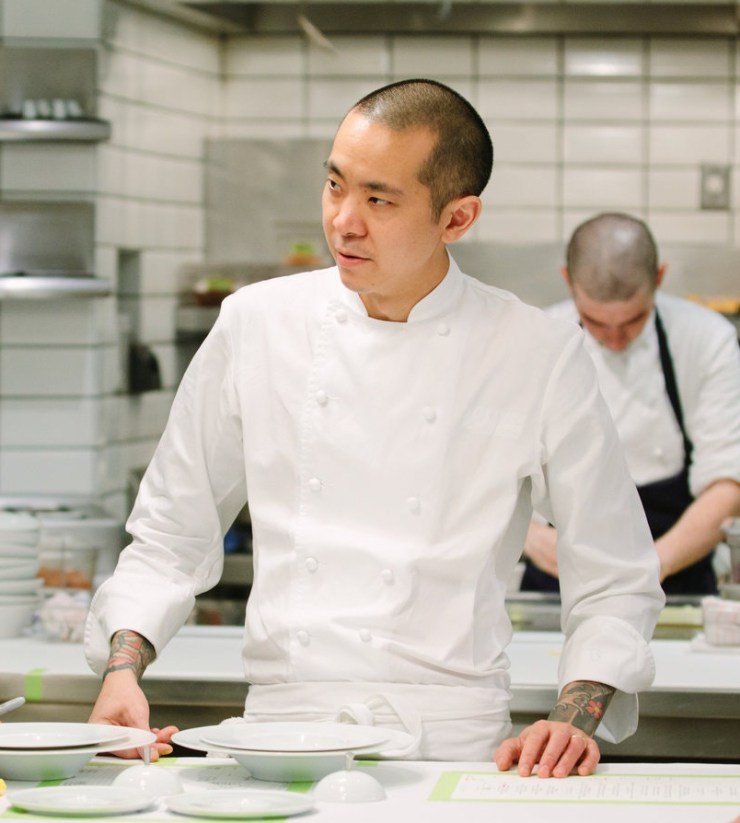 Former Per Se chef de cuisine Corey Chow (now executive chef at The Stanwich Club) might have run one of America’s finest restaurants, but when he’s off-duty, he prefers to keep things simple. “My favourite places are really low-key,” says the product of San Gabriel in California, one of America’s premier Chinese food enclaves. “You know: the type of places you don’t need reservations because they’re never that crowded.” Comfort dining features prominently in his guide to New York, from late-night eats in Chinatown to a homely, below-the-radar Japanese diner.

Eating In New York: An Introduction

The thing I love about New York is that it’s so culturally diverse. You can walk two blocks and you’re in a whole different neighbourhood. Little Italy is literally a square block radius of – I would say – five to eight blocks. Once you pass that you’re in the heart of Chinatown. In The East Village, there’s a lot of Japanese restaurants. There’s a lot of cultural influence and little pockets everywhere.

Not a lot of people know about Uminoie and I don’t really tell that many people. It’s nice to keep it for myself but I guess that’s about to change. It’s a restaurant serving Japanese comfort food based on family recipes from the Goto Islands in Japan. The chef – Mutsumi Tanaka – uses these two induction burners to cook really simple, home-style food that’s tasty and affordable. It’s kind-of my go-to for Valentine’s Day when we haven’t figured anything out. You never have to wait in line which is great for me, but unfortunate for them because it’s really good. It’s like an izakaya so it’s a lot of small plates. Goto-style udon is her specialty. It has hand-cut udon noodles that are thinner than usual and a fish broth that is really, really tasty. It’s a simple soup using her father’s recipe. She also has izakaya staples like karaage (fried chicken) and ohitashi (blanched vegetable salad), plus her nikujaga (beef stew) is really good. She also has a really great kaiware (daikon sprouts) salad with crab meat. It’s so simple, but I love it. What sucks about New York is that real estate and rent is so expensive, so restaurants come and go. A lot of spots tend to get bought out or it gets too expensive to stay in business, so a lot of my favourite old-school New York spots disappear, unfortunately. Hopefully with more exposure, operators like Ms. Tanaka can make some money and survive.

I really like the The Ear Inn. It’s a really small place in Soho that opened in 1817 and is one of the oldest bars in New York. We used to go on Sundays all the time to hear a jazz band play. We actually wanted to get married there. Instead, we had our wedding rehearsal dinner there with both of our families. They all first met here so it’s a really special place for us. The food isn’t mind-blowing, but it’s just really delicious. There’s a really good garlic shrimp dish they’ve became famous for. It’s simply a bunch of sautéed shrimp in this really spicy, siracha-y garlic broth, and it’s served with butter-toasted-bread. It’s awesome and it’s not expensive. The beers aren’t expensive, either. The bar itself is a historical landmark and there’s a museum upstairs. On the edge of the sidewalk, there’s a sign that says: “this once was the waterline of Manhattan”. Now you can see it’s like three blocks of new construction. The burgers are good, too. There are also classic Irish dishes like Shepherd’s pie. It’s funny: the chefs in the back are all Chinese. I have no idea where they got trained, but saying that, the bar also has great dumplings. Once you start going there, they get to know you, so it has that real neighbourhood bar feel. In the summertime it’s really nice. There’s seating on the sidewalk and it’s not like the typical chairs and tables, but these wooden benches that are built around trees. It’s really cool to see people bring their dog and kids there.

Where To Eat In Chinatown

In Chinatown I love Nom Wah. It’s really old-school. Back in the day it used to be a tea parlour then they stated doing dim sum and classic Cantonese food that’s really good. I seem to really crave that. Being born and raised in L.A, I’m kind of particular in a sense. I mean, L.A. has awesome Chinese food: New York is a little bit different, so I think Nom Wah just reminds me of home sometimes. Despite the awkward name, Wu’s Wonton King is awesome. There’s a killer, killer king crab that you order for like eight people. You order one whole king crab and then they do different preparations: like, part of the leg, they’ll steam with ginger and scallion; the other smaller parts of the leg they’ll wok-fry with something spicy or do salt-and-pepper style. Then they’ll take the body meat and do something with that. And it’s cheap. The crab might be a couple of hundred dollars, but you split that between eight people it’s not that expensive. The wontons are really good too. Those two are my go-tos in Chinatown. A lot of these Chinese restaurants don’t charge corkage, so I normally go with like 10 or 12 people and everyone brings a nice bottle of wine. Another place in New York that’s pretty industry is the Peking Duck House where they’ll carve a Peking duck tableside for you. It’s no corkage and really cheap, too. It’s like $27 a person and you get Peking duck, a soup, three or four dishes, vegetables, rice and dessert that you share. It’s fun.

Greg Baxtrom’s restaurants are really, really fun in summer. Half of each of his restaurants are outdoors and they’re very interactive with beautiful wooden benches, tables and gardens. His dad built everything. It’s really cool. His newest restaurant is called Maison Yaki. It’s based on a yakitori restaurant but using French techniques: smart things like duck a l’orange with skewered duck tenders. There’s a lot of classic French sauces on frog legs and what-have-you. Greg is all about an affordable approach, so everything is really cheap: it’s like eight bucks or something for two skewers. There’s also an outdoor patio and bocce so it’s a great place to go to in summer and spring.

Where The Per Se Kitchen Team Drinks After Service

If we’re in dire need of a drink right away, across the street from the restaurant, inside of a hotel, is Blue Ribbon Sushi. It’s open till late and serves food till like 12 or 12:30. There’s an old-school New York brasserie called Blue Ribbon Brasserie where all the old chefs used to go after work to hang out. It’s a cool place to have drinks and eat. But from midtown it’s a journey, and you don’t want to waste time when you’re going out after work, right? This is literally across the street and it serves sushi as well as a killer, killer oxtail bone marrow fried rice with all of this gochujang that I have to get every single time. I like to go there after work and have that with a Sapporo. Honestly though, a lot of chefs go to Chinatown after service. Chinatown is cheap. Great NY Noodletown is an old-school New York Chinese restaurant that serves one of my favourites, wonton noodle soup. And it’s open late and has cheap beers.

“We’re Chefs At Nice Restaurants, But We’re Not Fancy”

I’m not really into kitschy cocktail bars: I’d rather go somewhere like Old Town Bar in Gramercy where I can have a cheap beer and a shot and some buffalo wings. There’s really good chicken wings there. We’re chefs at nice restaurants, but we’re not fancy.

Joe Anthony at Gabriel Kreuther is doing really, really nice food. He just got two Michelin stars. The Modern has one star and is really nice and approachable. Tom Allen is the chef and he does really good food. The Modern is really two restaurants, I guess: the bar and then the restaurant. It’s all in the same room, but the bar is kind of separate. It’s fun to go there to have a couple of plates and a couple of glasses of wine. It’s modern technique. It’s green market and vegetables and local produce and it’s good food. And of course, you have to take visitors to get a pastrami sandwich at Katz’s Deli. That’s an experience.

Pasquale Jones is an Italian restaurant in Little Italy that has really delicious pizzas and pastas based on local ingredients. It’s awesome and, again, green market-driven and uses local produce. I went there recently and had a pizza with shaved raw brussels sprouts, pecorino and guanciale. It was delicious.

Halal cart is a New York staple to me. There are these guys called The Halal Guys who started on the corner of 53rd and 6th Ave with these little carts that they sold halal food from. Things like lamb or chicken over rice with some pita bread, lettuce and white and red sauce. It’s street food and it’s awesome. It’s crazy on the weekends because all the drunk people go there. There’s always a line, too. It’s like an institution. The carts are yellow and red. If you’re a New Yorker, you’ll recognise these carts straight away.