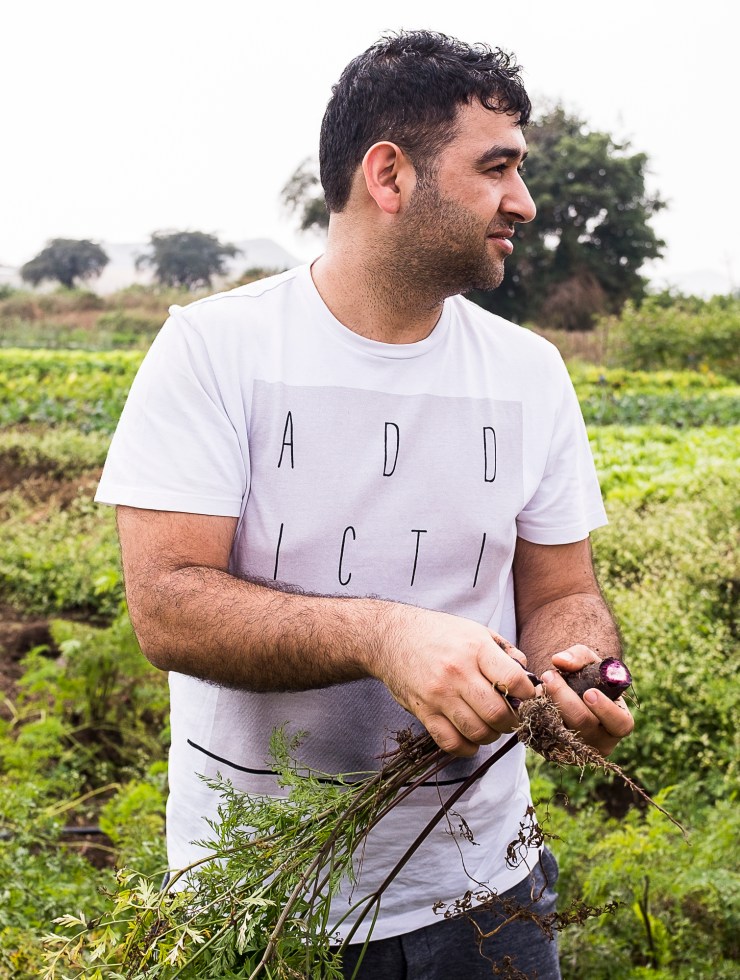 At his Mumbai restaurant Masque – named the 2020 One To Watch by Asia’s 50 Best Restaurants – chef Prateek Sadhu shares stories about India, including his own. Born in Jammu and Kashmir, Sadhu grew up around farms, food and accomplished family cooks. After honing his craft at high-powered international kitchens including Per Se, Alinea and Noma, he returned home and began earnestly championing farmers and artisans around the country. Sadhu’s Mumbai hit-list mirrors his own international tale and includes everything from regional Indian favourites to contemporary American cooking.

One of the biggest messages I keep reiterating is that India isn’t just a curry nation. That’s just the perception a lot of people have developed and has come from England. We’re beyond curry. We’re beyond chicken tikka masala. We’re beyond naans. India isn’t just one dish. It’s not a number 36 on a menu and then you choose what protein you want. Indian food is 29 states and every state has its own cuisine. Even though Mumbai is overwhelming, it’s a good introduction because you can – if you look hard enough – get any regional style of Indian food in Mumbai. It’s really important to delete your perceptions about India and Indian food and just come with a really open mind and an open heart. If you’re closed, you’ll find it difficult to really adjust. Just accept that’s how the city is. It’s crowded, yes. It’s noisy, yes. But if you accept it, you’ll have a blast.

Before You Leave Home

If you’re an international traveller, it’s always good to drink bottled water and to keep a little medical kit with you. Make sure you’ve got antacids and digestive medicines and a few things for stomach aches. You’re coming to a country where the food is very bold and spicy. For a lot of people, especially those from the west, it can take a toll on the stomach. Even when I travel, I always have a small emergency kit with antacids, anti-diarrhea stuff. You can’t be macho about it. You have to accept that sometimes you’ll eat something and you’ll go, “Oh, this doesn’t agree with me.”

My favourite breakfast place is Cafe Madras which specialises in South Indian breakfasts. It’s an institution and has been there since the early 1900s. Over the last four years, I’ve had almost a hundred meals here and every time it’s exactly the same. It’s so consistent. There’s always a big queue. Even if you have a reservation, you’ll have to wait to get in. My recommendation is to go early, stand in queue, and just order a couple of my favourites. One is the podi upma, a semolina porridge with podi which is a dry chutney made of spices and roasted and ground lentils. The second is rawa masala dosa. Masala dosa is usually just made with fermented rice flour batter but this one is made with semolina and is my favourite. It’s really crisp and crunchy and has everything.

One of the restaurants that people don’t really talk about is Peshawari in the ITC Hotel. It specialises in North West frontier food. Northern Indian food has been influenced a lot by migration from central Asia. There’s a lot of kebabs and a lot of rich gravies and biryanis. You’ll find really authentic flavours in there. This is one restaurant travellers should visit to really understand the nuances of classical Indian food. They should have the dum biryani and they should have nalli nihari which are lamb shanks braised with onions and a bunch of spices. Kakori kebabs are melt-in-the-mouth kebabs that also need to be ordered. These kebabs were introduced to India by a king who had no teeth but was fond of eating lamb and kebabs. He asked his chef to make him a kebab that really melted in his mouth. And when I’m saying melts, it really does melt in the mouth. When the server serves it, he can’t pick it up. She or he has to slide the kebab onto your plate from another plate.

O Pedro does modern Goan food and is another restaurant I really like. India was a British colony but Goa was one of few regions ruled by Portuguese people and you can still see their lasting influence. Portuguese cuisine and culture have huge influences in its food. Goan food has homemade cheeses and Chorizo-style sausages that we now call Goan sausages. The cuisine also has a lot of sourness which comes from the local toddy vinegar they use. The restaurant does lunch and dinner and serves small plates and big plates and beautiful poees and sannas, which are traditional, local breads. There’s a good selection of craft beers as well.

Bombay Canteen is another great restaurant. It really focuses on regional Indian food with influences from all over the country. It has a duck curry inspired by the chef’s grandmother that is served with a beautiful appam (rice flour pancake). They also do this egg dish called egg Kejriwal: there’s toasted bread, a spicy green chilli and mint chutney, melted cheese, and then a fried egg on top. It’s a really classic take on an egg dish that’s quite popular in Mumbai.

One Street Food You Need To Try

One thing which everybody needs to try is vada pav. Vada pav is basically a burger and Ashok Vada Pav is the best place to have it. Pav means bread, and vada is the stuffing. It’s made of potatoes, onions, curry leaves, mustard, fresh green chilies and mustard oil made into a nice homogeneous mass. You can still feel the potatoes in your mouth so it’s not really a mash. Then it’s battered in gram flour and fried. That’s the base. They do two different kinds of chutneys and a powder that is made with dried garlic, dried chilies, dried peanuts and dried ginger. This version is special because they add crisps and more chutneys. The patty is nice and hot and crispy, and the pav is really good.

“Vegetarian Food Is In Our DNA”

Swati Snacks is somewhere people need to go to if they’re in Mumbai. It’s one hundred percent vegetarian. Anyone coming to Mumbai needs to understand that vegetarian food is in our DNA. It’s not a fad. It’s just normal and how we eat. And Swati Snacks is one place where you can really go and try snacks from the region of Gujarat which is the vegetarian state of India. Panki – which is my favourite – is the first thing you need to try. It’s a rice and lentil batter in banana leaves cooked on the griddle and comes with two chutneys. The pav bhaji is really good too. Pav is the bread and it comes with all the vegetables mashed together and cooked with spices and everything. It also does good dahi poori which is basically pani puris (a crisp ball filled with tamarind water and fillings) pre-filled with yoghurt and chutneys.

Shree Thaker Bhojanalay is one of the most iconic thali places in India. It’s a really classic Thali restaurant serving Gujarati food. Again, it’s one hundred percent vegetarian food from crisps to curries to sauces made with chilies and vegetables. Your plate will have dry vegetables and roasted vegetables. It’ll have rice. It’ll have breads. It’ll have pickles. It’ll have a drink made with yoghurt. It’s as much as you can eat. It’s in South Mumbai and it’s casual. You need to get early just to get in because there’s a huge queue outside all the time.

The City’s Most Famous Sandwich

The Bombay Sandwich is a vegetable sandwich that Mumbai’s pretty famous for. Chowpatty is an area right next to the sea where you can get all the street food. It’s right next to the sea and is where local families go to eat so it’s a legit place. It starts in the evening after 6pm and is somewhere any person traveling to Bombay should go and visit because it’s such a treat to watch. There are 50 restaurants just serving street food, from pav bhajis to pani puris. It’s like a street food Tsukiji market. There is also ragda pattice which is basically small spiced potato cakes that are fried and topped with yoghurt and a sharp, sweet and sour chutney, then a spicy chutney, then peanuts and jaggery powder on top. My mouth is watering.

An American In Mumbai

Mumbai is like New York. It’s like a melting pot and there’s a lot of people from all over India. Since it’s a financial hub, there’s a lot of jobs and a lot of job opportunities, so it becomes like a melting pot of India. Mumbai as a city is also a melting pot for chefs. If you come to Bombay you’re not just flooded with just Indian food. There’s a chef from San Francisco called Alex Sanchez that’s been here for 10 years and has just opened a new restaurant called Americano. He does really new, really fun and modern American – a little like California-style food. His pizza is amazing and he does amazing classic pastas like tortellini en brodo. These kinds of foods are really, really, really good for the entire food culture of the city.

An Introduction To Indian-Chinese Food

Indian food is the most popular food in India, but the second most popular food is Chinese. We border China so there’s a huge Chinese population in India as well as a big Chinese food influence, but the thing is we’ve adapted Chinese food to our own taste, which is spicy and sour. It’s one of the go-to foods for everybody. Yauatcha is one of the most well-known restaurants serving Cantonese food; another is Ling’s Pavilion which does more Indian-Chinese. You’ll find hundreds of Indian-Chinese spots in the city with dishes like chicken Manchurian on their menu. If you ask for it at any Chinese restaurant outside of India, they’ll be like: “What the hell is a chicken Manchurian?” You’ll only find this cuisine in India. They use chilli vinegar and tomato ketchup. There’s also soy, ginger, garlic, onions.

I call Masque an Indian restaurant. It’s as Indian as it can get. But the thing is we are looking at Indian food through a very different lens: the lens of ingredients. We want to change the idea and perception of Indian food through ingredients. First, we want to tell the world what Indian ingredients stand for, and then create a cuisine that is as Indian as it can get through those ingredients. For us, traditions are very, very important, I mean that’s the building block of the restaurant. But we can only preserve traditions if we don’t change them. And so that’s the thing, it’s like now we are on a cusp of changing that perception around Indian food, but through ingredients. I think that’s how I explain the restaurant because it’s as Indian as it can get. We’ve just opened the Masque Lab which is the development kitchen for Masque but also where we’re trying to do private dinners to raise money for research as well as fun dinners. Like, I’ll go to Japan then I’ll come back and want to do a Tokyo-inspired breakfast. Sometimes you just get really inspired and want to let things out of your head and cook something – things that I couldn’t do at Masque.