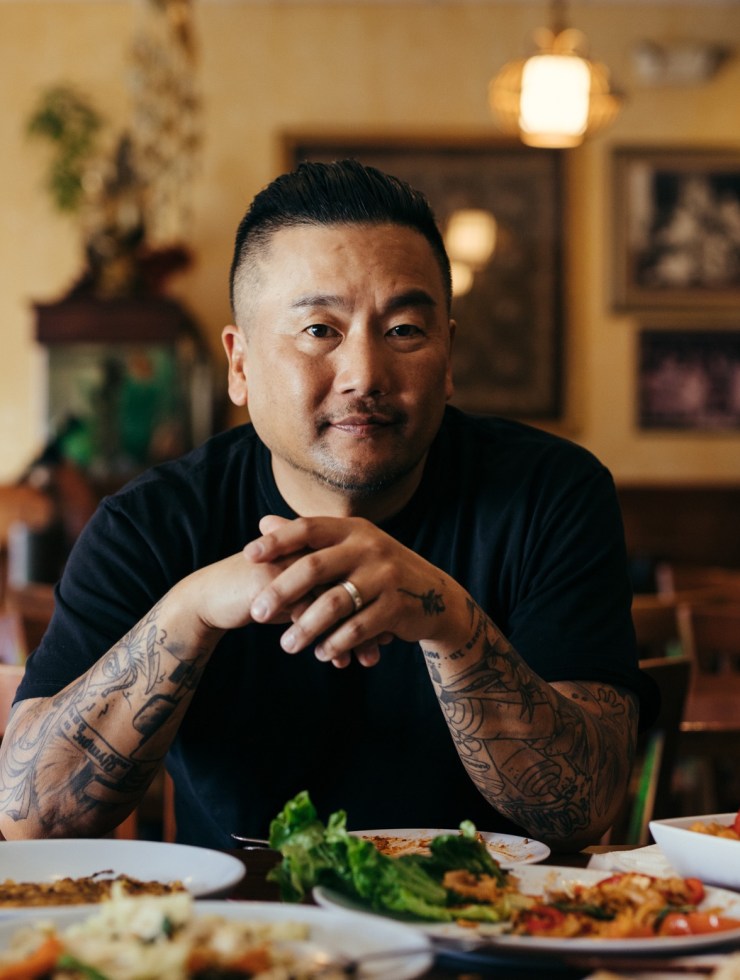 Roy Choi loves his community. Kogi, his revolutionary Korean-Mexican food truck, was born out of a desire to represent – and feed – cosmopolitan LA, while projects such as his Broken Bread TV series use food as a vehicle to bring people together. The influential Korean-born, American-raised chef shares his favourite LA spots including some old-school favourites in Koreatown, the diverse neighbourhood that features prominently in the Kogi story.

Los Angeles Is Back

LA is back, for sure. People are starting to trickle back to the offices. There are so many shows coming out and they’re filming left and right. And the town is busy. Restaurants are doing covers that they’ve never ever done before and there are record numbers of people going out in droves. There’s a whole new landscape of young chefs being able to open restaurants, because real estate is so accessible, so you have this fertile kind of awakening and growth. The city is on fire right now. It’s beautiful. It’s like thriving, it’s like nothing you’ve ever seen before.

There’s a new wave of young Asian-American chefs in their late 20s that have become entrepreneurs. When the restaurants they were working in closed [during Covid], it was a calling for them to start their own places. They’re unafraid of expressing their perspectives and cultures through food. There’s Hanchic which is doing this kind of new Korean cuisine that has influences from Italian and European food. You might find a kimchi carbonara in there, or a spicy seafood paella type of thing made with Korean gochujang. You’ve got Anajak Thai in Sherman Oaks which just got named best restaurant in Los Angeles by the LA Times. It’s now run by Justin Pichetrungsi who took over his parents’ restaurant and started doing these Thai-influenced, Japanese binchotan dinners out in the alleyway during Covid. Then there’s Camphor, one of the best restaurants in Los Angeles, which is run by young Asian-American chef, Max Boonthanakit. A lot of these young entrepreneurs are congregating in night markets and doing pop-ups and collaborating with each and cross-pollinating their followers. It’s pretty exciting.

The immigration of Koreans en masse to Los Angeles happened in the late 60s, early 70s and throughout the 80s. For three decades, a lot of people never really recognised Koreatown other than those of us that lived in it: mainly Koreans and Latinos. Food has been a bridge for a lot of people to learn about the culture that was always here. LA is a very, very big city landscape-wise. We don’t have a CBD. Geographically, the city’s like a quilt: a patchwork of different environments, different cultures and different neighbourhoods. It can be really hard to really understand or figure those things out without some sort of olive branch. It took a long time, but food became that olive branch over the past 25 years and really brought people together. From a larger consumer perspective, [LA Times food writer] Jonathan Gold had a lot to do with it, as did the food revolution of blogging and social media.

A good entry to Koreatown would be a bowl of soon dubu at Beverly Soon Tofu. It’s very soft silken tofu that’s so soft, it can’t hold its form. It’s cooked at a roaring boil in a broth together with shrimps, clams, mussels and kimchi and comes to your table in the pot it was cooked in. You crack and egg inside and slurp it up with a bowl of rice. It’s one bowl, very user-friendly, packs a punch and there’s not much you have to navigate. Chosun Galbee is still, hands down and on the record, the best Korean barbecue restaurant in Koreatown. It’s a big grand indoor and outdoor restaurant with barbecue tables. It’s a very traditional style of service, but again casual. It feels very high end but they have lunch specials that won’t be more than $15. It’s probably got the best quality food as far as ingredients go in Koreatown. A lot of the time you can’t trust the meat in Koreatown because there’s a lot of all-you-can-eat BBQ places that are cutting corners. In life, when something’s too good to be good, it usually is. If a place is offering you a $9.99 deal for all the meat you can eat, you gotta remind yourself that this doesn’t add up.

The Importance of Specialised Restaurants

Although Koreatown has a lot of all-purpose restaurants, the way Koreans eat is really all about specialised individual places. If you’re just looking for a bowl of soup, you go to a specific spot. If you’re just looking for thinly sliced pork or intestines, you go to another spot. It’s a really beautiful and important thing that, as you get more advanced and move from the novice level to the intermediate, you really seek out the specialty places that only do one thing. A great example of that is a place called Hanbat. It basically serves one thing: a cloudy beef soup called shul lung tang that’s cooked like pho. It’s medium-sized, not fancy, very clean and it’s full of beautiful smells. And it’s always packed. You get your food in a minute. Sometimes people order as they’re coming in. Some people even call from the car and order so when you sit down the food is already there.

All About Korean Fried Chicken

There are a couple of forms of Korean fried chicken. One is a whole chicken that is split down the middle, soaked in milk and beer overnight and fried spatchcock-style. There’s no batter or breading and the chicken is very similar to what happens with a Peking duck: the skin gets ultra crispy and the meat stays ultra juicy. It’s usually eaten with pickled radish, shredded cabbage, salt and pepper, sesame oil and a cold beer. The other kind of fried chicken is the one you’ll see around the world and features wings and drumettes that are tossed in a batter and covered in a sweet, spicy sauce. For the whole fried chicken, you’ll want to go to The Prince and OB Bear. Those two are the best places: late-night. Lots of beer and alcohol. A very fun, inviting mix of old and young people. For the other style, there’s the popular chain called Kyochon and another place called BBQ Chicken LA. That place is pretty famous as well.

A Taqueria Rite of Passage

There’s a taco place called El Taurino that I’ve been going to since I was a high-schooler. That’s a great place for every youngster in Koreatown. It’s like a rite of passage. You go there on weekend mornings for tostadas and menudo (tripe soup from Mexico) and then you go there on weekends for drunk food like tacos and burritos made with carne asada (grilled steak), al pastor (spit-roasted pork) and lengua (beef tongue).

All About Korean-Style Sushi

Korean sushi doesn’t focus on the same fatty type fish used in Japanese sushi. Instead, it places the focus on very lean, thin fish like fluke and a lot of roe, eggs, livers and innards. Things like that. It’s a very different experience but there are a couple of places. Noshi Sushi seems to be pretty popular and serves the whole gamut. There’s also A-Won Restaurant that serves something very popular called a fish egg rice. It contains five or six different types of fish egg served over warm seasoned rice. You’ll have tobiko (flying fish roe), salmon eggs and caviar served with a spicy hot pepper sauce and chunks of lean fish that’s all mixed together. It’s drinking food that’s kind of for older tastes. We’re holding on to the last generation of people that really understand this type of food so I’m wondering how it will evolve for the next generation.

LA has a lot of these young coffee and tea shops that are celebrating Asian, Latino or African-American cultures in ways that aren’t superficial. Baristas are taking flavours they grew up with such as persimmon or sesame powder and infusing them into their coffee blends, teas and espresso drinks. You’re seeing it in the way they roast their beans or where they source their coffee from and the people they employ. They’re really meeting the community where they are. Some of these places are Coffee MCO in Koreatown, Alchemist Coffee Project, Harun in South Central Los Angeles, and Coffee Coffee in Melrose. New tea shops like Steep in Chinatown are making tea cool for a new generation.

There are a lot of classic LA things to eat. I think you should go to the Santa Monica or Hollywood Farmers’ Markets when you’re in LA. That’s an amazing thing to experience. So is finding taco stands and taking a chance on the street. You just have to drive around and look for it. We have al pastor taco trucks here. One that’s very popular here is Leo’s. Another popular one is called Taco Zone in Echo Park which is famous for its carne asada, buche (stomach lining). There’s also Guerrilla Tacos in the arts district that does a lot of vegetarian tacos.

From Los Angeles to Las Vegas

Best Friend opened at the Park MGM in Vegas on New Year’s Eve 2018. It’s our biggest project to date and a culmination of more than 10 years of everything from Kogi until now. I’ve put everything I’ve had into it and, for many reasons, feel like it’s our best restaurant. First are the budgets we were allotted to build a place of this scale. There’s also the ability to have fun in a place like Las Vegas, and not just be solely focussed on the culinary high-minded foodie aspect of what a restaurant needs to be. Sometimes as chefs and restaurateurs, we get a little convoluted and treat restaurants as our own personal trophy validation items. In these pursuits of excellence, we don’t always think of the diner. Best Friend is the complete opposite of that. It’s like a fun, big pizza parlour after a Little League game, or a place you want to go with your grandpa and your grandma and your aunt and uncle and cousins for a birthday party. Everyone’s welcome. It’s Korean food meets stoner food meets LA food meets my food. It’s a place of celebration and you come as you are. Being able to serve quality food in a fun environment is something that I’m really proud of.

In 2019 LA went through a bit of an ice cream moment where people were getting very creative in the way they were using Californian produce. They’re not Californian spots, but places like Jeni’s (Columbus, Ohio) and Salt & Straw (Portland, Oregon) that have emigrated here. Doughnut places like The Donut Man or Sidecar Doughnuts are also getting very creative with the way they’re using produce. One of the biggest things that has come to define LA-style food post-Kogi is a place called Sqirl. That’s been one of the biggest kinds of mash-up, character-defining restaurants that describes what it feels like to be in LA. My go-to order is the toast with ricotta and jam and the rice bowls. Coffee is also a big thing here. We’ve got a lot of great coffee shops like Go Get Em Tiger, Dinosaur Coffee and Endorffeine Coffee.