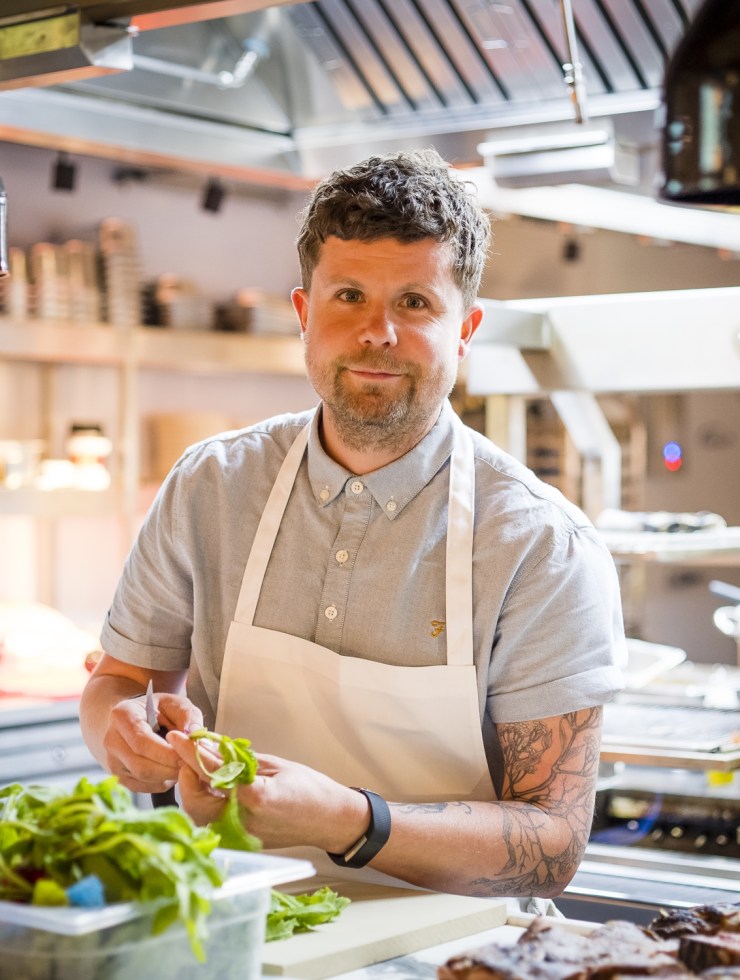 Born in Dublin, London-based chef Robin Gill has worked under revered old-school chefs such as Marco Pierre White and Raymond Blanc but his approach to cooking is entirely of-the-moment. His cookbook ‘Larder’ advocates the use of fermentation, pickling and curing to create condiments that make cooking a breeze and joy. When he’s not overseeing his London restaurants The Dairy, Sorella, Counter Culture and Darby's, he’s eating his way around the capital. These are the names he’s got pegged as London’s next-big-things (hint: one of them cooks incredible seafood out of a sea container in Brixton).

An Unexpected Gem In Brixton

Naughty Piglets is the perfect example of people who are passionate about wine and cooking: people who are cooking their socks off. It’s a tiny little place in Brixton, in a space where nobody would ever think to put a restaurant, and they’re absolutely smashing it. They do the most amazing Iberico ham and béchamel croquettes, and an amazing crab with XO sauce and peanuts. It’s an eclectic mix but it just clicks. They also have the most amazing wine list.

Some Of The Best Seafood In London

There’s a guy called Simon Whiteside who’s cooking some of the best seafood in London out of a sea-container in Brixton at a place called Roe Restaurant. He’s doing incredible stuff. Things like seafood charcuterie and octopus terrine. He’s just phenomenal. He’s a one-man band and he’s buying fish directly from guys in Cornwall, so it’s impeccable, high-quality seafood, and at a really good price. He’s very under the radar, but a lot of the chefs are talking about this guy right now. Editor’s note: Roe Restaurant has now closed its pop up at Pop Brixton. You can follow its Instagram account to stay up to date with chef Simon’s next moves.

One of my go-tos is Sabor. Chef-director Nieves Barragan was previously running Barrafinna; she was the one to really put it on the map. It’s an amazing place – great cooking, and the moment you step into the restaurant you almost feel like you’re on holiday somewhere like Parma or San Sebastian in a little coastal bar. You always feel good spending time and eating there. The food is all about the ingredients, and the wine list and sherry selection is off the charts.

One of my favourite restaurants is Som Saa in Shoreditch. The spice and level of flavour that those guys manage to bring out is phenomenal.

“I Think It’s The Best Cooking In London”

On another spectrum, if I wanted to go for a blow-out, I’d go to Bibendum Oyster Bar. It’s set in the old Michelin garage, so has a lot of history of great cooks that have passed through, and most recently, Claude Bosi. It’s a beautiful setting, and just a great way to spend the day. Have a few afternoon drinks and maybe some shellfish in the oyster bar, then move upstairs to the restaurant – which got two stars in its first year. I think it’s the best cooking in London.

Everybody goes to Borough Market, but what I think everybody should be doing – which is kind of a better kept secret – is go to Maltby Street Market. On a Saturday it’s just phenomenal. Malty Street Market is in Bermondsey, and there’s a whole lot of breweries around the area, but you don’t want to miss 40 Maltby Street; one of the best restaurants in South-West London. The cooking there is just phenomenal, and the atmosphere is amazing. It’s also a natural wine wholesaler, so you’ll find some of the nicest, most interesting wines around. It’s in an old railway arch. You really feel like you’re in proper old London with cobbled streets and old warehouse properties. It’s beautiful, and lovely way to spend a Saturday and a nice walk from London Bridge.

It’s already so well-known, but I just love St John Bread and Wine. It’s completely timeless and the kind of place that I really love going to. The whole feel of the place is just phenomenal. It has a real sense of occasion. The wine list and bar snacks are amazing, and the welsh rarebit is an absolute boss. They also have a great reputation for looking after their staff. Its parent restaurant, St John, is nearly 30 years old now and it still feels so relevant. The River Café was one of the first restaurants I wanted to work in when I first moved to London. Well, I didn’t get to work there so I just ended up eating there, and quite a lot. Their beef carpaccio is incredible. As is the turbot they cook on the bone over the fire. They have this amazing big wood-fired oven where they do a lot of the cooking that gives you incredible flavour. It’s just stunning. Really, really tasty stuff. Places like St John, The River Cafe and Moro; they’re institutions, they’re establishments. To build something that is an imprint on the dining and restaurant scene in London, that is certainly an inspiration in itself.

The Quality Chop House is another great one. The room is just beautiful; a proper old London establishment. It used to be a place for the workers – for builders and cab drivers who would go there to get a bacon butty or something like mince on toast. It’s great cooking with a fantastic wine list, and you know when you’re in the good hands of chef Shaun Searly, that it’s going to be absolutely spectacular.

When I first moved to London, I worked very close to Soho, and I’d often go to Café Boheme to have a drink in the afternoon. They always have a couple of jazz or soul musicians on in the afternoon. It’s the hustle and bustle of the place. The people-watching there. It just starts the day off real nice. I’d go for drinks there, then on to The French House, which is a great old establishment. I also love Brasserie Zédel. You walk downstairs and find yourself in this amazing room. It’s amazing grandeur, and there’s just nothing else like it. You’ll also find great cooking there, and it’s actually really well-priced.

The Canton Arms in Stockwell is my go-to if I’ve been away from London, or if I want to go somewhere for a nice Sunday lunch. It’s a fantastic spot, and the cooking is amazing. It’s a proper pub with really nice staff. They do an incredible big beef pie with a lot of gorgeous mashed potato.

Places That Look After Their Staff

Brian Hannon and Ben Chapman, the guys that run restaurants Kiln and Smoking Goat, take such good care of the staff. They actually take their whole crew to Thailand once a year for inspiration, and out to visit vineyards, stuff like that. How they look after them is really phenomenal. They’ve got a great reputation for that. St John also has a great reputation for looking after staff, as do The River Café and Hawksmoor.

I really like Honest Burger. I know it’s a chain, but their burgers are just really good.

What I’ve Been Up To

We just launched Darby’s, a restaurant named after my father. It was his nickname, actually. It’s a grand big place with an amazing oyster bar, a big open kitchen, it’s just beautiful. The design is inspired by the big establishments and institutions of Manhattan. It’s definitely different to The Dairy, but the style of service; the warmth and welcome feel of the place is all the same,

Selected Works: Larder: From pantry to plate – delicious recipes for your table (2018)