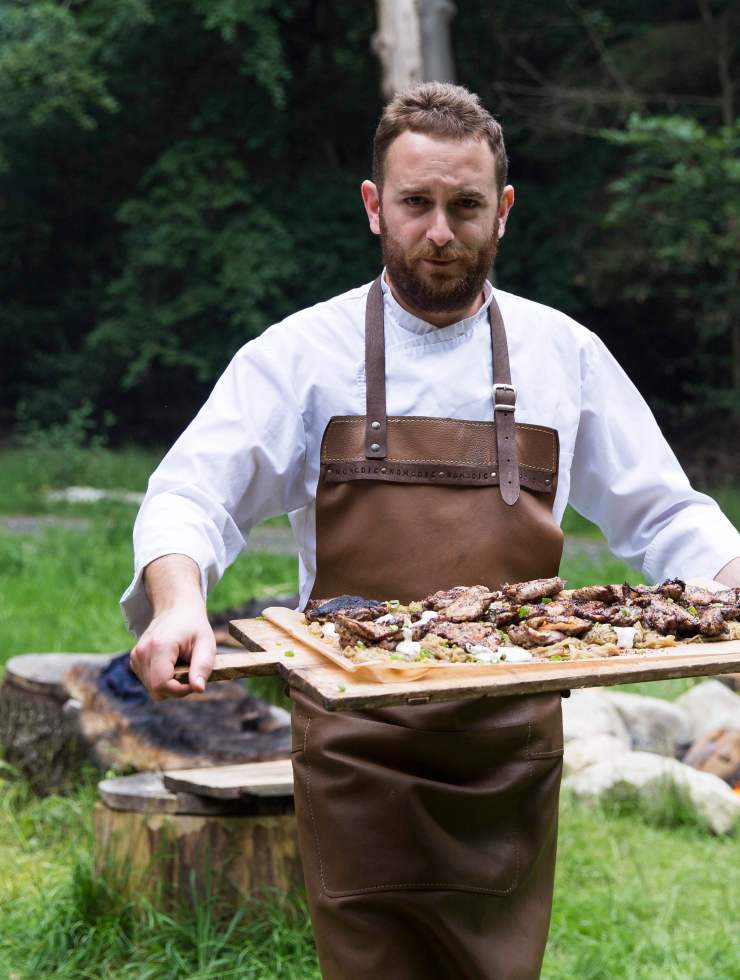 “So you thought you loved the Palomar. You thought you’d be faithful and true. But that was before you met little sis, the Barbary.” So said Time Out London about the tiny Middle Eastern eatery that was co-founded and initially ran by young, go-getter chef Eyal Jagermann, who’s now running his Middle Eastern supper club in London. These are the bars and restaurants that Jagermann likes to frequent for his dose of London’s most fun and spirited.

Everybody has their favourite restaurant in Soho’s Chinatown. I’ve been to all of them and the one that stands out to me is a little place called Dumpling’s Legend. It’s not named the legend for nothing; the dumplings are super fresh and delicious. The prawn and chive, or pork dumplings are really good. So are the wontons. But it’s really all about their soup dumplings. Their stir-fries are great too. There’s a cucumber salad with garlic, chilli and coriander that I love. They’re open quite late so I might head there for a bit of dumpling action after a few pints.

I find myself going a lot to a little place called Eat Tokyo. There are times when I’m be there twice in one week. It’s so delicious and inexpensive. It’s a really fun atmosphere and they have really good sushi, and in my opinion, London’s best prawn tempura. I’ll go there alone just to eat two dishes of prawn tempura – it’s that good. There’s an Eat Tokyo close to me in Soho, but there are a few across London.

Brawn is a really good example of a cool, young, neighbourhood restaurant that’s good for lunch and dinner. Two British guys cook quite simply, but elegantly. They make their own bread and do all sorts of classic British dishes with their own twist and in a very high quality. They have a really good wine list which changes all the time; it’s definitely a place where you can try funky, new-age wines from all over the world. The room is lovely and just has this really cool, local atmosphere.

Tayyabs is an amazing and massive Pakistani grill house in White Chapel. It has so many different styles of curries and breads. Stuff on the grill like lamb chops, mutton and shish kebab, all of which is amazing and ridiculously cheap. Go wild! Eat as much as you want, and it won’t be more than £20 per head. It’s amazing, and it’s BYO. It’s super popular and always packed with chefs. I think it runs quite late too, so you could definitely go after a long night of drinking.

“The Cornerstone of London’s Restaurant Scene”

When industry of food-loving friends come to visit in London, it’s always St. John I take them to. It’s such a special restaurant, with so much local pride. A place like this really only exists in London – that kind of food and style of eating. It’s the cornerstone of London’s restaurant scene and a base for so many things that came after it, not only with food, but with design too. Many restaurants in London just wouldn’t exist today had it not been for St John.

If I feel like celebrating, The River Café is my first choice, and maybe even my favourite restaurant in London. It’s the perfect restaurant, especially on a beautiful day. To have lunch there on a sunny day is heaven to me. I absolutely love and respect what they do. I have a really good relationship with them, and I feel like I’ve learned a lot from The River Café.

If I want to go all out – if it’s my parents’ birthday or another really special occasion – I really like going to La Petite Maison in Mayfair. The atmosphere is perfect; the service is brilliant; and the food is consistent, elegant and top-notch. If I want an extravagant meal, I’ll go there instead of a three-Michelin-starred restaurant and have as much food as I can possibly eat.

What British Food Can Be and Where Chefs Hang Out

Chef Tomos Parry is absolutely killing it at Brat. I still remember the first time I ate there. I left saying to my girlfriend, “Shit, I really need to step it up. This is next level.” I mean, this is really good food in a really cool atmosphere. I think it’s one of the best It’s one of the best restaurants that London has seen in the last few years, in terms of execution and in the fact that it’s all British. Brat really shows you what British food can be. Nowadays, people want to eat well-sourced ingredients cooked simply. You know, keep it tight; keep it elegant; keep it clear, in terms of presentation, flavours and the overall message. Parry completely nailed it. Every time I go there, I recognise at least two or three people. It’s really where you find all of London’s chefs and restaurateurs hanging out. Everyone loves Brat.

Noble Rot is at the frontier of the wine bar scene in London, if not the world. It’s a super elegant but approachable place in a brilliant location. The guys who opened it are really passionate about wine, and about bringing culture and products from all over the world. Places like these won’t exist without passion and that shows in every everything at Noble Rot. They also publish their own wine culture magazine.

A Mediterranean and Middle Eastern Game-Changer

I’m saying this very humbly, but I think the restaurant group of The Barbary contributed to a big shift in how people see Mediterranean and Middle Eastern cooking in London. Obviously Ottolenghi was the guy who introduced that world to the UK, but I feel like The Palomar took it to the next level. The innovation, creativity and atmosphere there is inspired by Jerusalem. I was very fortunate to have joined them three weeks after they opened, and remember the exact moment that I looked around and realised how special it was. I saw people’s faces and recognised that they hadn’t experienced anything like it before. The Barbary started from a desire to bring the eating culture that we have in Israel to London. It’s the style of eating where, the minute you sit down, you’re hit with 12 mezze plates, dips and wonderfully hot bread that’s fresh from the oven and drizzled with olive oil. You get skewers of chicken and meat from the charcoal grill, and can mix flavours and textures. For me it’s the most amazing way to eat. I’m really passionate about that sort of ethos because it’s how I was brought up to eat.

“Take Your Bagel, Get Lost, We Don’t Have Time”

Beigel Bake is open 24 hours, so I find myself there quite a lot at times when I should probably be in bed. It’s everything you want after a few pints: right there in between those two perfect buns, with that ridiculously spicy mustard. It’s so good even with the cranky women behind the counter yelling, “Take your bagel, get lost, we don’t have time.” I love it.