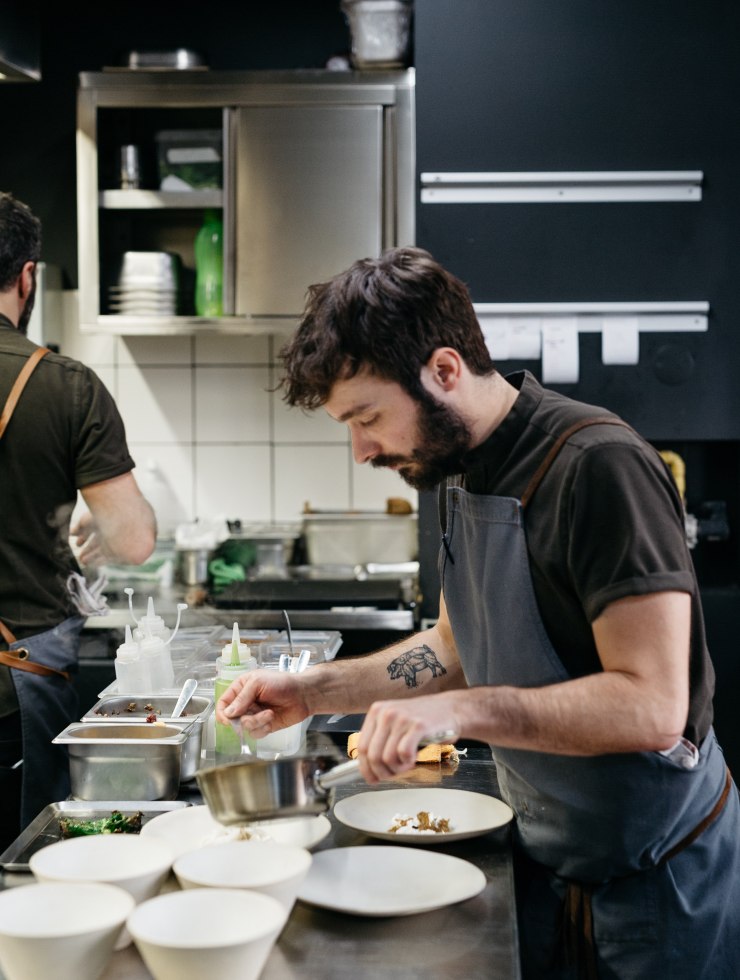 Prado, in Portuguese, means “meadow”. It’s also the very fitting name of Antonio Galapito’s stylish farm-to-table restaurant in Lisbon: a restaurant that, despite being based in a derelict factory, is deeply connected to nature. Or to quote the restaurant’s website: “if it’s not in season, it’s not in the table.” The menu is a direct reflection of Galapito’s network of Portuguese farmers, fishermen and winemakers. Also from his black book: these following Lisbon addresses for the hungry and thirsty.

Taberna Sal Grosso is the restaurant that I go back to the most. I go there quite often. At least twice a month. The food is super approachable. There are Portuguese flavours and inspiration, but it’s modern, I’d say. It’s really tasty. The wine list isn’t great, so we normally take wine with us, but it’s quite normal that I do that, wherever I go. Both locals and tourists go here, but you’ll see that it’s also a restaurant that many chefs like going to. Ze da Mouraria is always filled with locals. The food, which is very traditional, is pretty solid.

It can be hard to get a seat at Taberna da Rua das Flores. They’ve been at the forefront of the casual dining scene for at least five years. Definitely one of the first, and best in Lisbon. The food is very simple, but very nice. They use really good ingredients that can be hard to find. Like lamb sweetbread, or a four-year-old oyster which they serve with seaweed and buttermilk sauce. It’s really good.

Gambrinus is old-school. Expensive. And open until 2am. It’s the kind of restaurant that is still stuck in the 80s. Not only with the décor, but with the food, too. There are the classics like filet mignon with mushrooms and tableside Crêpes Suzette, which is really strange to eat at 1am in the morning, but kind of cool too. This is a place we sometimes go to after service for a late-night meal. We usually go for the croquettes, and they have an amazing dish of fried chicken livers with apples served with white rice. It’s really crazy.

Some Of Lisbon’s Most Innovative Cocktails

The marble bar at Toca da Raposa is huge, and really beautiful. The whole space is really nice. It’s very small and cosy with super low ceilings. A friend of mine, Constança Cordeiro opened it in 2018. She used to work in London too, at Peg + Patriot. She’s always trying to innovate and create, so there are some interesting and tasty cocktails for sure. She actually did our cocktail menu at Pedro, and we helped develop her snack menu. A trade for a trade.

On the same street as our restaurant Prado is Prado Mercearia. During the day, it’s a deli where people come in to buy sandwiches, tinned fish, charcuterie, all that type of stuff. Then during the night it becomes a wine bar with food. We also do a chef’s residency maybe once a month where we’ll have a chef from abroad take over and do their thing for a week or so. It’s a nice way to try Portuguese wines, as we have all of the producers on our list as well as wine from outside of Portugal.

There are only about 10 or 12 natural winemakers in Portugal, and they’re all worth trying. They all have pretty unique styles, which is great because we can include them all on the menu at Prado without worrying that the wine all tastes the same. If you’re in Portugal, I definitely recommend trying them all: Vale da Capucha, Vitor Claro, Homus Wines, Quinta Serradinha Wines, Rufia Wines, winemaker Tiago Teles, Mateus Nicolau de Almeida, and winemaker Marta Soares os Casal Figueira Wines. Natural wine bar Comida Independente is awesome. The owner and employees are all friends of Prado and they’re really cool people. We like to hang out with them.

I recently went to new restaurant Sala and it was really tasty. The menu is driven by Portuguese produce: chef João Sá has very close relationships with farmers throughout Portugal. There are classic flavours, but it’s more of a modern take on traditional dishes. It has a casual vibe, and the wine list is really good. They have some good natural wines, which I really like.

As Bifanas Do Afonso is only a two minute walk from Prado restaurant and they serve the best pork sandwiches in town. It’s my favourite dirty Portuguese food. I want to highly recommend this place, but I don’t want it filled with tourists. It’s amazing, super small and it’s very, very cheap.

At Prado, you should never skip the bread course. The beef tartare wrapped in grilled cabbage is only a small bite, but it’s a classic. The grilled oyster mushrooms with fermented red-pepper sauce and buckwheat is definitely one of my favourite dishes on the menu. It only has three ingredients. It’s so simple. Somehow it tastes like Portuguese piri-piri chicken. The flavour is so similar, it’s ridiculous. It’s probably Prado’s most popular dish. It’s the one dish I haven’t been able to take off the menu. It has a Portuguese soul and shows the simplicity and casualness of the restaurant.