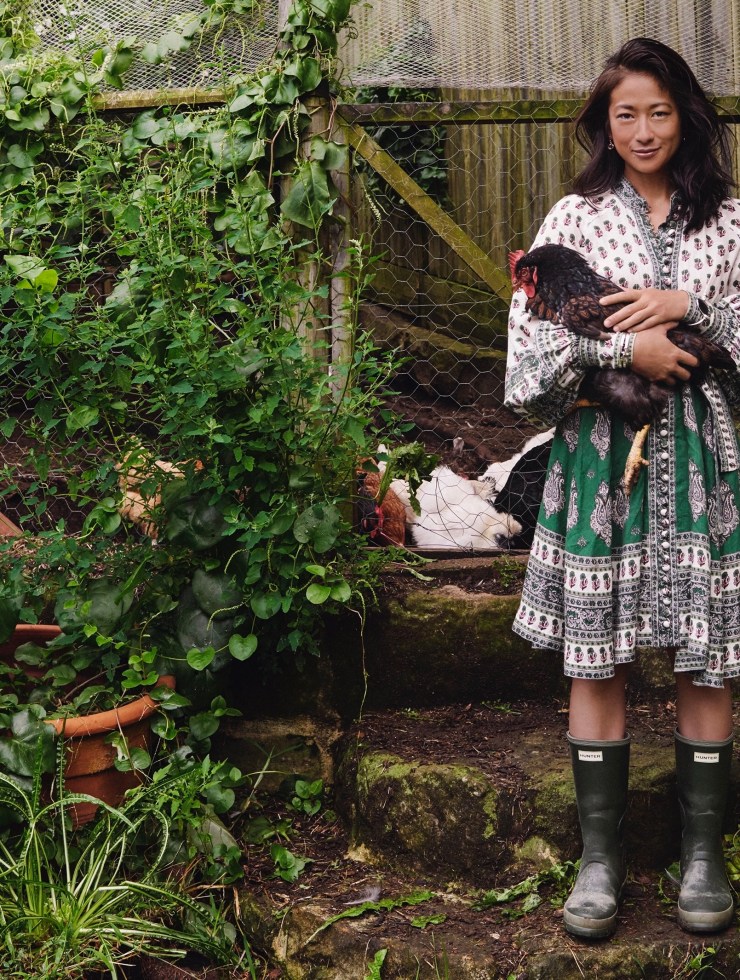 Palisa Anderson has been coming to Byron Bay since she was a teenager. “I’ve seen it change in small increments and then I’ve seen it change in big increments,” says the Thailand-born, Sydney-raised restaurateur-farmer. (Her late mother, Amy Chanta, is the founder of restaurant empire, Chat Thai). These days, Anderson splits her time between Sydney and Byron where she runs Boon Luck farm, the family’s certified organic property that grows produce for Chat Thai and other restaurants across New South Wales. When she’s done looking after the land, these are the Byron places Anderson and her family enjoy eating at.

We bought our farm, Boon Luck, in 2014 and now split our time 50-50 between Sydney and Byron. One of the main reasons we got this farm was because my mum wanted us to supply Chat Thai with holy basil through the year. I don’t come from a farming background. I grew up in the city. I had to learn lots of things on the ground. But I’ve always been interested in the natural world and I’ve always been interested in gardening. I’m a huge advocate for connecting nature corridors around farmlands. As private landholders, we have a responsibility to regenerate the areas that we don’t use. One of the farmers here that I’ve known for a long time used to grow a lot of Southeast Asian vegetables because there was a big Southeast Asian community up here, but then they all started growing their own stuff. Then there was a big influx of West African refugees in the mid-2000s and then he started growing things for them, and then the Brazilians came. With every influx of new groups of people, I’m seeing a broader range of produce grown and taken to markets which is really interesting.

A Family-Run Persian and Israeli Restaurant

There’s a place in Mullumbimby called Adama Home Cooked that does rustic Persian and Israeli food. It’s run by an Israeli couple and their 20-year-old daughter and two younger kids who work there Monday to Friday. It’s fantastic. My kids are addicted. The menu changes all the time, but it’s basically whatever they want to cook and everything has to be bain-marie-able. All their food is really incredible and really great soul food. They do these wraps called araisa filled with lamb mince which is like a shawarma. And they make their own flatbread and tahini. It’s totally the most legit Middle Eastern place we’ve eaten. They’ve been locals for like 20-something years and have had multiple businesses over that time. They’re just really lovely people. They have cold-pressed pomegranate juice. It’s nothing flashy but it’s just amazing. They have great vegan options as well like ful medames (slow cooked broad beans). Half the menu is vegan. It’s the best food I’ve eaten around Mullumbimby for a long time. I want more places like this to do well and stick around.

Kouzina is in the industrial area in Byron Bay and is our weekly favourite. It’s run by Phoebe Tunis and her mum Themis and they serve a really authentic Greek, three-course family style-meal. It’s like being in Greece. You sit down and have a cold antipasti course and then its whatever they’re cooking. All the meat is charcoal-grilled. And because they’re in Byron, they cater to all dietaries. It’s a real non pretentious place. They did everything themselves, including the interior. The lace curtains make you feel like you’re really in Greece. At the end of service, Themis will get everyone to do Greek dancing. That sounds a bit naff but it’s not. They’re just really lovely people. The vibe is really great and really fun. It’s really classic. She’s really into organic produce, and sources her meat really well. They get local farmed chickens and lamb and beef from the area. We take it for granted around here how good the produce is. Everything’s farmed around here. You can’t eat like this in Sydney.

Another Reason To Dine in the Industrial Area

Barrio is a really lovely spot that’s inside a little compound called Habitat in the Byron industrial area and was the first place to open there. Chef David Moyle has always been about local producers. Here he’s doing a lot more Middle Eastern cooking, but Middle Eastern meets Byron, you know? He’s cooking a lot of flat breads including one with roast chicken, freekeh, tahini and yoghurt. The food is really tasty and delicious. You can just go there and pick up some stuff from the deli counter as well. Before the Australian bush fires, there was an electrical fault in the kitchen that caused a fire and the whole kitchen burnt down. The restaurant had to close for a really long time. But now they’re super busy again. Barrio was predominantly a breakfast and lunch place: now it’s open a few days a week for night time trade too.

The Star of Brunswick Heads

From the time Fleet opened, I totally fell in love with the space. It’s like being in someone’s really well-intentioned kitchen counter. Everything has its place, not just in the kitchen, but the bar, too. Rob Mudge is the co-owner and barman as well and he’s put together the cocktail list. Co-owner Astrid [McCormack] is on maternity leave so Olivia Evans is running the restaurant and she’s wonderful. Olivia’s truly into her organics and natural wine. The way she talks about the wine, you just want to taste and drink everything. It complements chef Josh Lewis’ food really well. He must have been one of the first chefs to use nutritional yeast in a dish. Five years ago before everyone started using it, he had it in a dressing for a raw kale salad. There are so many things that Josh does well, but it’s his vegetable dishes that really shine. His meat dishes are fantastic as well. I love that there’s a playfulness about the food. It’s fine-dining but in a kind of fun casual setting. There are only three staff plus a dishie Daiki who’s a Japanese dude who, during lockdown, was making ramen packs to go. It was really nice of them to give him that platform. La Casita, which is also owned by Astrid and Josh, is a little Mexican beer garden that’s lots of fun. It’s really good for a casual dinner.

Also in Brunswick Heads, but a lot more casual than Fleet, is Cadeau which opened the week before the Covid lockdown. The owners, who recently moved back from London, had a really hard time with it. Holly was originally from Auckland in New Zealand but moved to London and was front-of-house at The Clove Club. Giorgio is Swiss-Italian and grew up in the alps and has cooked at The Ledbury in London. They came back because they were going to have a baby and were living in Sydney looking after someone’s Airbnb before they decided to move up. It’s great because now Brunswick has two really amazing, world-class restaurants. Giorgio has good technique, really loves the area and has been cooking with all the local produce. He has really interesting stuff like crumbed brains and a beautiful black pudding on the menu. On Sundays, he does a Sunday roast lunch with yorkies [Yorkshire puddings]. It’s really delicious soul food but presented well and executed beautifully. Holly’s put together a really beautiful wine list. We go there every Sunday for a really late lunch.

Ice Cream That’s Good For You

Wal Foster-Eyles was a chef at [Byron Bay restaurant] Harvest, but now he’s got a little ice cream van set up in front of his house called Natural Ice-Cream Australia. What I really like about him is that he’s all about ice cream for gut health. He understands food and uses all sorts of aromats and native ingredients. He was making an ice cream with emu egg, bush lemon and kefir grains. We just ate a coconut yoghurt ice cream with coffee syrup, and he had this kind of snow cone that he did with rosella, Davidson plum and mulberries. It’s really, really delicious. He’s also done these little ice cream pops that are covered in a single-origin chocolate made in Melbourne.

A New Face At An Old Favourite

Raes on Wategos has been a restaurant that has had a lot of ups and downs. Jason Saxby is the new chef at Raes and came from restaurants like Pilu and Russo & Russo in Enmore. When he was at Quay, he also won the Josephine Pignolet young chef of the year award and he’s also worked at The Ledbury. He’s a really hard-working dude that gets shit done. The food that he’s doing is like coastal Byron Bay: meats, Italian salumi, native ingredients, the best of local produce. His pastas are amazing. He does a really amazing Moreton Bay bug cappellini with a burnt butter and caper sauce. He’s really agile and clever in that he can change the menu at the drop of a hat. He’ll understand if I say, “this week the celtuce is looking really good but the flush of hot weather has made them bolt. I don’t want to send them out because they’re bitter”, and he’ll be like, “well, what else do you have that I can use?” He’s a great technical chef but he understands the produce. It’s really hard to find chefs like that. And he’s really astute. He’ll always call me up and check in with me asking what’s going on in the farm, what I’ve got coming up. He gets local fishermen to send him whatever they catch. He also works with Pocket Herbs, a local mob that works with the Currie Country ladies, who bring in natives and teach the people at Pocket Herbs how to grow them. They also pay the Currie Country ladies an IP fee which is really great.