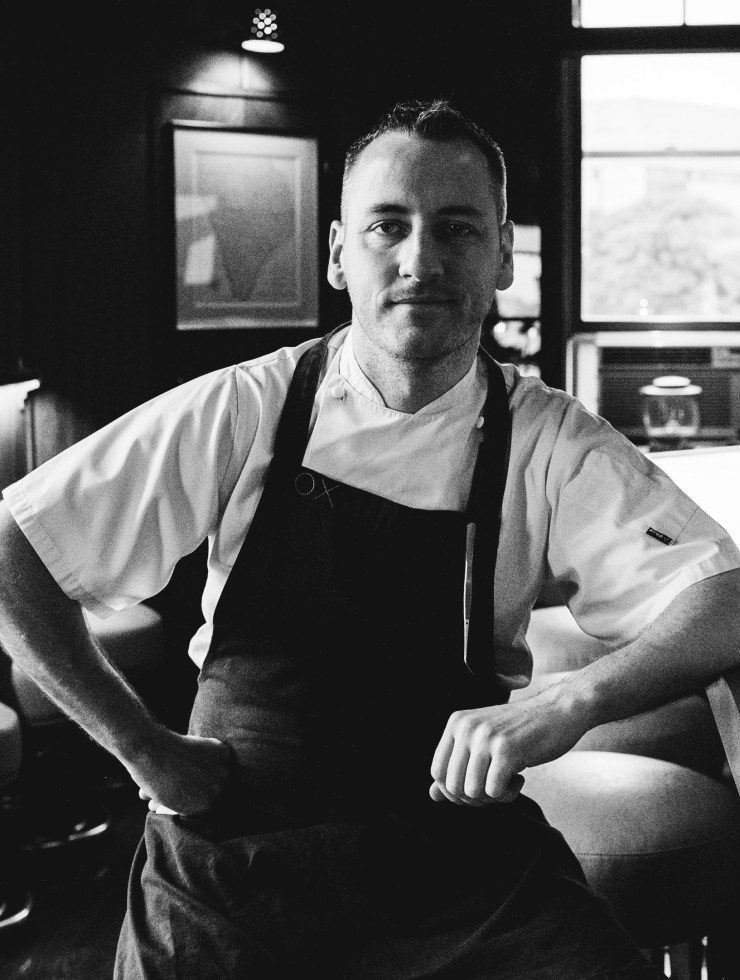 Stephen Toman is a Belfast boy, through and through. But while Toman was born in Northern Ireland, it was his time in America and France (in particular, stints at Parisian institutions L’Arpege and L’Astrance) that defined him as a chef. Today, he is the force behind Belfast’s Ox Restaurant: a kitchen committed to celebrating seasonal flavours. Local will always be best for Toman, whether he’s talking produce, or places to eat and drink.

Belfast is a big village, it’s not a massive city. Most of our customers are regulars, so we have to fight really hard to make sure the customer has a great night and is going to come back. We know how crucial the customer experience is, and it’s why Belfast hospitality is so amazing. What’s unique about Belfast and Northern Ireland, is that we’re so close to where all the produce is coming from. We’re 15 miles away from where we get our vegetables and five miles from the coast. Everything’s on our doorstep. It means that we have these amazing and very personal relationships with growers and suppliers. And we’re really pushing our growers to try stuff they’ve never tried before. For example, I cook a lot of potatoes in seaweed, which adds a lovely and rich natural saltiness to the potato. I asked one of my growers about two years ago: “can we grow a local potato in seaweed?” And he actually pulled it off. We got our first crop last year. They’re beautiful. We just poach ‘em, peel ‘em, and serve them with a nice red wine butter sauce made with seaweed and sea herbs. It’s fantastic. It’s hard to beat Irish seafood. Our shellfish, scallops, lobsters, mussels, the crabs: they’re absolutely second to none. And of course, our oysters. A lot of bars around the coast are famous for doing native oysters and a nice pint of Guinness. Sitting next to a roarin’ fire, it’s just perfect.

Shu is a fantastic neighbourhood restaurant and one of the longest serving restaurants in Belfast. The city is very young in terms of the restaurant stage, and Shu’s been going for a good 15 years which is quite old for the Belfast food scene. It has a fantastic chef and he’s bringing in local, seasonal produce to make beautiful brasserie-style food. Things like a great cote de boeuf to share or a lovely dish of baked cod and almonds. The salads are fantastic, too. You’ve got a very competent kitchen and great service out the front. It’s busy and it’s buzzing, and for good reason.

The Muddler’s Club is just pure rock ’n’ roll. It’s very cool. It’s very loud. The chef – and one of my best mates – Gareth McCaughey, has his Harley Davidson parked out the front. The chefs are all inked up and cooking great food. The restaurant got its first Michelin star this month [October 2019]. The menu is a very similar concept to what we do at Ox. Gareth worked with me for a few years and understood how good it is to have a blank canvas each night. He’s doing a blind tasting menu with his own approach to celebrating local produce. It’s a bit of a chaotic approach compared to what the norm is suits that dark, edgy vibe and the music he’s got playing. The cocktails are also fantastic. There’s a signature smoked Old Fashioned that’s served in a glass skull. You open it up and it’s full of smoke that comes pouring out. It’s fantastic. You have to start off your night with one of them, then you know you’re in the Muddler’s Club. The name actually comes from a secret society that used to exist in Belfast a couple of hundred years ago. The Muddler’s Club would hold their secret meetings on the street where the restaurant is located. Gareth really did his homework, and there’s graffiti and murals paying homage to the club throughout the restaurant. It’s very cool.

The City’s Oldest Pub (And Its Neighbour)

Mourne Seafood is all about seafood and does it fantastically well. Things like freshly cooked crab with a bit of wheaten bread; a nice pot of mussels; lovely grilled dover sole; beautifully crisp squid; oysters which they’ve got out on display and, of course, pints of Guinness. Next door is Kelly’s Cellars, the oldest pub in the city, so it’s a good excuse to go for one more pint. There are bar stools out the front and traditional music. It’s a real kind of happening part of town where you’ll find both locals and tourists having a good time together.

Marty Murphy, a good friend of mine, has a place called Howard Street. He’s fantastic with spices and you can see this is his food. He has his own eclectic style of cooking which he pulls off: he’s a very competent chef. Next door to Howard Street is a beautiful little wine bar that he’s opened called Ora. It’s really cool. It only opened a few months ago and it’s just flying. It’s all about amazing cocktails, a superb wine list and tapas. He’s cooking meat over the grill and doing oysters with tasty dressings. There are lots of small plates with things like amazing pork belly with miso and pear or their cauliflower cooked in cumin. It’s tasty food that you really want to eat, and it’s great for a fun night out. It’s also right beside the opera house – he does a fantastic pre-theatre menu.

The Perfect Sunday With Friends And Family

Wine and Brine up in Moira – a quaint little village only 20 minutes by car from Belfast – is the best way to spend a Sunday with friends and family. The food is absolutely delicious and always cooked perfectly. Chris McGowan is a very talented and skilled chef. He’s big into using the whole animal. As the name suggests he brines all his meat and cooks it kind of traditionally. You’ll be sitting around a big table full of plates of roast meat and vegetables. You know: a pass-me-the-spuds kind of deal. There’s a great wine list, too. It’s an amazing spot for Sunday lunch. You’ll love it there.

Stock Restaurant has just opened inside St George’s Market which is our local market. It’s a great addition to the street and is only a five-minute walk from my restaurant. Danny Miller the chef is down in the market every morning to pick the fish off the stalls and putting them up as a special for the day. Things like dover sole and turbot that he’s just bought off the fishmonger five minutes ago and serving it as a whole fish for the table. It’s just fantastically cooked local food. Pint of Guinness, a bit of craic, good Irish hospitality. And that’s what Danny’s all about. He’ll do a nice whole brill, cooked in nice butter in the pan, served to the table in the pan, skin-on, nice side of potatoes, lovely broccoli and a good glass of wine. People are just helping themselves, picking the fish off the bone.

General Merchants is a fantastic place for breakfast and brunch. Tim Fetherston worked in Australia for many years but came back home and brought that Australian brunchy style that Belfast had never really seen before. He was the first person to really do that here. He’s expanded now and there’s two of them with one on each side of the city. He’s really big into his coffee. It’s just a cool kinda chilled-out, kinda hipster brunch vibe. Sometimes Gareth and I will go to the gym on a Monday and straight after the gym we’ll go over to General Merchants and have a Manwich with a coffee. The Manwich is a lovely sandwich with local black pudding, poached eggs and a spiced relish in a soft buttermilk roll. It’s amazing. The black pudding is just outstanding.

A Place You’re Proud To Send Somebody

Overwood is another new restaurant just opened up in a country pub called Balloo House. The chef is Danni Barry, a very talented chef who’s moved out to the country and doing her own thing and cooking everything over wood, hence the name. It’s fantastic and not too far from the coast: maybe a 20-minute drive from Belfast. There’s a little tempura: Jerusalem artichokes and stuff like that. There are oysters and different citrus dressings. Perfectly cooked roast beef for the table, like a nice cote de boeuf served beautifully pink. That kind of family-style service and really confident cooking. The room is absolutely stunning. It’s a place you’re proud to send somebody because you just know they’re going to have a fantastic lunch.

The Best Pizza In Belfast

Little Italy is famous for late-night pizzas in Belfast. They’re right beside one of the busy bars and they’re open quite late. You go and you watch the gang make the pizza right in front of you. You have to wait. Half the time you’re half-drunk. Most times it’s eaten before you even get home. You’re just eating it straight out of the box. It’s just fantastic. There’s always a queue right outside the door, the pizza’s that good. I’m a simple pizza eater and always go for the pepperoni. I can’t not order pepperoni pizza.

At Ox we have no menu. The customer sits downs and we give them a list of about 30 ingredients, the best local and seasonal produce we can get our hands on: kohlrabi, kale, truffles, chestnuts. They only see what they might expect to eat throughout the six-course tasting menu, and then they leave it in our hands. It’s a total surprise. The menu last night is different to the menu tonight. We’re always changing. Always getting better. Always pushing ourselves. The restaurant has become a living thing where we’re just constantly growing. It’s not just the restaurant that’s moving forward. When we first opened, this idea of not knowing what you’re going to get was completely foreign to Belfast. People tend to stick to their favourites. You know, we’d have people ask, “Can you just give us a steak?” We were asking them to go into the unknown. But within no time at all, customers understood and accepted what we were trying to do. They were believing in our skills and capabilities and giving us their trust. We’d hear so many customers say, “You know, I ate things tonight I wouldn’t normally order, and I really enjoyed it.” People were loving it and we were buzzing. We’ve only continued to grow from there. I feel like we could compete in any city in the world and that’s something that we’re very proud of.

The Irish Are Coming

Ireland is absolutely causing a storm in the food world, if you ask me. Half the chefs doing their own thing in Belfast are people I grew up with. We all come up through the ranks together. And we’re all wanting each other to do well. We’re all trying to develop the local food scene, and certainly trying to evolve what we used to think of as Irish cuisine. We just want our food, and our city, to stand up with any other city in the world. We’ve got the skills, we’ve got the produce and everybody’s just going for it.