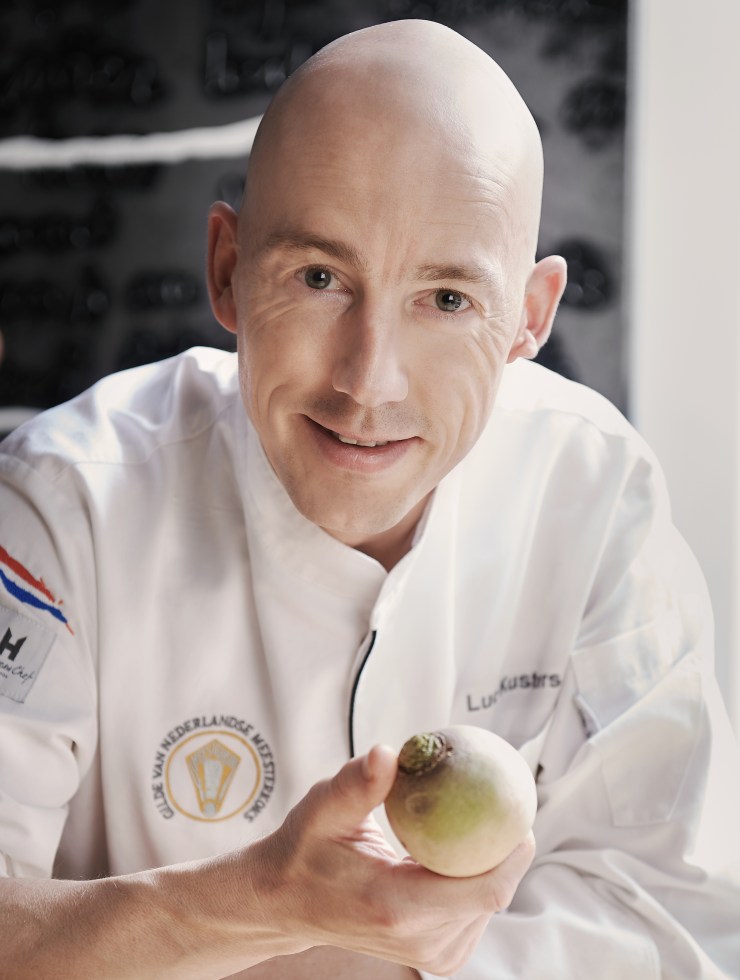 Luc Kusters is all about two things: getting people to eat their vegetables and celebrating Dutch food. The chef at Michelin-starred Bolenius and one of the founders of the Dutch Cuisine movement describes his cooking as New Amsterdam and is passionate about local produce and producers. He’s equally excited about ensuring visitors to the Dutch capital see – and taste – the real Amsterdam, as demonstrated by this insider’s guide to his home city.

We have a movement here in Holland which is called Dutch Cuisine and I’m one of the founders. It’s a young movement that’s only five years old but we’re getting somewhere. It’s based on rediscovering the Dutch kitchen and is based on local dishes that we have. We feel like it’s a bit forgotten because the French kitchen took over, but because of the knowledge and information from the French, we’ve reached a good level in Holland. These days, we’re interested in gastronomy in Holland and celebrating our own culture and dishes. We’re bringing Dutch cuisine back to the menu with a modern approach and a lot of vegetables. It’s a good model and one we follow at [my restaurant] Bolenius. It’s great to see a lot of restaurants in Amsterdam adopting this approach. It’s an exciting time to cook and to eat in the city.

My Best Advice For Visiting Amsterdam

When people visit Amsterdam, they always walk around the canals, but they should go to areas outside of the city centre, too. These areas are way better and a lot cheaper, especially when it comes to eating. We have seven districts in Amsterdam, and for me, they are all more interesting than the city centre. It’s the best advice I can give you for Amsterdam.

I love Restaurant De Kas which is a greenhouse restaurant here in Amsterdam (kas is the Dutch word for greenhouse). It’s been open for a long time and is recognised by a lot of guides, but it’s been taken over by two new young guys that have introduced a new cuisine. My old sous chef is now the chef and the restaurant has been reinvented. The restaurant has always been known for using ingredients from the greenhouse and having a very vegetable-centric menu, but there’s now a lighter approach in the kitchen. They’ve removed the classic French influence and made way for a more modern and more Dutch approach. I always go there with friends or people who are visiting the city.

Where All The Chefs Eat After Service

Chinese restaurant Taste of Culture is a late-night place where all of the chefs go after service. It’s one of the few places that’s open till after midnight, and it’s great because you can go there to just drink a beer and order some nice snacks, or you can go there to eat a good meal. When I was younger, we would go directly into the bar, but now that I’m getting older, I have to eat otherwise I can’t drink beer anymore. Because we go there often, they know us well, which means we’re allowed to order from the Chinese menu. They have two menus: one for the tourists and one for the Chinese people, and those few lucky people who they know well. And that’s a bit of a hidden treasure. If you can ask for the Chinese menu, you should. You can eat everything. It’s really so great – you get to try all of these things like duck tongues and claws that you don’t normally eat and most of the time, it’s delicious. It’s a lot of fun and has a nice atmosphere.

Vegetable Dishes On The Harbour

Restaurant BAK is known for its great use of vegetables. It’s another one of my favourites. It’s not in the guides. It’s not in Michelin. It’s not on Lonely Planet, but still, it’s a nice place and serves good food. It’s in an old packing warehouse on the harbour, so it has a nice atmosphere.

Industrial Dining In A Container

I live in the north of Amsterdam where there are a few industrial-style venues. One of these is a restaurant called Pllek. It’s built from containers, so when people go there, they’re like, ‘where the hell am I going?’. If you walk in, you can see that it’s temporary: I think it’s allowed to stay there for six more years, but in the end it has to go. It’s a really typical low-profile, Amsterdam-style place serving comfort food using really good ingredients from local vegetable farmers.

A Café With Great Food And Belgian Beers

Stadscafé Van Mechelen is not your typical Amsterdam café. What separates them from most other cafes is the food. Most of the cafes in Amsterdam, unfortunately, have bad food, but here, the food is very, very good. It’s always been my favourite local bar because if you just go for a beer, or a coffee in the afternoon, and you decide to eat something, it’s always good. That’s quite special in Amsterdam these days. Mechelen is a city in Belgium, so there’s a lot of special Belgian beers as well. And a really nice atmosphere. I always go there when the weather’s not nice because it’s a nice place to be inside. It’s just outside the tourist centre which is good to note, too.

How (And Where) To Eat Herring, Amsterdam-Style

A lot of tourists think herring isn’t delicious, but that’s because they haven’t eaten good herring. Good herring is as good as caviar. It’s the best. At some places you might pay €1, but for really good herring you might pay €3.50. It’s more than double the price, but six times as good. A lot of people don’t realise, but there’s a big difference in quality between all the herring shops. The one I recommend is Haringstal de Zeevang. Ironically, it’s a little, lousy place, but it has the best herring (and it’s nearby the bar I mentioned, Mechelen). I always go here when I want herring, especially in the first weeks of the season (June). The Dutch way is to hold the herring by its tail and eat it, but in Amsterdam, we always cut it in pieces and then you can add onions. Start with the front and the tail piece and always end with the piece in the middle: because it’s the best. That’s my way. With a good herring, you’ll taste that saltiness for half an hour: it’s delicious.

My Nomination For Our National Dish

Persijn is another Dutch restaurant that I am involved with. We call it a Dutch eatery that has typical Dutch dishes with a very local approach like stamppot which is like mashed potato with escarole. My favourite dish is the endive stamppot which should be our national dish, but it’s not as familiar as, for example, paella. We have a long way to go, but at least we’ve started.

The Restaurant That I Keep Going Back To

It’s hard to pick out a favourite restaurant in Holland, but the restaurant I’ve been to the most is De Groene Lantaarn. It’s a two-star restaurant that’s 100kms inland. It’s nice and quiet and easy-going. It’s like a totally different world and completely different to the city. The chef there is a good friend of mine and he’s doing Dutch cuisine as well, based on local ingredients and culture.

The best poffertje (Dutch pancake) restaurants are outside of the city. My favourite poffertje house to go to with my family is in Leiden, and it’s called Pannenkoekenhuis which translates to pancake farmhouse. It does a great job. It’s an old farmhouse and is very typically Dutch and nice. It’s only 15 minutes from the city centre by car. In the middle of Amsterdam is Holland’s Snoepwinkeltje, an old-fashioned candy store that has jars full of Dutch liquorice. I really like it and should go there more often. It’s good that we’re talking about this: I’m going to get a new electric bike and take the bike there and buy some liquorice.