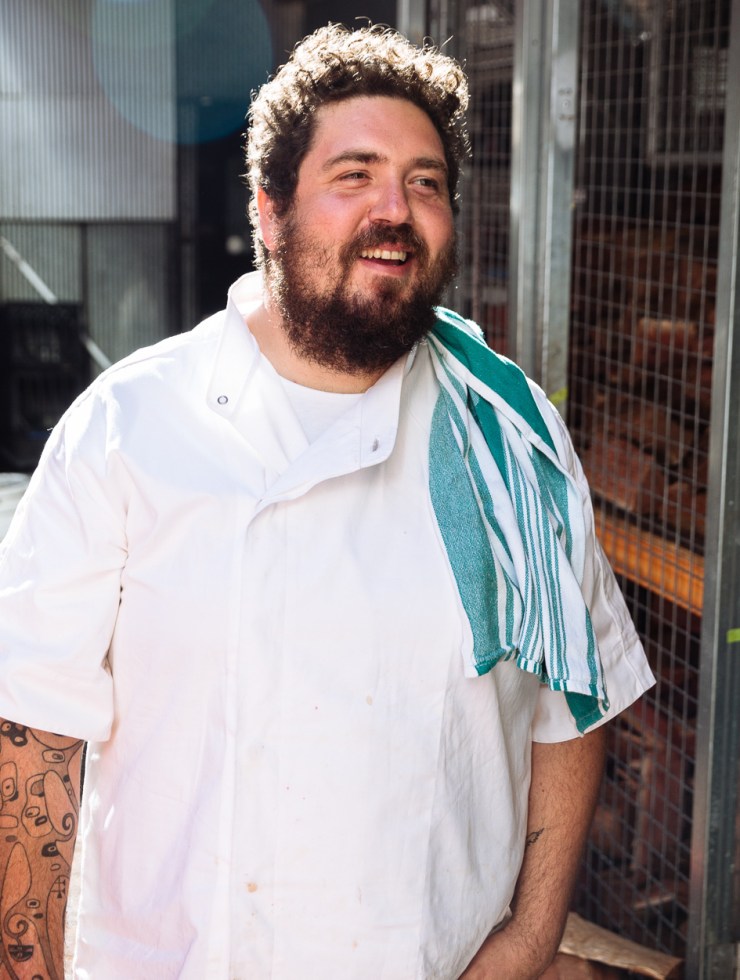 An “African-ish” restaurant in the east end of Adelaide, Africola is a riot of colour, sound and flavour. At its heart: Duncan Welgemoed, a towering South African turned South Australian that’s made a name for bold, wildly delicious dishes like chicken skin sandwiches and whole-roasted cauliflowers. He’s a frequent sighting at events and restaurants around Australia and the world, but Adelaide – and its treasury of singular bars and eateries – is his happy place.

An Introduction to Dining in Adelaide

Adelaide’s dining scene is consistent and consistently good. It’s a smaller city [than Melbourne or Sydney], but I would say the actual dining demographic is a lot more sophisticated. You’ve got a lot of farmers. You’ve got a lot of winemakers. You’ve got a lot of people that travel fucking heaps. They recognise good produce, good booze and good food. To convince them to dine in your establishment, you’ve got to be offering a pretty good product which in turn lifts the whole scene up. You can’t rest on your laurels in this town. Adelaide has always recognised what’s good and what’s shit and it supports what’s good.

The most exciting restaurant in Adelaide right now would be Leigh Street Wine Room. It has on-point small dishes and an incredible wine list that’s been done by Meira Harel [formerly of Grossi Florentino and The Town Mouse in Melbourne]. That married with what chef Nathan Sasi is doing in the kitchen and Nathan’s wife Sali running the floor ensures it’s certainly somewhere I’ll keep going back to just to see what they’re doing. Nathan’s known for his smallgoods (cured meats) and these smallgoods are fucking legendary. They’re absolutely stunning. His grilled tongue skewer is awesome, as is the focaccia that every table gets.

Some Of The World’s Best Afghani Food

Parwana is one of the most consistent restaurants in the fricking world and home to some of the best Afghani outside of Afghanistan and maybe even including Afghanistan. As the story goes, Mama Ayubi used to be the chef for the king, and the food served at the restaurant is a banquet feasting, royal menu while the food at off-shoot Kutchi Deli Parwana is more of a celebration of street food. The Ayubi family do what they do with absolute heart, integrity and flair, but it is a family restaurant. It is run by the family, cooked by the family and served by the family.

Ying Chow is like a dirtier version of Supper Inn in Melbourne. It’s cheap, cheerful and abrupt, but it’s open late and it’s a good time when you’re drunk. Everyone’s got their favourite dishes: but my go-tos are the ma po tofu, the BBC – short for bean curds, beans and chilli – and the salt and paper eggplant.

Where To Get Good Coffee

Exchange Coffee is literally just around the corner from us so I use it for my meetings. The coffee’s sick, the food is really interesting and the service is good. The water is at the right temperature and has the right sparkle: it’s really laser sharp like that

Hey Jupiter is like an all-day France-Soir [restaurant in Melbourne] and is all about owners Christophe and Jacqui. For breakfast you can have the croque monsieur or the continental breakfast with hams and pastries and a little bottle of champagne, then move onto lunch for steak frites or daube of beef. Then in the evening you’re having caviar or really good French classics like coq au vin or feu. It’s unashamedly French and great.

Where To Drink Wine In Adelaide’s East End

Hellbound is a proper South Australian wine bar. When I say it’s South Australian, I mean it’s a clubhouse for winemakers, chefs, hospo workers, fashion and PR people. The wine list is built on what we want to drink. It’s got a really great natural selection and the spirit collection is excellent because of Reggie [owner Mark Reginato also owns wine and spirit distribution company, Connect Vines]. It’s a good showcase for his portfolio and the Worlds Apart Wines that co-owner Louis Schofield makes. East End Cellars is our local bottle shop and it’s really good to go and smash a few glasses at. There’s also Mother Vine which is opposite and more for late-night, serious wine drinking. It’s got an exceptional, exceptional cellar.

I like going with the family to Meze Mazi which is around the corner from our house. It’s probably Adelaide’s best Greek restaurant. You’ve got the real old-school hospitality of owner Andrew Papadakis who’s the type of guy that remembers the table every customer likes and their first drink order. The food is genuinely fucking delicious: really well cooked, really well seasoned and with some interesting stuff on the menu. There are some great Greek wines and spirits. It is a proper, proper Greek family restaurant.

My Recovery Meal The Morning After

There’s a place called Pho Minh which is like the super, super OG gangster pho joint. I get the oxtail pho with a side of broken rice with meat, eggs and chilli sambal. Generally when I’m there it’s to top up my serotonin levels from the night before.

It’s interesting to see the differences between the wine styles being made and drunk in each of South Australia’s wine regions and the styles of restaurant and customer. Vintners Bar & Grill in the Barossa Valley is an old-school, Francophile leaning restaurant that serves steak, pate and terrine. The wine list is fucking mental and it’s there for the Barossan winemaking family. If you want a snapshot of what those wine boys drink, go here. The Adelaide Hills winemakers go to Summertown Aristologist which currently hosts guests chef. I think the roving chef thing works because the menu is based on different people’s interpretations of natural food and natural wine. The produce comes from the garden and is hyper-seasonal. It’s a very complete narrative all around. That’s what I love about the place: it’s completely honest and open. The Salopian Inn in McLaren Vale is one of my favourite restaurants in Australia and run by Karena Armstrong: an incredible chef. Her food is very terroir-based and uses ultra-local ingredients but her cooking style is kind of country with a bit of Asian flair to it. Her roast duck is really good and her dumplings with chilli sauce are absolutely legendary.

Lost In A Forest is a really good place to stop at if you’re travelling through the Adelaide Hills with the family. It’s a super relaxed place to see some interesting wines and eat tasty pizzas. Just make sure you’ve made a booking.

Home Of The Cheapest Krug In Australia

The Exeter is the most iconic pub in South Australia. It is, in my opinion, the centre of Adelaide hospitality and everything grows from The Exeter. It’s that important. Adelaide wine writer Philip White was showcasing South Australian wine back in the day and The Exeter was probably one of the first pubs in the world to have an exceptional wine list next to everyday beers like Cooper’s Pale and Crown Lager. It’s also one of the cheapest places in Australia to drink Krug and you’ve got to drink it out of a beer glass. It’s absolute tradition. It’s also home of the famous Exeter daiquiri formulated by wine writer Mike Bennie. It’s a jug full of ice and equal parts of rose, white wine and red wine – all out of a cask – and two shots of gin. It is harrowing.

The Evolution Of Africola

I would say Africola has evolved to my style which is African-ish: my interpretations of African dishes using world-wide techniques. It’s one of the key community restaurants in South Australia and a place people eat at two or three times a week. It’s delicious. Its simple. It’s interesting. It’s value for money. We don’t follow any rhyme or routine or any service standard. It’s our show basically and we have fun doing it. And it’s female-led and run which is even more of a beautiful thing. My head chef Imogen Czulowski is one of the best chefs in the country; restaurant manager Nikki Friedli is on the floor and Gemma and Courtney are her 2ICs. It has a very powerful feminine energy and you can feel that. But when I’m working, it changes from very powerful feminine energy to extremely dramatic energy. I’m such a diva.